UM To Screen ‘Justice Is a Black Woman: The Life & Work of Constance Baker Motley’ 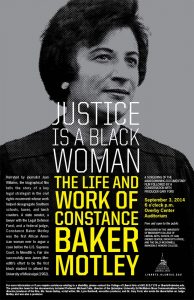 The University of Mississippi will host a screening of Justice Is A Black Woman: The Life and Work of Constance Baker Motley on Wednesday, Sept. 3. at 6 p.m. at the Overby Center for Politics and Southern Journalism.

Producer Gary Ford will participate in the showing of his award-winning biographical movie, which journalist Juan Williams narrates. It tells the story of Motley, the civil rights attorney who acted as legal counsel for James Meredith on his case to become the first black student at UM. Major cases she handled throughout her career also lead to many schools, universities and businesses being desegregated.

Some of the most important events in Mississippi history are covered in the movie, said Curtis Wilkie, Overby Fellow and Kelly G. Cook Chair of Journalism at UM.

“It’s so important to Mississippi history that young people today see this and and learn about some of the actors that were involved in all of the enormous changes that took place in this state in the late 1950s though 1960s,” Wilkie said. “(Motley) was a major figure and I think it’s important that students today know about her.”

Organized by the College of Liberal Arts, School of Law, Overby Center, Office of the Provost, and Sally McDonnell Barksdale Honors College, the screening is the first of what is planned to be a series of annual events focusing on issues of race that are to be held early each academic year. The events are intended to create a respectful community discussion to help sensitize students and encourage them to think about and discuss race.

“Constance Baker Motley is a singular figure in the civil rights era,” said Richard Forgette, interim dean of the College of Liberal Arts and professor of political science. “She’s someone people need to know more about. This is an opportunity to learn more about her, but it’s also an opportunity for the university community to have a dialogue about race. The hope is people can watch the video and there will be a good discussion afterward.”

Motley, a New Haven, Connecticut, native, served as a New York state senator and worked as a lawyer with the NAACP’s Legal Defense Fund. She successfully argued 10 cases before the U.S. Supreme Court.

Wilkie said she was one of many strong women who fought racism and segregation during the civil rights movement.

“So often in the movement the guys took credit for so much that was done, but there were so many influential, powerful women who were involved,” Wilkie said. “I think of Fannie Lou Hamer and also Marian Wright Edelman, who was a great civil rights lawyer. Judge Motley was also a major figure. She did her work in the courtroom rather than demonstrating in the streets, but she was a major figure in the civil rights movement, no question about it.”

She was a key legal strategist in other cases that helped desegregate schools, buses and lunch counters. Motley wrote the original complaint in the landmark Brown v. Board of Education case, in which the U.S. Supreme Court struck down school segregation in the United States.

She was also the first African-American woman ever to argue a case before the U.S. Supreme Court, Meredith v. Fair, which won James Meredith the right to enroll as the first black student at UM in 1962.

The production team for the documentary included Michael Calia, professor and director of the Quinnipiac University Ed McMahon Mass Communications Center, who was director/producer of the film, Susan Bailey, script writer, Lynn Bushnell, executive producer and Gary Ford, who wrote his dissertation on Judge Motley and was also a producer.

For more information, contact the University of Mississippi College of Liberal Arts at libarts@olemiss.edu or 662.915.7178.