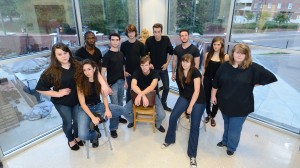 The 2013-2014 season for Ole Miss Theatre, themed “Beyond Boundaries,” continues with several performances of the “The Laramie Project” beginning at 7:30 p.m. Thursday (Sept. 26) at Meek Hall Auditorium.

The play tells the story of Matthew Shepard, a gay man who was kidnapped, tortured and left on a fence to die. The killing in Laramie, Wyo., drew worldwide attention in 1998.

General admission tickets are $12.50 for adults, $9 for University of Mississippi students with ID, and $8 for senior citizens. They are available at the Ole Miss Box Office in the Student Union, by phone at 662-915-7411 or online at https://www.olemiss.edu/depts/tickets/.

The play deals with issues of homophobia, forgiveness and healing, all of which are part of the theme of this season’s performances, which are intended to “raise awareness and understanding in relation to the human condition,” said Rene Pulliam, interim chair of theatre arts at the University of Mississippi.

“What we get from ‘The Laramie Project’ is a look at ourselves – as a community,” Pulliam said. “Sometimes what we see isn’t pretty, but other times, it is more beautiful than words can describe.”

The performance, directed by Rory Ledbetter, UM assistant professor of theatre arts, is written by Moises Kaufman and the members of Tectonic Theater Project. It features a cast of UM students.

The performance, which contains adult content, examines the openly gay man’s life, as well as his beating death, and also the trials of the people who killed him. It also tells the story of the people of Laramie and how they handled the tragedy and the worldwide media coverage that followed Shepard’s murder.