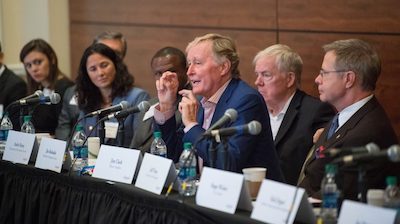 Experts from industry, government and higher education discussed advances on the horizon and ways that universities can help meet workforce demands and spur entrepreneurship Wednesday (Aug. 30) at the University of Mississippi’s second annual Technology Summit.

Dozens of widely recognized professionals from the computer, telecom, internet and cyber security industries shared insights about trends and advancements in technology during the summit, hosted by Chancellor Jeffrey Vitter at The Inn at Ole Miss.

“As chancellor, I want the University of Mississippi to be a national leader in STEM education, to partner with great companies, to shape students who will be exceptional employees in the industry and to remain a cutting-edge research institution in higher education,” Vitter said. “We want to face the challenges of today and meet the opportunities of tomorrow.”

Recognizing the contributions of Dr. Arthur Guyton, the legendary physiologist and faculty member in the UM School of Medicine, and fellow alumni Fred Smith and Jim Barksdale, Wicker praised the university as a place for innovation and growth.

“People in (William) Faulkner-land most definitely can come up with profound inventions while still being versed in literature, the humanities and other academic disciplines,” said Wicker, who chairs the Senate Subcommittee on Communications, Technology, Innovation and the Internet. “What products of Mississippi brainpower will we be proud of two decades from now? We’re here today to stimulate those brain cells.”

The senator said he also witnessed the signing of a memorandum of understanding between UM and Globalstar Inc. on Tuesday (Aug. 29). The agreement will establish a satellite ground station at the university with access to Globalstar’s constellation of satellites, providing limitless opportunities, he said.

The summit also complemented many of the university’s recent efforts in this area, including a new STEM building under development on campus and the chancellor’s initiative to establish a leading, interdisciplinary research and education program in data science. 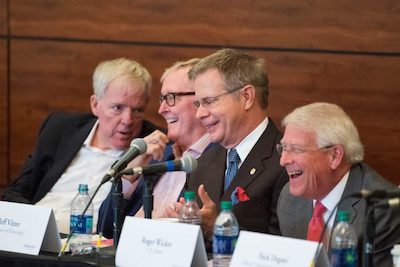 In his keynote address during the morning session, Jim Clark, founder of Silicon Graphics, highlighted the commonalities of companies he has founded over his professional career.

“I started Silicon Graphics in 1982 with seven grad students from Stanford,” Clark said. “By the time I left it 12 years later, it employed more than 10,000 worldwide. We pioneered the idea of 3-D graphics.”

Clark recalled how he and Barksdale co-founded Netscape in mid-1994. The company was met with skepticism initially, but later revolutionized online communication, he said.

“Nobody believed that we could make the internet a commercial entity,” he said. “Twenty-five years later, our patented encryption technology is still the security backbone of the internet. I believe that is the singular most important thing Netscape ever did.”

He also shared how, following Netscape’s acquisition by AOL, he began Healtheon. The health care network later merged with WedMD.com and remains a standard in the industry, Clark said.

Nicholas Degani, senior counsel of the Federal Communications Commission, followed Clark’s address. The FCC is working diligently to close the communications digital divide between broadband users in urban and rural communities, he said.

“Through inclusion, investment and innovation, our goal is to make fast broadband connections available and affordable to all people everywhere,” Degani said. “We’re not where we want to be or need to be, but we’re extremely excited about the possibilities being presented by 5G networks and private capital investments.”

The afternoon session consisted of three concurrent panel discussions in which industry professionals and tech entrepreneurs underscored the need for more STEM-trained professionals to meet future demands on their industries.

For a full list of panelists and participants, visit https://techsummit.olemiss.edu/.