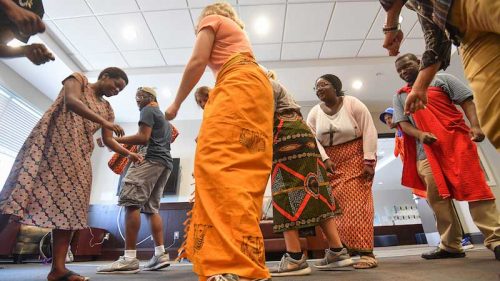 Like hundreds of students each year at the University of Mississippi, Estelle Blair signed up last fall for Spanish 101. But when the Brandon native decided that Spanish was not for her, she found a dramatically different alternative to fulfill her foreign language requirements.

Blair has joined a small, but growing, group of UM students studying Swahili. One of the university’s more uncommon academic offerings, the East African tongue is the 11th language taught by the Department of Modern Languages.

Although she took two years of French in high school, Blair’s decision to try Swahili was not totally out of the blue.

“When I was in high school, I took a trip with my family to Tanzania to go on a safari,” said Blair, a sophomore pursuing a major in biology with a minor in chemistry. “The people there were just amazing. Their attitudes and culture and their outlook on life were just amazing, and I just loved them.”

Swahili, also known as Kiswahili, is the primary language of the Swahili people and a common language across eastern and southeastern Africa, including Tanzania, Kenya, Uganda, Rwanda, Burundi, Democratic Republic of the Congo and Mozambique. It is the national language of Tanzania and Kenya.

Beginning its fifth year of operation, the Swahili language program is expected to enroll 26 students in two levels for the 2016-17 academic year. That’s far behind popular offerings such as Spanish, Chinese, Arabic, and French, but the number of UM students studying Swahili is expected to grow significantly, said Donald Dyer, chair of modern languages.

“Swahili is really making some strides nationally,” Dyer said. “The most rapidly growing languages at American universities are Korean, Italian and American Sign Language, but Swahili is sort of an up-and-coming language.

“We are proud to be one of a small and elite group of universities in the country that offers courses in Swahili.”

Neema Loy, a graduate teaching assistant from Tanzania, teaches the four Swahili courses offered at UM. Studying the language can provide insights into life in another part of the world, Loy said.

“To learn Swahili is to learn the language of East African people,” she said. “You also learn their way of living: their food, music, religion and culture.”

“When I first signed up to take Swahili, I was only thinking about fulfilling the core requirements for my major of taking at least two years of a foreign language,” said Snyder, from Eastman, Georgia. “I had no idea that I would fall in love with learning this language and one day visit Tanzania just to study this language further.

“I would definitely recommend this language to everyone because not only is taking Swahili a great conversation starter, but learning this language has been one of the ‘funnest’ experiences I have ever had.”

The emphasis on daily life in East Africa transforms the university’s Swahili program from a mere language class to a cultural education, said Crissandra George, a sophomore from Punxsutawney, Pennsylvania.

“So many language classes focus only on the grammar and vocabulary, but this class is so much more,” said George, who is majoring in Spanish and linguistics. “You learn the culture and history as well as the slang.”

Learning Swahili can yield benefits for a variety of academic majors, said George, who spent part of her summer studying abroad in Tanzania with Snyder and a group of UM students.

“A lot of environmental research and studies are done in Tanzania and regions surrounding it, thus helping science and engineering majors,” she said. “Also, anthropology, linguistics or really any social science is perfect to study here. The culture and language make it unique to study especially abroad.”

Loy, who earned a bachelor’s degree in English and Swahili from the University of Dae es Salaam in her native country, is pursuing a master’s degree in modern languages with an emphasis on Teaching English as a Second Language. She also serves as faculty adviser for the Swahili Club, which meets weekly during the academic year.

The club offers members and visitors opportunities to meet and have conversation with native speakers from Tanzania and Kenya, as well as activities to learn about Swahili culture.

“We also try our best to bring the actual Swahili world to the learning process, for example: doing real cultural activities in Swahili Club, cooking and dancing,” Loy said. “We also promote collaborative learning by video chatting with learners from other universities.”

The goal is to make learning the language fun, she said. The approach is a success, her students agree.

“Having a native-speaking teacher here at Ole Miss makes it a great place to learn this language,” Blair said. “The university continuously challenges us to grow as a person and a student, and this is just another example.”

Blair, George and Snyder each won one of the department’s language awards at last spring’s Honors Day. Although learning a new language is hard work, the experience of learning Swahili is unlike any other, Snyder said.

“I never thought in a million years that taking a language course would impact my life so greatly and influence the type of career I would want to enter into upon graduation,” she said. “Coming into college, I thought that I wanted to be a sports journalist, but learning Swahili has made me think about possibly working for an embassy one day or pursuing journalism that will allow me to use Swahili.

“Learning Swahili has shown me just how much effort and willingness it takes to learn a language, but how rewarding it can be to know that you are learning something that can help you relate to others around the world.”

Blair also has plans to use the language after graduation. Her goal is to attend medical school and become a physician, and she hopes to work with Doctors Without Borders, an organization that provides medical care for some of the world’s poorest people.

“My desire is to work somewhere in eastern Africa,” she said. “I want to learn the language so I’ll never need a translator.”

To learn more about the program, visit https://modernlanguages.olemiss.edu/swahili/ or contact Loy at nloy@go.olemiss.edu or 662-915-1295.