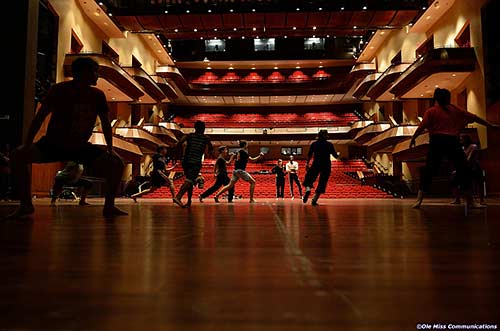 University of Mississippi students will perform an original 15-minute dance piece as part of David Dorfman Dance Company show “Prophets of Funk” at the Gertrude C. Ford Center for Performing Arts on Wednesday, April 9, 2014. The collaboration is part of the Ford Center’s programs held in conjunction with the South’s Arts’ Dance Touring Initiative.

In January, dancers from David Dorfman Dance spent three days with Ole Miss Dance and theater students. Jennifer Mizenko, UM professor of theater arts, says the Dance Company (the dancers and herself) are very grateful to Norm Easterbrook at the Ford Center for writing the grant that allowed this project to happen. The chance to construct choreography that will be incorporated into a professional performance is a first for the students and Mizenko.

“What is unique about this opportunity is that the work is actually an extension of a piece the David Dorfman Company will be performing, and we will be performing with this professional company at the Ford Center,” Mizenko said. “It is always exciting to have a guest artist come in and set a work on the students, and we are excited to be a part of the whole production process, from rehearsal, to tech, to performance in early April.”

The David Dorfman Dance Company was founded in 1985 and has performed in North and South America, Great Britain and Europe while being extensively in New York. David Dorfman and the company’s dancers and collaborators have been honored with the National Endowment for the Arts, three New York Foundation for the Arts fellowships, an American Choreographer’s Award, the first Paul Taylor Fellowship from The Yard and eight New York Dance and Performance (“Bessie”) Awards.

“Prophets of Funk” has been performed 34 times in 24 venues in 11 different states including a six night sold-out run at Jacob’s Pillow Dance Festival, The Joyce Theatre in New York City and the Lincoln Center Out of Doors.

This is a once in a lifetime chance for these 11 UM students.

“I feel that it is a wonderful opportunity not only to further our skills as dancers, but also to meet some wonderful people who are in the business,” said Starkville native David McKell, a freshman with a bachelor in fine arts. “It has been a wonderful learning opportunity. Everybody we met has been very willing to give advice and tell stories which creates a wonderful atmosphere.”

Tickets for “Prophets of Funk” start at $33 and may be purchased at the UM Box Office in the Student Union or online. The show is set to begin at 7 p.m.