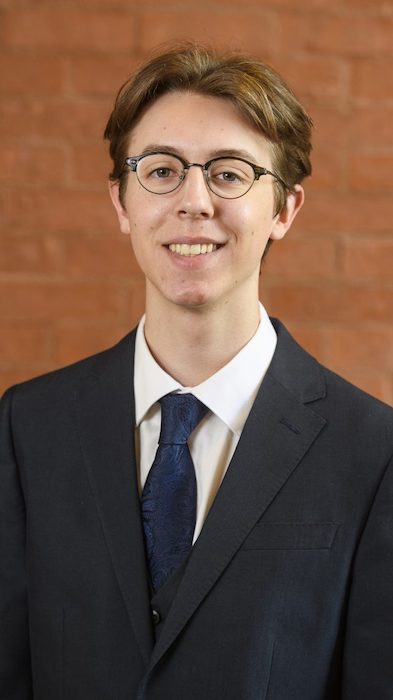 A University of Mississippi chemistry major who is pursuing research treatment methods that he hopes will eventually combat Alzheimer’s disease has been awarded a prestigious and coveted Barry S. Goldwater Scholarship.

Addison Roush, an Oxford native and junior in the university’s Sally McDonnell Barksdale Honors College becomes the 14th Ole Miss student, and the first since 2012, to receive a Goldwater Scholarship. Roush, who has an emphasis in biochemistry and a minor in mathematics, also is committed to providing leadership and mentorship to Lafayette County High School students.

The Goldwater Scholarship is the oldest most prestigious science scholarship available to undergraduates and recognizes college sophomores and juniors who show exceptional promise of becoming the next generation of research leaders in their fields.

“I feel extremely honored to have been recognized for my work in the sciences, and I am very grateful to the Goldwater Scholarship Board for this recognition and to Mr. Barry M. Goldwater for founding such a wonderful award,” Roush said. “There is truly nothing quite like receiving an award just for doing what you love.”

In his research with Joshua Sharp, associate professor of chemistry and biochemistry, Roush is developing new techniques to simplify the study of protein structures and their interactions. With data yielded through Roush’s research, scientists will gain a useful new tool with many applications.

He will continue building his knowledge this summer through a research training program where he will work alongside Dr. William DeGrado at the University of California at San Francisco.

In the long term, Roush aims to continue his work by developing ways to visualize protein-folding events as they occur. He hopes to apply the knowledge he gains to help combat Alzheimer’s disease and prion diseases such as Creutzfeldt-Jakob disease.

“I will continue to work with Dr. Sharp to further develop methods useful for performing protein structural studies,” Roush said. “I will be working with Dr. DeGrado to study the interaction between amyloid beta, a peptide that is strongly associated with Alzheimer’s disease, and TREM2, a potent genetic risk factor of Alzheimer’s disease, using cross-linking mass spectrometry.”

Sharp said Roush’s intellectual curiosity is unmatched among the undergraduate students he has worked with and exemplifies the attitude faculty members hope to nurture in Ole Miss students.

“Addison is driven by an intense desire to know, and moreover, to find out what’s next,” Sharp said. “When presented with a problem, Addison displays an intensity of thought, a capacity for self-motivated scientific exploration and a rare ability to find and ask the next important question in the field.

“His visits to my office to discuss his research are a constant delight, with Addison having new and productive ideas at every turn.”

Roush’s promising methodology and protocols through his independent exploration of the research problem continue to have a substantial impact on the group’s future research. His findings are being prepared for submission for publication and he will be the first author on the manuscript.

“I fully intend to pursue a Ph.D. in biophysics or a related field immediately after graduation, but I will likely not know where that will occur until this time next year,” Roush said. “Regardless of where I end up for graduate school, my goal is to study protein misfolding disorders and to continue my technique development work for these applications.

“I am particularly interested in both Alzheimer’s disease and prion diseases, such as spongiform encephalopathies. My hope is to eventually develop treatment methods that combat both of these disease classes.”

Roush said he discovered his love of chemistry while taking organic chemistry and changed his major from pharmacy to biochemistry as a result, even though it meant taking a fifth year to finish.

“Because of the nature of the (Goldwater) scholarship, I feel as if my career goals have been validated,” Roush said. “Academic chemistry research can be an extremely difficult field to break into, especially if one hopes to eventually work at a top institution as I do.

“Because of this, it is a supreme honor to have my plans for a career in research be recognized by such a prestigious organization.”

Along with the recognition of being named a Goldwater Scholar, selected students also receive $7,500. For the 2019 competition, more than 5,000 applications were submitted from 443 academic institutions, and 493 students were named Goldwater Scholars.

“We are extremely proud to count Addison Roush as one of the top biochemistry students in the country and happy the Goldwater Foundation recognizes the research excellence that occurs at the University of Mississippi,” said Tim Dolan, director of the UM Office of National Scholarship Advisement. “Addison has shown his commitment to research as well as to mentoring the next generation of science leaders.

“The Office of National Scholarship Advisement enjoys working with all students, but especially with Mississippi natives who demonstrate through their research and civic engagement that the University of Mississippi provides a rich environment for learning and that our students prove they are equal to their peers across the country.”

Roush’s previous achievements include membership in Phi Kappa Phi national honor society, being named a National Merit Scholar finalist and Early Entry 1 Classmate of the Year in the School of Pharmacy. He serves as president for the Ole Miss Section of the Student Members of the American Chemical Society.