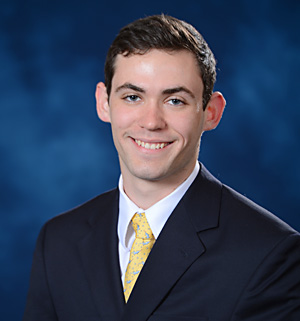 When University of Mississippi junior Colby Woods returns to school this fall, his journey will be much longer than driving from his Olive Branch home to the Oxford campus.

Instead, the international studies major will board a flight to Germany, where he will spend a year abroad as part of a prestigious UAS7 German Universities of Applied Sciences scholarship.

“I’m really excited because I know it’s going to improve me academically, and it’s going to be a great experience,” said Woods, who traveled to Germany the summer after his freshman year to study the language. “I’ve always been interested in learning about Germany after World War II. As I’ve taken more classes, I’ve learned more of its language, history, political system, economy and culture.

“It’s really interesting to finally put this in application when I go over there – I can actually speak to these people.”

UAS7, in cooperation with the German Academic Exchange Service, provides opportunities for students to travel abroad for academic credit and professional experience. Woods will spend his fall semester studying political management at Hochschule Bremen, one of Germany’s leading applied sciences universities, in Bremen. During his spring semester, he will intern at a company or research institute in his field.

“Learning a foreign language is an absolute necessity for any global citizen,” said Nicola Schmerbeck, instructional assistant professor of German and director of the UM Language Resource Center. “Studying abroad is one of the best investments any student can make during his or her academic career. Colby realized the value of his foreign languages studies in general and this study and internship program in particular. The experiences he will gain in the upcoming year will set him apart from his peers.”

During his semester abroad, Woods has three goals: to grow as a scholar of political structures within the European Union, develop as a global observer of intercultural relations and actively participate in a multicultural community, he said. He also hopes to choose a topic for his senior thesis.

“I want to choose a topic that requires me to contemplate complex matters of the European Union,” Woods said. “This includes the arguments of future enlargement in regards to Turkey, the methods resolving existing ethnic conflicts specifically in former Yugoslavian states or the effects of the European Union on national identity.”

Woods became interested in Germany in high school, and first traveled abroad the summer after his freshman year, to Osnabruck, Germany as part of the German Language Initiative, a program offered through the Department of Modern Languages and Study Abroad Office.

At Ole Miss, Woods is a member of the Sally McDonnell Barksdale Honors College, where he serves as student director, and the Croft Institute for International Studies. He is active in the Chancellor’s Leadership Class and the German Language Initiative.

“Colby’s a great student, takes challenging coursework and is involved in the community, but what makes him fit this program is that his passions revolve around Germany,” said Andrus Ashoo of the Office of National Scholarship Advisement. “He found a program that fit exactly the questions he was looking to answer. If he continues to go after opportunities that are very competitive and that fit him, I think it will take him really far.”

Before enrolling at UM, Woods attended the German Language Initiative’s on-campus intensive program at Ole Miss the summer before his freshman year. This summer, Woods is interning at the Sunflower County Freedom Project, a nonprofit mentoring program that provides academic and extracurricular opportunities to middle and high school students in the Mississippi Delta, before boarding the plane for Germany.