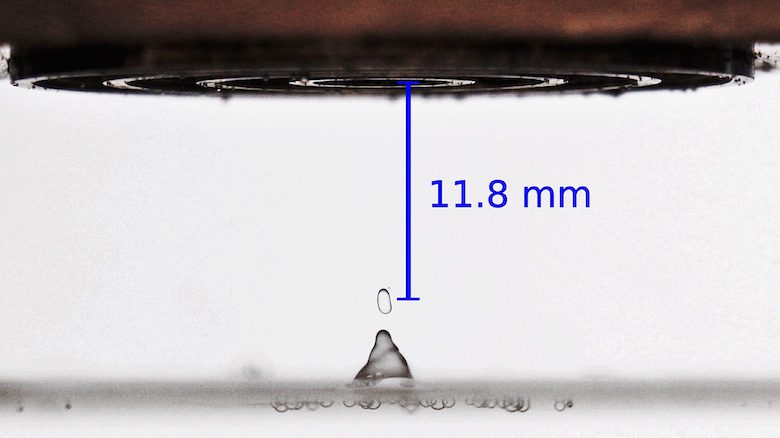 It’s a sonic marvel seemingly ripped from the fictional scenes of “Doctor Who” or “Star Wars,” what researchers are accomplishing at the University of Mississippi‘s National Center for Physical Acoustics, but in reality, it’s revolutionary research.

In a recent Physical Review Applied paper, scientists at the center announced they were able to sonically capture a droplet of liquid and move it without any direct or mechanical contact, using only acoustic waves.

The ultrasonic extraction and manipulation of the droplets are performed using a technique called near-field acoustic tweezers, which essentially uses sound as an invisible force field and is a new capability using the well-known tweezer phenomenon. The droplets being pulled out of a surface and then staying trapped by the sound waves is the key novelty.

“This technique allows us to draw droplets of a uniform size up into water that can then be moved in a controlled fashion throughout the water,” said Joel Mobley, UM professor of physics and astronomy and a senior scientist at the National Center for Physical Acoustics, or NCPA. 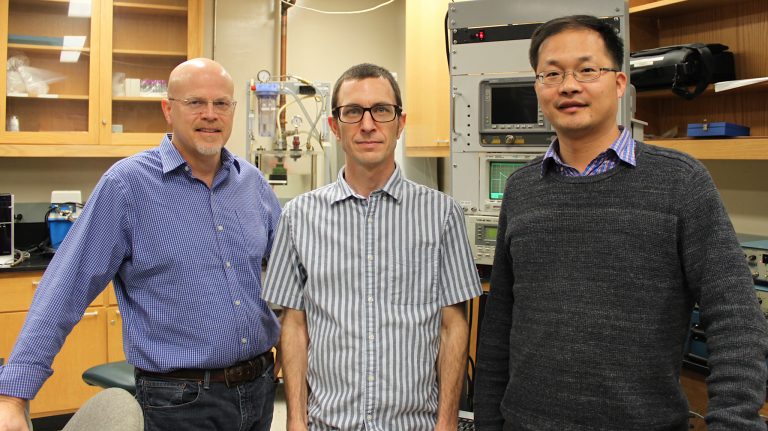 UM researchers Joel Mobley (left), Robert Lirette and Likun Zhang have published a Physical Review Applied paper announcing that they have sonically captured a droplet and moved it without any direct or mechanical contact using a technique called near-field acoustic tweezers. Photo by Shea Stewart/University of Mississippi

“There are many liquids – such as some solvents, hydrocarbons, etc. – that don’t mix with water, and this technology allows us to manipulate these liquids without any direct physical contact. This can permit the manipulation of liquids without contaminating laboratory equipment.”

The work has useful applications in chemistry or biology laboratories, biotechnology spheres or in any field where the controlled removal and controlling of droplets without physical contact could be of great use.

Lirette, Mobley and Zhang authored the paper for the December edition of Physical Review Applied, describing the discovery in “Ultrasonic Extraction and Manipulation of Droplets from a Liquid-Liquid Interface with Near-Field Acoustic Tweezers.”

“We were studying how sound can be used to exert forces, such as push and pull, on fluids,” Zhang said. “We wanted to see if a new lens, the fraxicon, could be used to do the job more efficiently than in the past. Robert first observed the droplet extraction and trapping in the course of this work.

“We have found that we can extract droplets whether the sound pulls on the surface or pushes it away. The trapping effect is stronger than the forces generated by the larger sound beam on the surface.”

The special shape of the sound beam is created by the fraxicon, a new type of acoustic lens. The fraxicon was first designed and built by Lirette, who at the time was an Ole Miss graduate student at NCPA. The work was part of Lirette’s dissertation project.

The design was touted in a 2019 The Journal of the Acoustical Society of America paper authored by Lirette and Mobley titled “Broadband Wave Packet Dynamics of Minimally Diffractive Ultrasonic Fields from Axicon and Stepped Fraxicon Lenses.”

The near-field acoustic tweezers technique works by forming sound waves into a specially shaped beam that creates a small pocket in the beam, which acts as a trap. Sending the sound beam into a fluid containing liquid components that do not mix allows the pocket to capture a droplet. 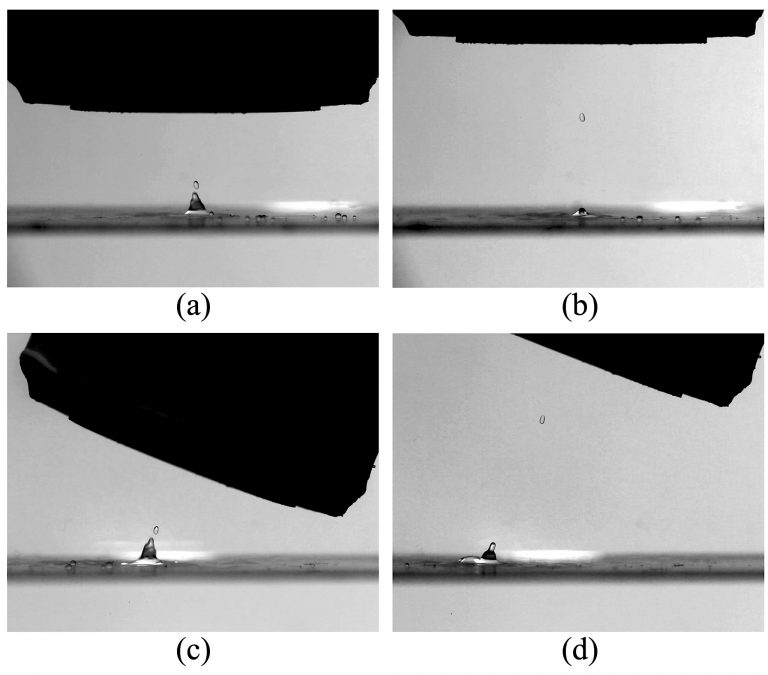 This sequence shows how researchers at the UM National Center for Physical Acoustics can capture and move a droplet using acoustic tweezers. The near-field acoustic tweezers technique works by forming sound waves into a specially shaped beam using a new type of acoustic lens, called a fraxicon, which creates a small pocket in the beam that acts as a trap. Submitted photo

Once the droplet is ensnared, the sound beam can be tilted or moved to maneuver the droplet, which remains the same size. With other types of tweezers that use sound or light, objects usually must be placed inside them to be held but can’t be picked up.

The initial discovery is just the tip of what the technique might be capable of performing.

“We want to try different types of lenses to optimize the effect so we can use less power yet enhance the extraction,” Lirette said. “We also want to broaden the scope of objects (where we can apply this technique). We are continuing to seek further applications of this technique for extraction and transport.”

The discovery continues the novel research into acoustics that the Department of Physics and Astronomy has been engaged in for more than 60 years, and adds to the stature of the NCPA, which started in 1986 and is one of the premier acoustics research centers in the U.S.

“The acoustic tweezer discoveries are the latest in a long tradition at NCPA of using a fundamental physics approach to develop useful technologies with a wide set of applications,” said Josh Gladden, UM vice chancellor for research and sponsored programs and former director of the NCPA.

“Many industries rely on fine manipulation of fluids, and this acoustic technique will provide a new tool enabling previously unrealizable processes and improved efficiencies.”