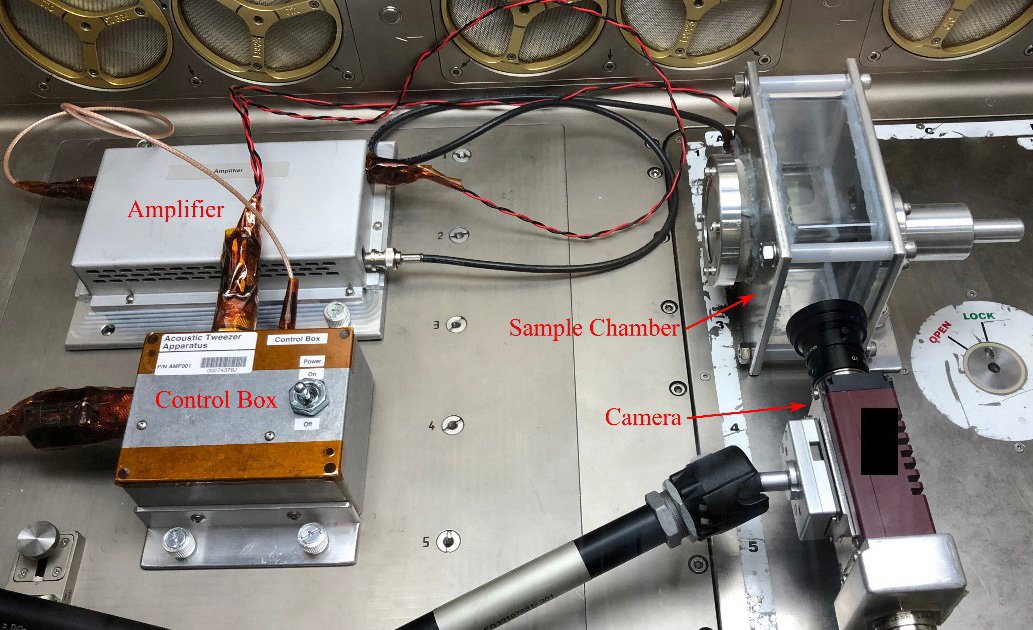 The original acoustic tweezers apparatus, built at the UM National Center for Physical Acoustics, was used to demonstrate the technique for controlling liquid droplets without physical contact. The technique was first achieved in spring 2019. Submitted photo

A device that can move liquids without physical contact sounds like the stuff of science fiction, so perhaps it’s appropriate that a prototype of just such a marvel is headed to the International Space Station for an out-of-this-world test of its capabilities.

When NASA’s next resupply mission to the ISS, Cygnus NG-17, blasts off Saturday morning (Feb. 19) from Wallops Flight Facility in Virginia, an acoustic tweezers device conceived and built at the University of Mississippi will be among its cargo.

Likun Zhang, assistant professor of physics and astronomy and a researcher at the university’s National Center for Physical Acoustics, and Robert Lirette, a former UM doctoral student in physics and postdoctoral research associate, hope to explore the ability of the device to control fluids in the zero-gravity environment of space. 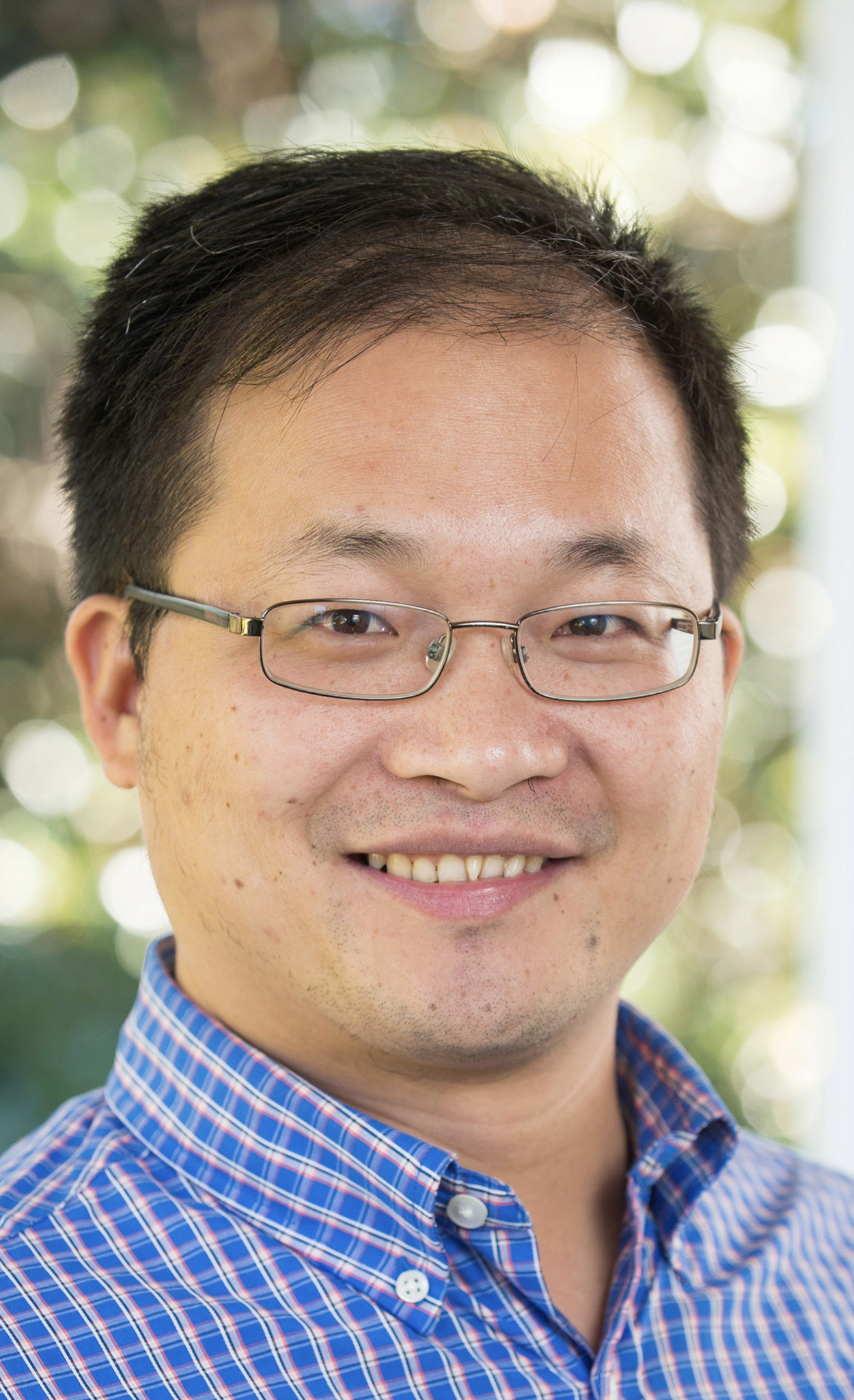 “NASA is interested in being able to manipulate fluids in space, and I think we can help with that,” Zhang said. “As you might imagine, fluids present problems in zero gravity, so a way of controlling them without physical contact would be a valuable thing on space flights.”

Being able to control liquids on a spacecraft or space station has applications for propulsion, power generation, temperature control and life support functions, he said. In zero gravity or microgravity, droplets can float freely in a spacecraft, posing danger to crew and equipment.

The acoustic tweezers technique works by forming sound waves into a specially shaped beam that creates a small pocket in the beam, which acts as a trap. Projecting the sound beam into a fluid containing liquid components that do not mix allows the pocket – the tweezers – to capture a droplet.

Once the droplet is captured, the sound beam can be tilted or moved to maneuver it.

Under the guidance of Zhang and Joel Mobley, Ole Miss professor of physics and astronomy and a senior scientist at NCPA, Lirette succeeded in capturing a droplet and moving it using only acoustic forces. That work was featured in the December 2019 edition of Physical Review Applied.

In a previous project funded by the NASA Established Program to Stimulate Competitive Research, or EPSCoR, Zhang and his team at NCPA investigated problems related to using structures of minimal contact to control fluids. The project followed up on previous research funded by NASA when Zhang was a graduate student at Washington State University.

“With all our prior works funded by NASA, together with the other experience built upon our recent success, the research is mature enough to design an experiment that can be safely flown on the ISS,” Zhang said. 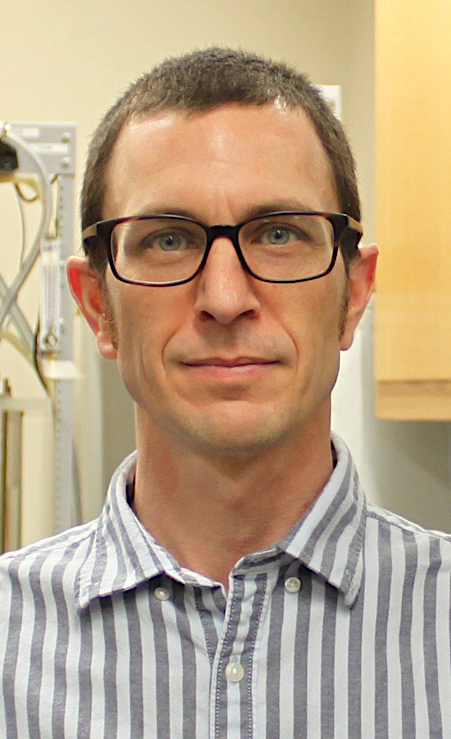 Zhang, the principal science investigator on the project, proposed to EPSCoR to send an acoustic tweezers experiment to the space station. The project was among only seven awarded during its funding cycle.

“The ISS is really the place to conduct an experiment without the constraints of Earth – to see the effects in zero gravity,” Zhang said. “This is a great opportunity to develop the ability for fluid control and guide further development of the technology.”

Preparing their experiment to head to space presented a host of technical challenges, said Lirette, who recently began a new job as a postdoctoral researcher with the National Institute of Standards and Technology at the University of Colorado at Boulder.

“We had a very tight deadline to get everything fabricated and certified for the flight,” he said. “There are a lot of weird things you have to pay attention to get an experiment in space, things that you might never think about in a lab here on Earth.”

For example, the equipment and all materials used in the experiment must be nonflammable. This meant that the wiring for the device’s electronics had to be wrapped in Teflon rather than the PVC commonly used for electrical wiring on Earth.

Also, all edges on the device had to be rounded to avoid crew members being injured on sharp corners and edges. And all the materials must be nonshatterable because fragments from a broken component could float around and pose a major problem on the ISS.

The transducer for the acoustic tweezers is a ceramic disc, which can shatter under extreme conditions. Lirette solved this problem by covering the transducer with thin steel wire mesh.

Much of the credit for building the device on schedule goes to Paul Dakin and Ronald Oswalt, the technical staff in the NCPA machine shop, Lirette said.

“The machine shop basically made everything on the chamber under my advice, and I did all the wiring, epoxying and filing of the corners,” he said. “The only thing that wasn’t built there was the amplifier.” 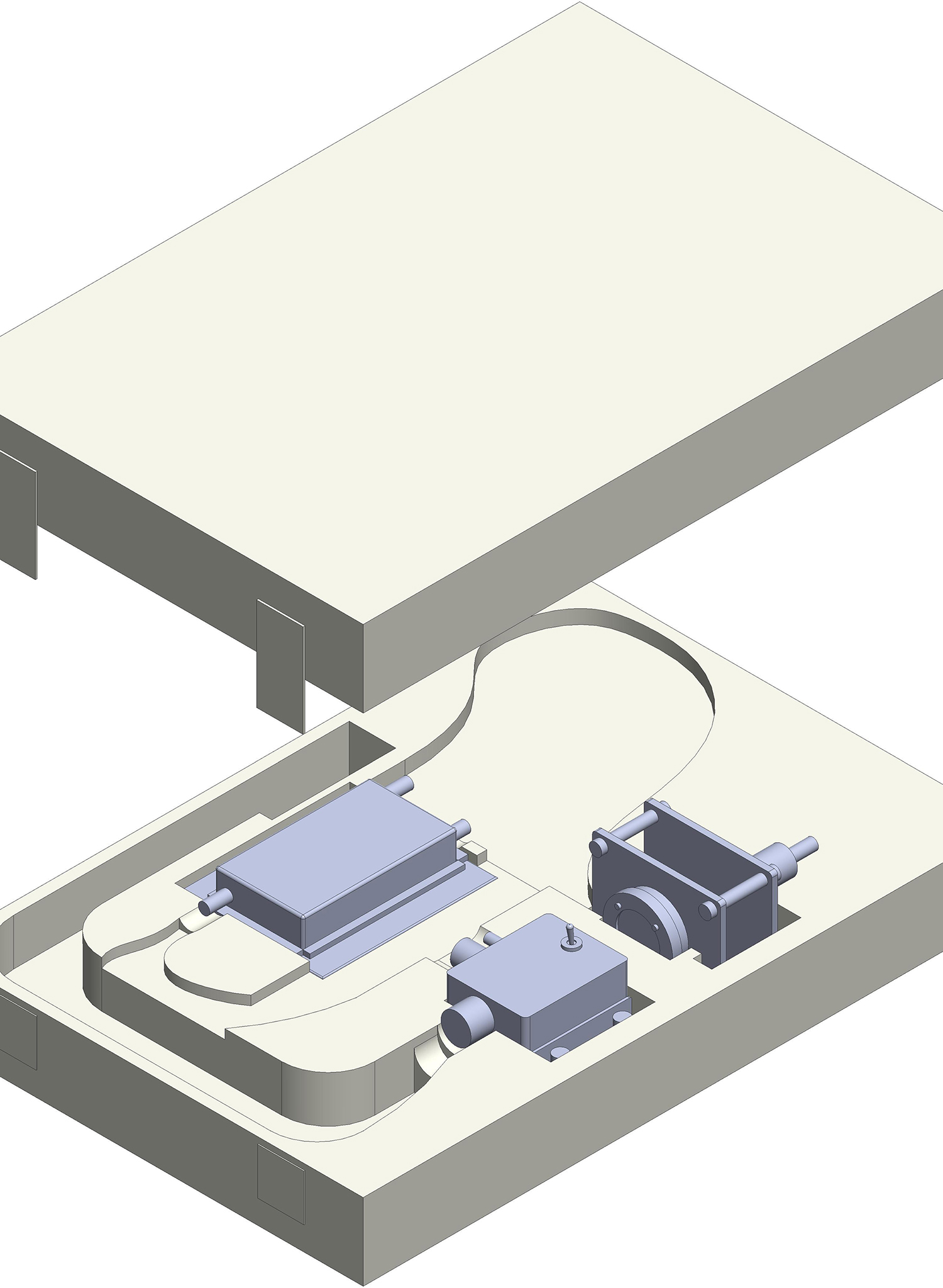 The acoustic tweezers experiment headed to the International Space Station includes three main components: a control box, an amplifier and a sample chamber. The crew member conducting the experiment will capture the results on high-definition video and share it with the researchers. Submitted artwork

Wayne Prather, a senior scientist at NCPA, also helped modify the original design of the sample chamber – where the droplets are produced and suspended – so that it could be fabricated by the machine shop.

“It’s very different working with NASA than it is to just do an experiment in the lab,” Prather said. “In the lab, you just make it happen, but one aspect he had to pay attention to in this case is that when they inject the droplets into the chamber, you can never have any expansion of the liquid so that it would squirt out. That would not be good in space.

“You have to incorporate some kind of expansion chamber to account for the increased volume, and I had some ideas that helped design a simple solution that worked pretty well for that.”

The experiment device, which includes a control box, an amplifier and the sample chamber, had to pass a host of certifications to be deemed flightworthy. For example, it had to be certified for resistance from electromagnetic interference.

“The first time, it actually failed the EMI certification, so I had to make some modifications and do it again,” Lirette said. “The only place we could complete the testing was in Cleveland, at NASA’s Glenn Research Center, so I took it there, and it passed the second try.”

The amplifier was custom-built by Electronics & Innovation Ltd., of Rochester, New York. When it failed the EMI testing, the company’s technicians modified it for free to pass the tests, he said.

The equipment also had to pass testing to confirm it would be able to withstand the vibrations of launch, and certified for human factor investigational tool criteria, which include checking labeling of components, testing fit of connectors and making sure all steps of the experiment are clear.

The experiment is slated to be conducted in April aboard the orbital laboratory.

A crew member will activate the experiment and use a syringe to inject a small amount of hexadecane, an oily, organic compound, into the sample chamber. High-definition video will capture the droplet’s motion as it is affected by the acoustic field.

The experiment will be repeated for five data collection runs before being stowed for return to Earth. Although the equipment may not return for some time, the researchers will have data to examine soon after the experiment runs.

“I’ll be on the phone with someone who has a direct link to the crew aboard the ISS when they run the tests,” Lirette said. “I’ll be able to answer questions and get feedback. 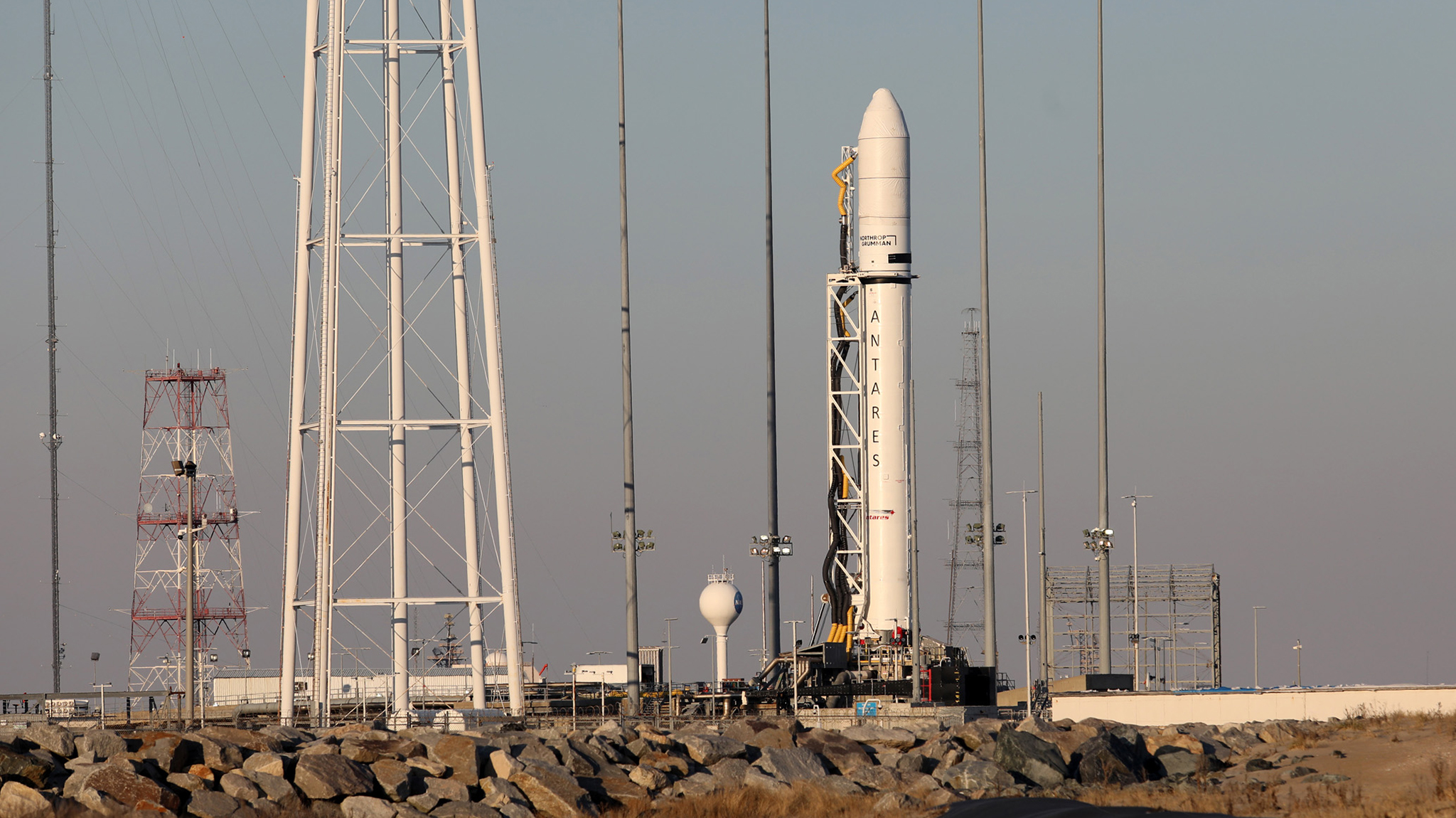 The Antares booster and Cygnus NG-17 supply spacecraft sit on the launch pad at the Wallops Flight Facility in Virginia. A UM experiment to control fluids in zero gravity is part of the cargo headed to the International Space Station this weekend. Photo by Thom Baur/Northrop Grumman

“The actual data is the high-def video that will be captured during the experiment. It will take about a day to download it to Earth, but we’ll be able to view it pretty quickly and make measurements of the droplets’ motion.”

Besides the practical applications for space travel, the experiment also will help researchers learn more about fluid dynamics in a zero-gravity environment, Zhang said.

“We want to see how the droplets move without the interference of gravity,” he explained. “This will tell us a lot about the fluid dynamics and the capability of the tweezers to manipulate fluids in zero gravity.

“This is a really good opportunity for us because you can work with larger droplets in space than you can on Earth.”

The work also will have applications on Earth, particularly for applications where fluids need to be controlled without physical contact, Lirette said.

“At Tulane University, for example, they have used this technique for precisely measuring coagulation of blood droplets,” he said. “They use the tweezers to suspend the droplet and oscillate it, and then they measure the coagulation without having to physically contain it.”

The EPSCoR funding is the latest affirmation of Zhang’s research, which began when he studied how to use acoustic forces to contain and move objects as a graduate student. He received the R. Bruce Lindsay Award from the Acoustical Society of America during its 180th meeting last summer, recognizing in part his research to help understand the interaction between fluid flows and acoustic fields.

“This is the third science experiment from the University of Mississippi that will fly on the ISS,” said Nathan Murray, an associate professor of chemical engineering, senior scientist for aeroacoustics at NCPA and director of the Mississippi NASA Space Grant Consortium.

“The funding from NASA EPSCoR supports the growth of NASA-relevant research capabilities in Mississippi, and this unique fluid control device is a great example.”

It represents a huge win not only for acoustics researchers at NCPA, but around the world, Lirette said.

The NCPA team is grateful for an opportunity to conduct research aboard the ISS, Zhang said.

“Fluid control techniques are relevant to NASA’s strategic research and technology development priorities in fluid management technologies,” he said. “Our development of fluid control using sound waves will open up a new flexibility for fluid control, particularly in a reduced gravity environment.”

The Cygnus NG-17 resupply mission is scheduled to lift off at 11:40 a.m. Saturday. To watch the launch, go to YouTube.