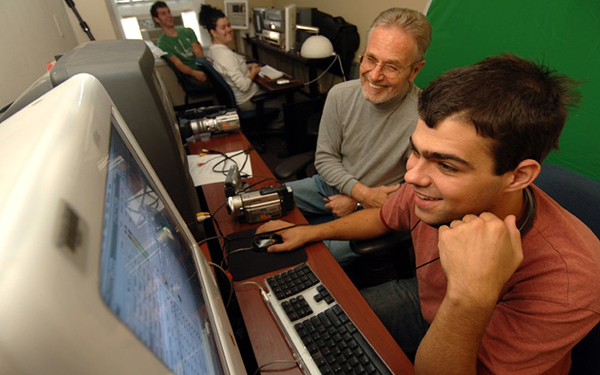 Jim Shollenberger, left, served as chair of the Department of Theatre Arts from 1984 to 2010.

Jim Shollenberger was unflinchingly honest with his criticisms, but was also a deeply caring mentor who loved his students and colleagues and was always committed to bringing out the best in them.

Shollenberger, 72, a Vietnam veteran and former professor and chair of the University of Mississippi Department of Theatre Arts, joined the UM faculty in 1977 and served as department chair from 1984 to 2010. He died of cancer Saturday (Jan. 30).

A celebration of his life is planned for 2 p.m. March 6 at the Powerhouse in Oxford. Waller Funeral Home, which is in charge of arrangements, will fly the U.S. Air Force flag to recognize his military service.

Wife Leah Shollenberger said her husband worked hard to raise the profile and reputation of the university’s theatre department during his tenure. His passion for the stage and his commitment to helping students succeed were obvious to anyone who knew him.

“He was very bright and very witty, but could say some stinging remarks about the performance the students were doing,” Leah Shollenberger said. “But he cared very deeply and wanted his students to learn everything he had to offer them.”

Leah Shollenberger met her husband 37 years ago when she was working as a dancer in a production. She taught theatre at Lafayette High School for more than 30 years.
Jim Shollenberger is survived by two daughters, Kristin Shollenberger Pheasant, of Manassas Park, Virginia, and Tia Shollenberger Mapes, of Ft. Lauderdale, Florida, who graduated with a degree from the UM theatre department and teaches high school theatre.

The couple’s very close and honest relationship was always present in their theatre-centric household.

Shollenberger was a native of Louisville, Kentucky. He served as a captain in the Air Force during the Vietnam War and later worked in theatre and television in California.

He was heavily involved in Theatre Oxford and the Oxford Film Festival. He also founded the Festival of Southern Theatre, which ran from 1984 to 1995.

Working with the Oxford-Lafayette Humane Society was another passion.

But he will best be remembered as a mentor and friend to many who passed through the UM theatre department.

Rene E. Pulliam, interim chair of the Department of Theatre Arts, remembers her former boss as someone who never flinched at doling out tough love to his students. Many saw him as a father figure, too, and they affectionately referred to him as “Shollen Daddy.”

“There was a lot of tough love and there was just a lot of love there overall,” Pulliam said. “He didn’t back off if they did something wrong. He wanted them to own up to it.”

He was also quick to offer sound advice to her. The first time she directed, she worked on “Joseph and the Amazing Technicolor Dreamcoat.” She told him it wasn’t working and wanted him to come watch a rehearsal. She fretted over the lack of transitions in the play.

“He looked at me and said, ‘There is no transition written in the play. There’s nothing you can do about it,’” she said. “I said, ‘Then am I going to write my own transitions.’”

Pulliam suspects she knows the root of Shollenberger’s keen observation skills. He served as a photographer and intelligence officer during the Vietnam War. He earned a Purple Heart after being wounded, but said very little about his service.

“I know he saw things in Vietnam through the lens of the camera,” Pulliam said. “He would sometimes let us know that seeing things through a camera somewhat softened it, but it was not pretty. It was horrifying. That dose of reality kept him, as a theater artist, grounded in the real world.”

Shollenberger was UM theatre professor Jennifer Mizenko’s first real boss. She was a young faculty member at the time, and Shollenberger became like a second father to her.

“Jim was a little gruff on the outside, but very caring and gentle on the inside,” Mizenko said.

She always wanted his approval on her dance productions. Her boss had been holding back when she would ask him what he thought. After seven years at the university, she created a modern adaptation of “The Nutcracker” called “Mixed Nuts.”

“After the show, he came to me and said, ‘Great job, kid,’” Mizenko said. “That was the first time I knew he liked my work. His approval was hard-earned, but when I received it, I knew he really meant it, and that meant the world to me.”

The last years of Jim Shollenberger’s life can only be described as a miracle. In 2010, he visited a nationally renowned medical center and was diagnosed with a fast-progressing form of liver cancer. He was given about four months to live, but he felt great and stubbornly refused to believe the diagnosis. He began to seek other opinions.

Dr. Thomas Glasgow, of Oxford, recommended the book “Cancer Free: Your Guide to Non-Toxic Healing” by Bill Henderson. Shollenberger followed the book’s advice and cut everything but organic foods from his diet and swore off red meat, opting for free-range chicken and wild-caught fish instead. He became an expert on vitamins and supplements and used an ionizer to keep his drinking water pure.

“He said cancer has to be managed, and unless I brought it up, he never seemed to think of cancer,” Leah Shollenberger said. “He lived his life fully every day. He said he wasn’t interested in trying to keep from dying; he was interested in living.”

He beat the odds for more than five years and felt well enough to travel the world with his bride. They went to Costa Rica, New Orleans, and visited the East Coast to see the fall foliage. They also traveled across Europe and the Mediterranean, among other places.

“He was a walking miracle,” Leah Shollenberger said. “If he hadn’t been stubborn and hardheaded, if he hadn’t had that kind of temperament, he would have died immediately.”