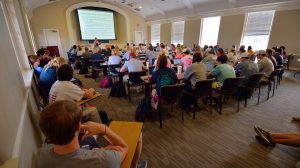 Four faculty members within the College of Liberal Arts at the University of Mississippi have been promoted to administrative positions, and more than 50 faculty members across campus have been granted tenure or rank promotions.

“I am pleased to announce the outstanding faculty that will assume these very important administrative roles within the College of Liberal Arts,” Dean Lee M. Cohen said. “I am confident that each of these units will flourish under their new leadership and I am excited to begin working with them.

“I would also like to thank those individuals who these individuals are following – all of whom served their respective units with exceptional leadership and resourcefulness.”

Though new to the university, Roman comes with both short- and long-term goals for the Department of Biology, which includes growing its faculty and increasing the number of high-impact research projects in diverse areas of the life sciences.

“Our team will accomplish this goal through a multipronged approach that includes improving our ability to conduct state-of-the-art research with new shared-use instrumentation facilities Roman,” said. “We are increasing our efforts at recruiting and retaining academically excellent, driven and curious graduate students. We will also increase the level of discourse with discipline specific journal club courses, a bolstered research seminar series and a departmental retreat.

These increases in research communication will help generate more innovation and provide both incentives and tools for even higher levels of multidisciplinary research, he said.

“By encouraging our faculty to work together in these tasks, we will elevate our research and develop national and international recognition for the areas of strength present in the biology department,” he said.

A member of the Department of Physics and Astronomy faculty since 1996, Bombelli said he is fortunate to have stepped into the position at a time when the department has seen an increase in the number of regular, tenure-track faculty members.

“This has strengthened our already very active and prominent research groups, and put us in a position to attract even higher levels of funding,” he said. “We are a relatively small, friendly department, in which faculty carry out very exciting research, and we plan to use this to raise the quality and diversity of our applicant pool, in both our undergraduate and graduate programs.”

In terms of course offerings, the recent increase in faculty size has been offset by the number of sections needed to teach to serve a much larger overall student population.

“So my goal is to increase the size of the faculty further, to reach a level at which we can teach a really attractive variety of courses,” Bombelli said. “In the short term, this will require the development of a clear vision and expansion plan.”

Before coming to UM, Smith was professor and chair of psychology at the University of Texas at San Antonio.

“My goals are to provide leadership for growth in the department within the environment of UM as a leading research university by supporting faculty and students and through creative problem solving,” she said. “I am fortunate to have a strong positive foundation to build on, thanks to the work of Dr. Michael Allen, who served as department chair for 14 years and who continues to provide invaluable advice during the transition in leadership.”

“The department will work to ensure that our students have the resources to create wonderful pieces of theater, film and dance,” Barnett said. “They will learn about the artistry, professionalism and critical thinking necessary to generate substantive pieces of work and discover the ways in which they can make a positive difference in our community through the representation of our regional, national and global stories.”

Through collaboration with the other fine arts departments, the Department of Theatre Arts will serve as a cultural corridor through which the community is able to connect with the university, he added.

Dinius, who has been a UM faculty member since 2004, said his first and foremost goal is to make sure that the international studies major remains a program that stands for academic excellence as the number of students continues to grow.

“The Croft Institute now accepts 50 percent more students than it did in 2010, but its faculty has not grown, which means that we have to use our resources very wisely to give students the true ‘Croft’ experience and inspire them to perform at the highest level,” Dinius said.

“Over the next few years, I would like to reshape the curriculum in the international studies major to be more global in outlook, building on our strength in the study of four particular regions – East Asia, Europe, Latin America and the Middle East – and finding ways to think beyond those regions.”

Another priority of Dinius’ would be to place even greater emphasis on undergraduate research, a skillset that has proven to lead to exciting careers for alumni, often in areas of the private sector that one might not immediately associate with research.

“In terms of Croft’s contribution to the university at large, I want to see us even more engaged in the internationalization of our campus,” he said. “This would include expanding the number of international events working with other units on campus, such as the Honors College, the Department of Modern Languages and the Office of Global Engagement, among others.

“Greater internationalization of campus benefits our majors, the student body at large and the Oxford community.”

Harker joined the faculty in 2003 and has been an assistant professor and associate professor of English. She was director of undergraduate studies in English, the department’s assistant chair and interim director of the Isom Center in 2014-2015.

“Our short-term goals include increasing the availability of courses in gender studies to serve the student body, creating partnerships with groups on campus and in the community regarding gender and sexual studies, and building financial support for programming and education,” she said. “We will build on partnerships with the Oxford Film Festival, the Powerhouse, the Center for Inclusion and Cross-Cultural Engagement, and many others within and outside of the university.”

Harker said her long-term goals are to extend the reach of the center’s educational programs through podcasts, social media and online programming, move to more accessible and visible space in Lamar Hall, and build a stronger endowment to support its educational mission.

Other faculty members earning tenure and/or rank promotions are: