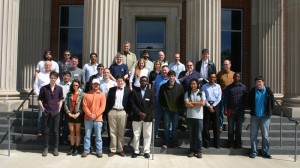 Members of the University of Mississippi Society of Physics

The University of Mississippi chapter of the Society of Physics Students has received an honorable mention from the organization’s national council.

The designation as an Outstanding SPS Chapter, or as a Distinguished SPS Chapter, is based on an assessment of the depth and breadth of activities conducted by the local group and presented in a report. Criteria include physics research, public science outreach, physics tutoring programs, hosting and representation at physics meetings, providing social interaction for chapter members and participation in regional and national meetings.

“Each year, approximately 10 percent of all SPS chapters earn the outstanding recognition,” said Toni Sauncy, SPS national director. “Based on the activity and level of student engagement presented in the UM chapter’s report, we can easily say it is among the top 20 percent of all 772 SPS chapters.”

Breese Quinn, professor of physics and the UM chapter’s faculty adviser, said he is pleased by the national recognition.

“Receiving the designation of Distinguished SPS Chapter is quite an honor for the Ole Miss chapter of SPS,” said Quinn, whose one-minute video bested dozens of others made by his peers in Symmetry magazine’s communication-outreach project last fall. “In particular, it recognizes the great success our students had last year leading our region by hosting the SPS Zone 10 annual meeting.“In the coming year, we hope to take the next step to Outstanding SPS Chapter by increasing our involvement at the national level in addition to our strong work regionally in scholarship, fellowship and service.”

Quinn said the Symmetry contest made him take a step back and look at the big picture to put into words what makes him so passionate about particle physics. “It’s the excitement of learning something new about the world that nobody’s ever known before.”

Last year, Quinn’s photo and brief bio on the nature of his research appeared on the Faces and Places of Great Science and Innovation in the U.S. poster, which was displayed at the National User Facility Organization Science Exhibition, hosted by U.S. Rep. Alan Nunnelee (R-Miss.) in his Science and National Lab Caucus in Washington, D.C.

Quinn has been involved in research at the U.S. Department of Energy’s Fermilab for more than 20 years, since he was a graduate student at the University of Chicago. Recently, his University of Mississippi group was part of the analysis team that reported the first evidence for the Higgs particle. One of the first recipients of Fermilab’s new Intensity Frontier Fellowship, Quinn was on sabbatical from the university last semester, helping design a new Fermilab experiment that should help elucidate the matter-antimatter asymmetry in the universe.