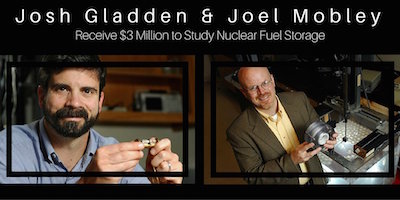 The United States has thousands of tons of used nuclear fuel stored in aging steel casks, raising serious safety concerns about the long-term stability of the radioactive material, but two University of Mississippi physicists are leading a team to study the stability of the canisters.

The U.S. Department of Energy has awarded $3 million to fund the research for three years. Other institutions participating in the work include the universities of Florida and South Carolina, Oregon State University and industry partners.

“At present, there are about 70,000 tons of spent nuclear fuel in storage, and it is increasing at a rate of nearly 2,000 tons per year,” Gladden said. “These storage casks are massive steel structures, each of which can hold several tons of fuel.”

The casks are also completely sealed.

“With no internal access, it is critical to find ways of evaluating the state of the spent fuel rods and support structures from the outside,” Mobley said. “The NCPA team will investigate acoustic and ultrasonic approaches to the problem. The external partners will apply other means, including exotic modalities, such as muon tomography.”

NCPA has been working on structural health monitoring in difficult applications for several years. Because of NCPA’s expertise, James Tulenko, nuclear engineering professor at UF, contacted the center about leading a team to address how to determine the health of internal support structures and fuel rod assemblies in spent nuclear fuel rod dry-storage casks.

The proposal was submitted to the DOE through the Nuclear Energy University Program, or NEUP.

“As the lead institution, our work involves computer modeling and hands-on experimental work,” Mobley said. “We’ll build a virtual model of the loaded storage cask, and use computer models to test the various acoustic approaches in order to optimize the placements of our sources and sensors.

“This will serve as a means to evaluate and optimize our techniques and will provide a feedback loop for the experimental tests.” 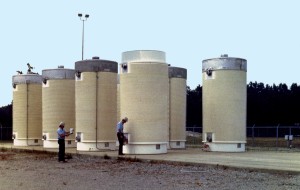 Spent nuclear fuel is kept in these casks, which are being studied by UM researchers for future safety and transportation. Photo courtesy of NRC

Researchers at NCPA and the UM Department of Physics and Astronomy also plan to build a scale model of a storage cask, which will be used to test and develop the hardware and methods to evaluate the aging casks. Then researchers will go on-site at a storage facility to evaluate the effectiveness of their technique on an actual cask.

“Nuclear energy must be an essential component in the world’s energy infrastructure if we hope to reduce the production of greenhouse gases,” Gladden said. “As a nation, we must deal with the long-term management of our spent nuclear fuel. This project is concerned with making sure that the fuel is safely stored and transportable.”

Using steel casks to store spent nuclear fuel rods was implemented about 25 years ago as a temporary solution to high-level nuclear waste until a permanent storage solution emerged. At the time, underground facilities, such as Yucca Mountain, were expected to become available as permanent storage sites, but those projects have stalled.

“Since quite a few of these casks are nearing the end of their engineered lifetime, the inspection requirement must be fulfilled in the next five years or so,” Gladden said. “These types of requirements are regulated by the U.S. Nuclear Regulatory Commission.

“Currently, there are no tools or techniques to assess the structural integrity of the interior or the rod bundles. This research has the potential to provide those tools.”

At some point, plans call for the casks to be transported by rail or barge to a permanent storage facility.

“These tools will be used to perform pre- and post-transportation testing to assess any damage incurred during the trip,” Mobley said.

DOE officials have great expectations of success from the scientists’ efforts, said John Gilligan, director of NEUP in the DOE Integration Office.

“The project led by Josh Gladden is one of the larger and most important as part of our NEUP program to support commercial nuclear energy in the U.S.,” Gilligan said. “The DOE will take the analysis and conceptual designs proposed by UM and perhaps eventually build operating prototype experiments to test the ideas and pass the information on to industry for implementation.

“One of these new techniques might become standard practice to ensure the integrity of spent fuel storage in the U.S.”

For more about the NEUP, visit http://neup.gov/. For more information on research programs at NCPA, go to https://ncpa.olemiss.edu/.