UM Physicist to Explain Hows and Whys of Higgs Discovery April 5 at 5:30pm

Physicists around the world were ecstatic recently when an international team of scientists announced that they are more confident than ever that a “Higgs-like” particle discovered last summer is indeed the long-sought Higgs boson, an incredibly tiny particle that is crucial to understanding all matter in the universe.Among those sharing in the excitement are Breese Quinn, a University of Mississippi associate professor of physics, and his colleagues in the university’s High Energy Physics group. Quinn plans to share some of that excitement in a free public presentation next month on campus. 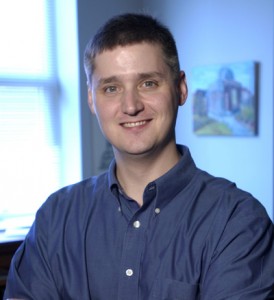 “The Higgs Particle: Who, What, Where, When, How and Why?” is set for 5:30 p.m. April 5 in the Centennial Auditorium of the Thad Cochran Research Center. Besides explaining what the Higgs boson is and why the discovery matters, Quinn also plans to explain how UM physicists contributed to the massive project.

“While we at Ole Miss were not the lead researchers on the discovery, all of us in the HEP group are closely connected with it,” he said. ”Using an analogy to the Apollo program, none of us are Neil Armstrong, but some of us are part of the Saturn V rocket design team, and some of us are something like (Mercury and Gemini astronaut) Gordon Cooper.”

UM physicists and technicians helped build experimental components of the Large Hadron Collider, the giant particle accelerator at CERN in Switzerland where the Higgs data was collected. Those components include the hadron calorimeter, which measures the energy released in violent subatomic collisions, and a pixel-tracking detector able to determine the precise origin of particles in the interaction, down to 30 micrometers.

Quinn’s presentation is in conjunction with a joint meeting of the Society of Physics Students Zone 10, the Mississippi Association of Physicists and the Mid-South Acoustical Society, which is set for April 5-6 on campus. Rather than a standard lecture, Quinn is planning an engaging presentation with visual aids and maybe even a demonstration or two to help lay audiences understand the significance of the discovery.

“Why does the Higgs discovery matter?” he said. “If you’ve ever had an MRI or surfed the Web, it matters. Or if you think discovering the very fabric of the universe and knowing where to look for the next secrets the universe has in store are important, it matters. All of those things and more have come directly from high-energy physics and the search for the Higgs.”

Quinn, who joined the UM faculty in 2004, earned his bachelor’s degree in physics from Mississippi State University and completed his master’s and doctoral degrees, both in physics, at the University of Chicago.

For more information on Quinn’s lecture, or for assistance related to a disability, call the Department of Physics and Astronomy at 662-915-7046.