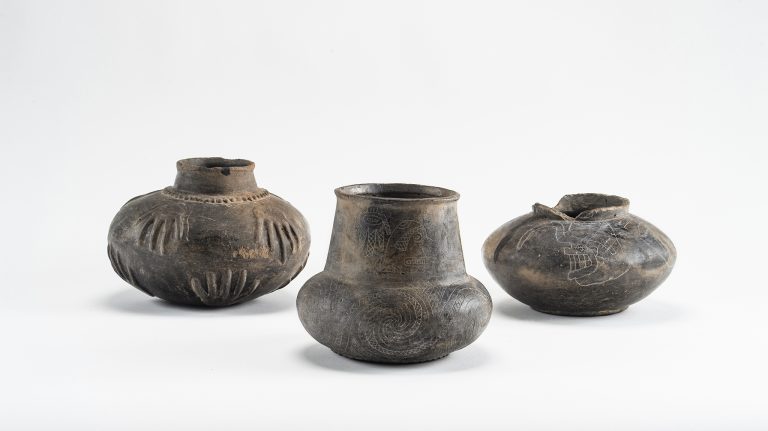 These ceramic objects from UM’s Davies collection, dating back to 1400, were used by Native Americans in the Mississippi Valley. The objects are on display at The Historic New Orleans Collection. Photo by Robert Jordan/Ole Miss Communications

The University of Mississippi’s Department of Sociology and Anthropology has loaned six ceramic vessels from its collection to The Historic New Orleans Collection for an exhibit about this region of the country.

This is the first time the department has loaned these objects for display by a non-university entity. Each artifact is part of the “New Orleans, the Founding Era” exhibit, which celebrates the 300th anniversary of the founding of the city beginning with Native American groups of the area through European arrival and the forced migration of enslaved people.

The native objects loaned by the university are from the Walls site in northwest Mississippi and date back to around the year 1200. Other items in the exhibit come from museums in Spain, France and Canada as well as from other U.S. institutions, including the Peabody Museum at Harvard University.

“We are very excited to be part of The Historic New Orleans Collection’s exhibit on display in the French Quarter,” said Robbie Ethridge, professor of anthropology. “We hope this will allow our collection to gain some exposure to generate interest and let people know what we have here at the university.”

Ethridge was instrumental in allowing these objects to be on display at THNOC. She was initially contacted to write descriptions of several artifacts already in the exhibit and suggested THNOC also exhibit these pots, which were most likely used as part of rituals and religion for Native Americans.

“This exhibition offers visitors an opportunity to reflect on the complicated and often messy nature of New Orleans’s birth and early years,” said Erin M. Greenwald, historian and exhibition curator. “It examines the lived experiences of the settlement’s earliest inhabitants, a majority of whom – including French and Canadian soldiers, French convicts and enslaved Africans – were unwilling participants in France’s colonization of the lower Mississippi Valley.” 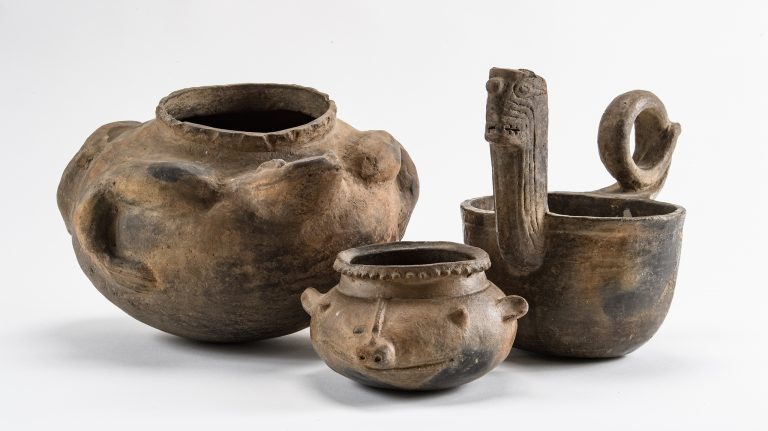 These ceramic effigy vessels are on loan to The Historic New Orleans Collection by UM’s Department of Sociology and Anthropology. The vessels are on display through the end of May. Photo by Robert Jordan/Ole Miss Communications

The Center for Archaeological Research at UM houses an extensive collection of 1,300 boxes filled with objects from more than 500 sites, many of which are Native American. The collection also includes Inuit artifacts, baskets and beadwork from Native Americans in the Southwest and military objects from the Civil War and World War I, among other items.

“It is exciting for the Department of Sociology and Anthropology and the Center for Archaeological Research to share these incredible resources with a wider audience,” said Maureen Meyers, assistant professor of anthropology. “We hope it spurs more interest in Mississippi’s native past and present communities and is the first of many more exhibits of our collection.”

For more information about the exhibit, visit https://www.hnoc.org/exhibitions/new-orleans-founding-era.