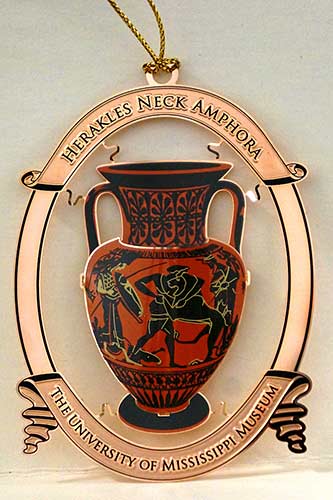 For the 15th year, the University of Mississippi Museum is offering a new keepsake ornament for the holidays. This year’s design features an ancient Greek neck amphora, c. 510-500 B.C., from the David M. Robinson Collection of Greek and Roman Antiquities.

On this amphora, the hero Herakles, known as Hercules to the Romans, is shown completing the first of his 12 labors, which was to defeat the invulnerable lion that was terrorizing the hills of Nemea in Greece. 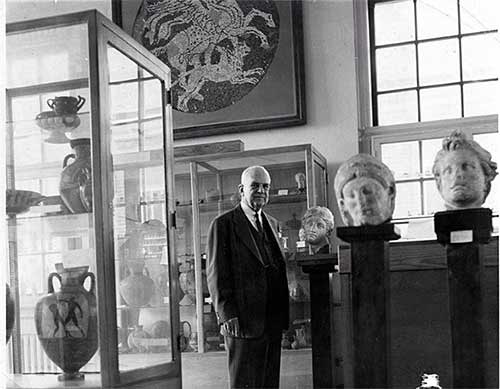 David Moore Robinson, classics professor from 1947–1958 and generous donor of his collection of Greek and Roman antiquities to UM.

This vase is among more than 2,000 artifacts in the University Museum Greek and Roman Antiquities Collection. It was formerly in the private collection of David M. Robinson, who taught in the UM Department of Classics after retiring from Johns Hopkins University in 1947. The amphora was later purchased from his widow by Mr. and Mrs. Frank S. Peddle Jr. and donated to the university.

“Although the artifacts are internationally known to scholars and continuously studied today, there are many Ole Miss faculty, students and alumni that are not aware of these signature university cultural treasures,” said Robert Saarnio, University Museum director.

“This particular vase was chosen to represent the collection because it depicts Greece’s most famous Greek mythological hero, Herakles. Ornament sales from our Museum Shop provide the museum with significantly meaningful financial support, for which we are very grateful.”

The Herakles Neck Amphora commemorative ornament is available for $25, plus tax.

Keepsake ornaments can be purchased in the museum store or by calling 662-915-7073. Orders to be shipped must be placed by Dec. 11 and require a $7 shipping and handling fee.

Museum members and Friends of the Museum receive a 10 percent discount on all merchandise in the museum store.

The University Museum is at the intersection of University Avenue and Fifth Street. Holiday hours for the Museum Shop are 8 a.m.-6 p.m. Monday through Saturday.

Museum visiting hours will remain the same, 10 a.m.-6 p.m. Tuesdays through Saturdays. For information about events and exhibits, visit http://museum.olemiss.edu or call 662-915-7073.