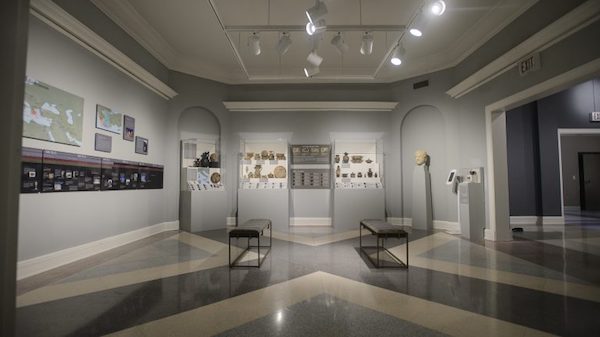 The University Museum has reopened the Buie West Gallery, which houses artifacts from the David M. Robinson Greek and Roman Antiquities Collection that dates back to 2500 B.C. Photo by Marlee Crawford/Ole Miss Communications

The University of Mississippi Museum has reopened the first of four galleries in its Mary Buie wing, which is undergoing reinstallation to house the David M. Robinson Memorial Collection of Greek and Roman antiquities.

The original Mary Buie Museum, which became a connecting wing upon the opening of the current museum building in 1977, has been vacant for nearly eight years. The reopened Buie West Gallery serves as an introduction to the ancient Mediterranean world.

“The University Museum is exceptionally proud to launch this spring the first of a succession of openings of the galleries of our original 1939 Mary Buie building, now dedicated not only to a reinstallation of these internationally-renowned antiquities collections, but to their reinterpretation – telling their stories in freshly reimagined ways, under the exceptional leadership of collections manager Melanie Munns,” said Robert Saarnio, museum director.

“This is a signature moment in the museum’s 78-year history, greatly augmenting access to these stunning artifacts and transforming the museum’s national profile in the process.”

The gallery contains artifacts not previously on display from Egypt and the Near East, and from ancient Europe. Another section features pottery arranged chronologically from the Bronze Age to the Hellenistic period. A large timeline and multiple maps aid in providing historical and geographical context.

“They give viewers a visual timeline of pottery shape, painting and motifs,” antiquities collections manager Melanie Munns said. “My goal as curator and designer was to use a hierarchy of text and incorporated imagery to increase context and discovery.”

The gallery is open to the public and an opening reception will be held from 6 to 8 p.m. Tuesday (March 27) as part of the Oxford Art Crawl.

The museum’s antiquities collection at the museum is widely regarded as the finest in the South and one of the best in the country. Most of the collection, containing more than 2,000 artifacts dating from 2500 B.C. to 500 A.D., was part of the personal collection of university professor David M. Robinson.

Because of space constraints, less than 10 percent of the collection is on display. Once the reinstallation is complete in all four galleries, much more of the collection will be accessible to the public, and the variety of objects will paint a better picture of the ancient lives of Mediterranean people.

This project has been ongoing for several years. This portion of the museum was closed in 2010 for renovation and structural repairs. In 2012, the museum received a donation from Marjorie Peddle and family to begin a reinstallation of the collection in those galleries.

Munns has been overseeing the project since 2013.

“Initially we planned an overall theme as a staff with the classics department,” she said.

“At the time, we felt we had the inability to fabricate casework or design elements on our own, so at the beginning of this project we focused heavily on fund- and friend-raising.”

In 2016, the Friends of the Museum allocated some of the funds raised at its annual Harvest Supper to the reinstallation project. With this gift, the museum was able to move from the planning phase to the fabrication phase, even though the overall funding goal had not been reached.

“We decided to open each gallery in phases as funding permitted,” Munns said.

The museum hired preparator Taylor Kite, who began to fabricate standard museum cases, in the fall of 2016.

“His hiring allowed me to make some changes to my approach in design and curation, no longer having the same limitations of prefabrication and standard sizing,” Munns said. “I also was able to find local and affordable options for additional display needs.”

The next step for the museum is to make progress on the second gallery in the Mary Buie building, which is expected to hold 17 custom-made cases of artifacts.

The museum continues to seek resources to complete the reinstallation project. To support the project, click here. Individuals and organizations also can send checks with the fund noted in the memo line to the University of Mississippi Foundation, 406 University Ave., Oxford, MS 38655; or by contacting Angela Barlow Brown at 662-915-3181 or ambarlow@olemiss.edu.