Nano-reinforced materials to be tested aboard the International Space Station 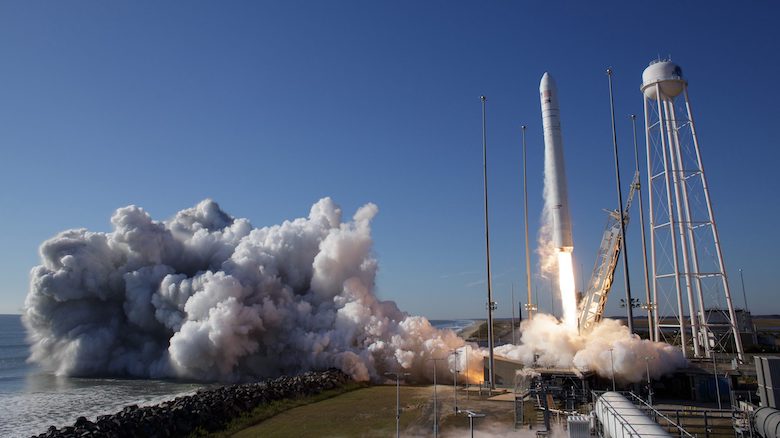 New nano-reinforced materials created at the University of Mississippi left the Earth Saturday morning (Nov. 2) on a journey to the International Space Station.

The innovative research materials were part of a payload that blasted off from NASA’s Wallops Flight Facility in Virginia. The materials will spend a year orbiting the globe attached to the outside of the International Space Station, where they will be tested for their effectiveness to improve future spaceflight.

The two materials are a graphene-enhanced polymer and a nanostructured hybrid polymer. Graphene is a 2D form of carbon discovered in 2004 that has shown versatility and the potential to stimulate technological advancement in many industries.

“This unique opportunity will enable us to evaluate the effectiveness of a new class of materials designed and manufactured at the Center for Graphene Research and Innovation on the UM campus,” said Ahmed Al-Ostaz, the center’s director and the university’s Brevard Family Chair in Civil Engineering. Al-Ostaz serves as the project’s co-principal investigator along with civil engineering professor Alexander Cheng.

“Mississippi is leading the way in graphene research, which has the potential to benefit nearly every major sector of our economy,” said U.S. Sen. Roger Wicker, who is a strong advocate for graphene research at Ole Miss. “This experiment will yield valuable insights into the utility of this material and is a testament to the caliber of work being done by the talented scientists at the University of Mississippi’s Center for Graphene Research and Innovation.”

The research is made possible through an International Space Station Flight Opportunity Award received in 2017, the second such award active at the university. Patrick Curtis, an associate professor of biology, will send bacteria grown in his Ole Miss laboratory to the space station in the coming years as part of his Flight Opportunity Award.

“There isn’t much more exciting, or nerve-wracking, than to spend a year on an experiment and watch it get launched into space,” said Josh Gladden, UM vice chancellor for research and sponsored programs.

“This is a unique and thrilling opportunity for the students and faculty involved in this project – many of whom traveled to Virginia for the launch. UM is proud to have been selected for this test on the ISS and excited about contributing to the protection of both future astronauts and space systems.”

Nanomaterials are characterized by their microscopic size, which is measured in nanometers, a measurement about 100,000 times smaller than the diameter of a human hair. The materials are growing in popularity, finding uses in electronics, medicine, clothing, construction materials and more.

The UM-manufactured materials are constructed into 34 thin films that will be mounted on the exterior of ISS for one year. The two materials are being tested for impact protection, and the ultra-lightweight, nanocomposite sheets’ exposure to space will determine if they can be a significant improvement in the shock absorption of future spacecraft, Al-Ostaz said.

“If so, these new shields could be retrofitted on ISS and also used on spacecraft destined for planetary missions,” he said.

The testing aboard the ISS is the second phase of the project, with the first phase being ground testing of the materials completed at NASA’s Marshall Space Flight Center in Huntsville, Alabama.

The Cygnus spacecraft attached to the ISS early Monday morning (Nov. 4), and the space station’s crew soon will begin to unload the more than four tons of experiments, supplies and hardware.

The UM-manufactured materials will be installed aboard the Materials International Space Station Experiment, or MISSE, an orbiting commercial science facility permanently installed on the exterior of the space station. Alpha Space owns the testing platform that endures “extreme levels of solar- and charged-particle radiation, atomic oxygen, hard vacuum and temperature extremes.”

After their year in space, the specimens will be returned to UM for post-test evaluation, including investigating changes in the physical, chemical and mechanical properties of the films.

“The future application of this work would highly align with NASA’s needs for radiation and impact shielding,” Al-Ostaz said. “As a follow-up of this project, two students from UM will spend two weeks in France in mid-November to participate in a zero-gravity experiment as part of a collaboration with the European Space Agency.”

The Flight Opportunity Award is granted through NASA’s Established Program to Stimulate Competitive Research, or EPSCoR. According to NASA, the EPSCoR objectives include contributing to and promoting the development of research infrastructure in areas of strategic importance to the NASA mission and contributing to overall research infrastructure, science and technology capabilities, higher education and/or economic development.

Funded for $100,000 through NASA Award No. 80NSSC17M0038, the nanomaterial project is titled “Utilizing ISS as a Test Bed to Validate the Performance of Nano-Enhanced Polymers Subjected to Atomic Oxygen and/or Hypervelocity Impact.”

“It is a great honor that our research has been selected and sponsored by NASA,” Al-Ostaz said.