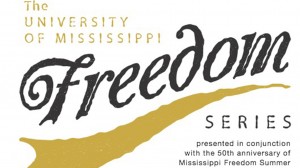 Scheduled events include the UM Gospel Choir‘s 40th anniversary concert Nov. 15 and an Oxford Civic Chorus concert Nov. 17. Both concerts begin at 7:30 p.m. in the Gertrude C. Ford Center for the Performing Arts. Adult admission is $10 each night, with a special $5 admission for students the second night only.

The Burns-Belfry Museum and Multicultural Center, 710 East Jackson Ave., will be open to visitors from 2 to 5 p.m. Nov. 16. A screening of the documentary “Freedom Summer” begins at 7 p.m. Nov. 18 at the Oxford Studio Cinema on Jackson Avenue. Both events are free to the public.

“For years, the events of Freedom Summer evaded the history books, and several generations of Mississippians are unaware of the details surrounding the events,” said Donald Cole, assistant provost, assistant to the chancellor for multicultural affairs, associate professor of mathematics, and program co-coordinator.

“If you are one of the individuals who missed this part of your state’s history, or were told only portions of it or if you want to hear from individuals who actually experienced it, then you will want to attend the events planned for Freedom Summer. Even if you’re not a historian, you’ll enjoy the music, folklore and academic lectures associated with this event.”

“Dr. McLin, who grew up with Martin Luther King Jr. in Atlanta, wrote this piece to honor the memory of her friend,” said Brooke Worthy, civic chorus director. “This is a great opportunity to hear an important piece that is rarely performed in the United States. In addition, the concert on Monday night brings together some wonderful ensembles in one venue.”

Presented by UM Libraries, the nationally-acclaimed documentary “Freedom Summer” focuses on the memorable 10 weeks in 1964 when more than 700 student volunteers from around the country joined organizers and local African-Americans in an effort to shatter the foundations of white supremacy in the South. “Freedom Summer” is part of the Created Equal film series that chronicles the legacy of the long civil rights movement.