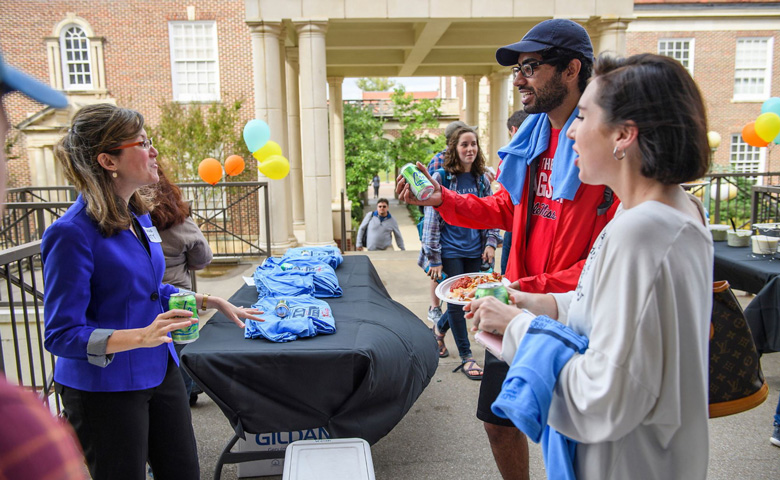 Anne Twitty (left), associate professor of history, greets students during the Department of History’s undergraduate open house outside of Bishop Hall on the Oxford campus.

A $150,000 gift to the University of Mississippi’s Arch Dalrymple III Department of History has better positioned the department to embrace long-range opportunities, such as supporting faculty with their research and teaching goals.

“These help raise the profile of the department nationally while also serving the state of Mississippi and our surrounding community,” she said. “Gifts of this size, particularly to use at the department’s discretion, are rare but hold truly transformative potential to move forward a department’s research and teaching priorities.”

The gift was bequeathed to the university by the late Brig. Gen. John H. Napier III, a 1949 UM history graduate.

“I think he hoped the History Department could use that money to pursue the appreciation of history and research,” said Cameron Freeman Napier, the donor’s wife, who maintains their home in Ramer, Alabama. “But the main thing is to advance the interests of students in the field of history.

“People don’t seem to study history that much and there’s a prevalence of presentism — whereby present-day thinking is imposed upon the past, rather than understanding the past and learning from it,” she continued. “Young people think, ‘Oh, what did the past have to do with me?’ Well it has everything to do with them. The main point is that you learn from it.”

In 1989, a previous gift from Napier to the university established a scholarship to help support students from Pearl River County and surrounding counties in Mississippi.

Napier retired from the U.S. Air Force in 1977 as a lieutenant colonel and worked in intelligence and special operations. He served in Vietnam as an expert in unconventional warfare and in national security at the Pentagon, and completed his career at Maxwell Air Force Base in Alabama. After retirement from active duty, he joined the Alabama State Defense Force in 1991 and retired as a state brigadier general in 1997.

As an Ole Miss student, Napier was a Taylor Medalist and was active in Sigma Chi fraternity, Air Force ROTC, and on the student newspaper and yearbook staffs.

“We are thrilled by the opportunities these monies will provide to expand the range of projects both our faculty and students can embrace,” Wilson said. “I personally find this scale of contribution not only generous but also visionary as the Napier family could imagine the multiple ways in which private giving can change the course of individuals’ lives.”

Gifts can be made to the Brig. Gen. John H. Napier III Dalrymple Department of History Endowment by sending a check to the University of Mississippi Foundation, with the fund’s name noted on the memo line, to 406 University Ave., Oxford, Mississippi 38655 or by giving online at give.olemiss.edu.

For information on including UM in estate plans, contact Dan Wiseman, senior director of gift planning, at 662-915-5944 or daniel@olemiss.edu.