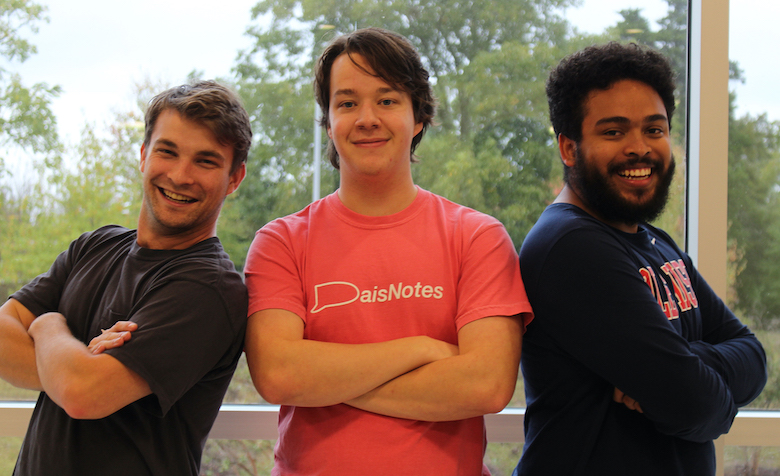 Recent University of Mississippi graduates Kyle Hebert (left), Nicholas Neilson-Slabach and Thomas Lee are working on a social media app called DaisNotes, a new connection tool made for college campuses. They recently received $10,000 from the Mississippi Seed Fund to develop the app, which is being used this fall at about 20 universities. Submitted photo

Three University of Mississippi alumni have developed an app that boldly aims to solve a very common problem: the feeling of being disconnected.

DaisNotes LLC – co-founded by Kyle Herbert, of Metairie, Louisiana, and Nicholas Neilson-Slabach, of Fort Worth, Texas – targets students and professors for note-sharing and social networking for their classes. They’re working with 2021 UM graduate Thomas Lee on the project.

Neilson-Slabach said he came up with the idea thinking there had to be better ways for people in classes to connect online and help one another learn.

The app works similarly to UM’s online learning platform BlackBoard but is more tailored for a mobile experience and allows for more instantaneous communications, much like social networking apps offer. The goal is to help students more easily forge those lifelong friendships that often bud during college years.

“When I was thinking about this, it was because I didn’t really have a way to talk to people who were in the classes I was in, and I knew there could be better ways to study and make friends and get to know people around you,” Neilson-Slabach said. “A lot of people would use GroupMe or WhatsApp to talk and discuss the class and make jokes. I realized that was hard and requires more steps.

“We were thinking (that) everyone is connected through their classes. We knew we could start there.”

The DaisNotes founders connected with Innovate Mississippi in June 2020, where they’ve received advice on their business plan, research assistance, connections to the Mentor Network and, now, the Mississippi Seed Fund award.

One of the founders, Herbert, said it’s been very helpful so far.

“They’ve given us a ton of exposure – we were a spotlight company, and we’ve gotten their mentorship throughout this process,” Herbert said in a news release from Innovate Mississippi. “They’ve connected us with important people at the University of Southern Mississippi to reach out to there, and the same at Mississippi State. It’s great to have those kinds of resources.”

The DaisNotes team is using its Mississippi Seed Fund money to develop an Android version, as it’s only available in iOS, the Apple mobile operating system.

It’s not the first set of funds the app has received. For winning the Gillespie Business Plan Competition in 2020, the group got office space at Insight Park, the university’s business incubator, and another $10,000 in startup funds.

The initial funding was given in two installments at milestones agreed upon by the company and the Center of Innovation and Entrepreneurship, or CIE, at the School of Business Administration. The money funded beta testing of the app, which launched in fall 2020.

DaisNotes has about 1,200 users at 20 different universities.

Besides the Gillespie award, the app, which was still only a concept, was recognized in 2019 at the Business Model Competition Regional Qualifier hosted by the Center for Innovation and Entrepreneurship, a division of the Ole Miss business school. The idea was developed while Herbert and Neilson-Slabach, an alumnus of the Sally McDonnell Barksdale Honors College and CEO of DaisNotes, studied at UM.

Lee, an Honors College alumnus from Gulfport who graduated in May with degrees in Arabic and political science, is designing the app. He believes it has huge potential.

“We have really tried to grow since January,” Lee said. “We are currently in about 20 different schools, and we have actually seen a network effect occur. I think this is a testament to the need for it.”

As the network grows and more users sign on, conversations inside DaisNotes will grow, Lee said. The team is also building a “professor portal” to enable teachers to view reports on the app’s usage among their students and send one-way messages to classes, for assignments or other announcements.

The app lets students anonymously raise concerns about academic fraud or bring other issues to a professor, which should improve academic honesty, the developers said.

“We have gotten some feedback from professors and that is that they like how quickly they can connect,” Lee said. “There is also a reporting feature for unauthorized test banks, or other issues.”

It also offers users a platform to talk about more than just academics, Neilson-Slabach said.

“What we see is the big vision of students being able to chat and share notes, and we have features to allow students to get into chatrooms and talk about their interests,” Neilson-Slabach said. “A nightlife chat room is popular on certain weekend days, for example.

“It’s just all about connecting students in the academic and social aspects of college.”

Clay Dibrell, co-director of the Center for Innovation and Entrepreneurship and a professor of management, said he’s enjoyed watching the project take shape from idea, to full business model to becoming a reality.

“At each step, you could watch their development, and to their credit, they drew upon the offerings offered through the UM Center for Innovation and Entrepreneurship, such as our entrepreneurs-in-residence, mentors and through taking our venture accelerator class,” Dibrell said. “All of these programs are open to students across campus.”

The team has done a great job of leveraging the campus’ available resources to help them succeed, such as the incubator space in the Innovation Hub at Insight Park, working with the Office of Technology Management and the Transaction Law Clinic, he said.

“Just as it takes a village to raise a child, it takes a strong entrepreneurial ecosystem to nurture ventures like DaisNotes to launch, and we have those resources on the UM campus, Oxford and in the state,” Dibrell said. “We are excited for them and future ventures being launched by our student and faculty entrepreneurs.”