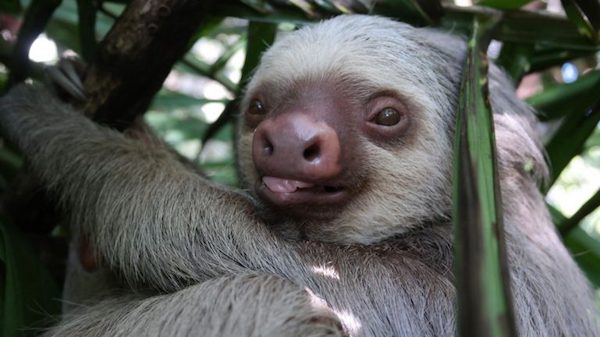 The sluggish sloth is hitting a cultural apex, with recent star roles in an insurance commercial, the animated film “Zootopia” and even as a special “referee” during this year’s Puppy Bowl XIV.

Maya Kaup, a University of Mississippi graduate student in biology, welcomes the rise of the sloth, slow-moving mammals noted for spending their unhurried lives hanging from trees in the rainforests of Central and South America. The California native studies these creatures in the laboratory of Erik Hom, UM assistant professor of biology.

Kaup is studying why sloths and their symbionts – fungi, algae and insects that live in sloth fur – have apparently formed mutually beneficial relationships.

“I’ve always loved sloths,” she said. “They’re one of my favorite animals and they have been for many years, and it’s all because I like the strange and the weird and the intriguing in nature.”

Kaup said there are many unanswered questions surrounding sloths and especially their algae, which have been thought to provide camouflage against predators, although there is little data to support this idea. While these algae have been found in sloth stomach contents and may offer sloths a nutritional boost, it is not clear how sloths are ingesting the algae since they don’t lick themselves like cats.

Besides studies in the field, Kaup also hopes to grow sloth algae in the lab setting to see if they might be of any medicinal benefit to humans. Species of fungi in sloth’s fur are known to produce potent anti-parasitic, anti-cancer and anti-bacterial compounds that may be relevant for drug development.

“Sloths are a challenging species,” Kaup said. “A lot of this is experimental, as no one has tried to grow the algae in a lab before.”

Hom said his lab’s research is generally focused on understanding the “rules” for how microbes interact persistently to form stable communities that perform specified functions. The research includes projects from field sampling and studying fungi, and algae and cyanobacteria that have been isolated from around the world to studying the microbial communities in fermented beverages such as kefir.

“My friends generally know me to be someone who is open and willing to pursue wacky ideas and projects if I feel there’s compelling science to be worked out,” Hom said. “I also believe in investing in people over projects. 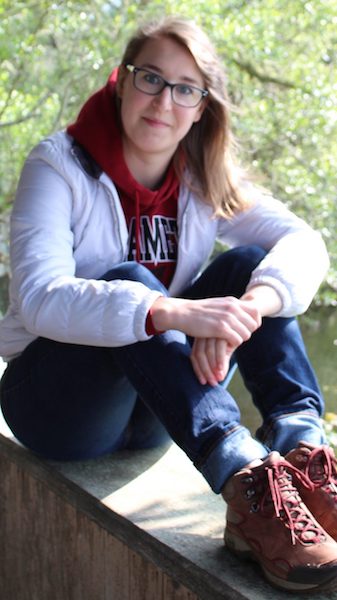 Maya Kaup is a University of Mississippi biological science graduate student whose research is focused on sloths and their mutualism with symbionts such as algae. Submitted photo

“Both of these convictions came into play when Maya joined our lab to pursue her research on sloths. I believe in what Maya can discover and believe there are some really cool discoveries to be made about the algae and microbes associated with sloths, as well as the sloths themselves.

“I’m a firm believer of focusing on ‘substance over optics’ – focusing on deeply interesting questions and doing our best to do excellent science. If Maya’s research is done well, it will get the attention of the scientific community, and the University of Mississippi will be acknowledged de facto.

“Maya happens to work on a very charismatic and timely creature that captures the hearts and imagination of many people, so ‘the sloth’ intrinsically brings attention to our work.”

Kaup’s research into sloths recently included three weeks during winter break at The Sloth Institute in Costa Rica. The institute, tucked along the Pacific Coast of the Central American country, has the mission of enhancing the welfare and conservation of sloths through research and education.

The institute also collaborates to rescue, rehab and release Costa Rican sloths, which include the Hoffmann’s two-toed sloth and the brown-throated three-toed sloth.

Institute co-founder and director Sam Trull said she was excited for two reasons when Kaup inquired about collaborating on a study to learn more about the algae that live in sloth fur.

“First, she aimed to answer questions that we have had for a long time, so it was very exciting to connect with someone who had the drive, expertise and willingness to help us get these answers,” Trull said. “Second, I was very impressed by her desire to put the welfare of the sloths as top priority. … Maya made it clear early on that she cared about sloths and wanted to work with them to help them.”

Kaup plans to return to the institute this summer for more research.

“With sloths, you need a lot of time doing field work because a lot of my time was spent sitting, waiting and watching,” she said. “Since they are so slow, it is actually very hard to catch them. You’d think it would be easy because they are slow, but they are way up in the top of trees, in the canopies, on tiny, tiny branches.”

The Arcata, California, native grew up along the Pacific Coast about five hours north of San Francisco, playing and exploring in the outdoors, and discovering “a ton of interesting organisms that kids can play with.” 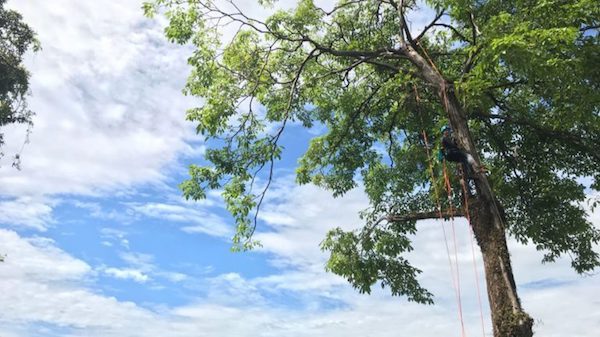 Sloths live in the tops of trees, making Maya Kaup’s experience as a trained tree climber handy in her research. Submitted photo by Sam Trull

Both her parents have a background in teaching, and her sister is a teacher as well. Kaup also volunteered at places such as the Sequoia Park Zoo in nearby Eureka, California, and the Humboldt Wildlife Care Center outside Arcata.

“I always knew growing up that I wanted to work with animals,” Kaup said. “In high school, I started thinking about what I wanted to do past college, and I knew I wanted to either work in wildlife rehabilitation or in zoos or in research.”

Kaup graduated from Willamette University in Salem, Oregon, in 2017 with a bachelor’s degree in biology. She also studied in Costa Rica at Universidad Nacional de Costa Rica during the spring of 2016.

Before graduation, she searched for a university where she could focus her research on sloths, animals that have seemingly defied evolution, because in nature, if speed equals survival, sloths have simply faced that fact and shaken their furry heads – lazily.

“Some of those things interact with their behavior. All those intriguing aspects of sloths drew me to them.”

Kaup moved to Mississippi, visiting the state and the South for the first time in her life on a recruitment visit to Hom’s lab in the spring of 2017. While the natural environment of Mississippi is not one of tide pools and redwood forests – and certainly no sloths – she’s found a different nature to embrace, and a university setting that is welcoming and supportive.

“Ultimately, my dream career would involve aspects of education where you educate kids and adults as well about the natural world and about wildlife and how to protect them, and would incorporate some aspect of research because I still have that drive to answer the questions that I have,” Kaup said.

“There are so many mysteries in nature, and I want to be able to answer all the questions I have. The only way to do that is through research.”

Individuals and organizations can make gifts to The Hom Lab by sending a check with the lab’s name in the memo line to the University of Mississippi Foundation, 406 University Ave., Oxford, MS 38655; or online at https://www.umfoundation.com/makeagift/. For more information, contact Hom at erik@olemiss.edu.