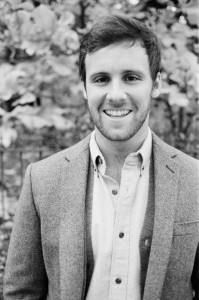 UM alumnus Patrick Woodyard is co-founder of a shoe company that provides fair wages and English and financial literacy classes to its workers in Peru and Kenya. He was recently named to Forbes 30 Under 30 list for 2016.

Patrick Woodyard, a 2010 University of Mississippi graduate, is co-founder of a shoe company that provides fair wages and classes in English and financial literacy to its workers in Peru and Kenya.

Those socially responsible business efforts have landed him a spot on the prestigious Forbes 30 Under 30 list for 2016.

Woodyard, 29, of Nashville, Tennessee, who majored in international studies and Spanish at UM, helped start Nisolo, which makes handcrafted shoes and accessories. Roughly translated, the company’s name means “not alone” in Spanish, which draws on the idea that small decisions can have a big effect on others and also on the global marketplace.

Nisolo’s success is a team effort, Woodyard said, and he sees making the Forbes list as a victory for his team.

“As an entrepreneur, I am so focused on the future and all that I think we can accomplish down the road that it is difficult sometimes to pause and realize how far we have come,” he said. “Receiving this award is certainly an indication that we are heading in the right direction. I do wish, though, that this were a team award and not one with my name on it.”

The list of people under age 30 is billed as “600 of the brightest young entrepreneurs, breakout talents and change agents in 20 different sectors.”

Some 200 workers help Nisolo turn out its men’s and women’s shoes and accessories. In its most recent fiscal year, the company grew by over 150 percent over the previous year and sold products in all 50 states and more than 50 different countries. The company’s leaders hope to expand their impact further into Peru and also create partnerships with producers in Kenya and Mexico.

“Our hope is to become a household name fashion brand known for its superior product and commitment to social impact in the fashion industry,” Woodyard said.

Nisolo shoemakers have increased their salaries by an average of 161 percent compared to what they made before starting with the company. The company has a savings and loan program and teaches classes on basic financial literacy.

The number of Nisolo shoemakers able to save money for the first time tripled to nearly 70 percent over the last year, Woodyard said. Several shoemaker’s children are attending college, and six of them will be the first college graduates in their families.

At UM, Woodyard studied global economics and business, Spanish and Latin American studies at the Croft Institute for International Studies, a period he calls a very formative time in his life. He was challenged by his peers and also benefitted from many mentors across campus. He was exposed to many ideas and practices to help him understand how business and the international marketplace can be used as a force for good.

“After working on economic development initiatives in East Africa, rural Mississippi and inner-city Memphis, and throughout South America – all of which, in one way or another, were connected to the university – I found my calling while at Ole Miss,” he said.

Woodyard’s story is fine example “of what an intelligent, hardworking young man or woman with a global perspective can do,” said Will Schenck, Croft associate director.

“We are happy to have been part of it. I am very impressed by Patrick’s ability to turn his passion for social and economic justice into a self-sustaining and ultimately profitable business. As he has demonstrated, there doesn’t have to be a contradiction between doing good and doing good business.”

Schenck remembers Woodyard’s leadership in international service as an undergraduate. He was involved in visiting and raising money and awareness for programs in Uganda. He studied Spanish for four years and studied in Argentina. He also worked on a micro-finance project in Peru after graduation.

Woodyard realized that there were many highly skilled shoemakers in Peru, but they had no access to global markets and many were poor.

“Patrick founded Nisolo to offer these shoemakers, their families and their communities a chance at economic improvement by marketing their shoes to consumers all over the world,” Schenck said.

The key to Woodyard’s success, and also the most impressive thing about the company, is the way the quality and appeal of their products are intrinsically connected to their model for the economic empowerment of partners in Peru, Schenck said.

“Some social enterprises market their products by promising to donate goods to those in need; Nisolo pays its partners a more-than-fair wage for practicing the trade that has been passed down for generations,” he said.

Jeff Jackson, associate professor of sociology, worked with Woodyard in 2009-2010 on his senior thesis examining the Argentinian soybean industry and the political and economic consequences of a soybean tax there. He credits Woodyard with inspiring other students to become involved in social entrepreneurship.

His former student also makes a fine product, he said.

“I bought a pair of his Nisolo shoes and they are among the most comfortable I have owned,” Jackson said. “I get compliments whenever I wear them. I currently have a Nisolo wallet in my pocket, which I also love.”

Woodyard has always worked with an imaginative curiosity and a steadfast determination, which has helped him succeed, said Douglass Sullivan-González, dean of the Sally McDonnell Barksdale Honors College and professor of history.

“He adjusted to disappointments with resolve and he finished his work with aplomb,” Sullivan-González said. “I watched the creation and growth of Nisolo with amazement. It’s truly an outstanding accomplishment for a gifted young man.”