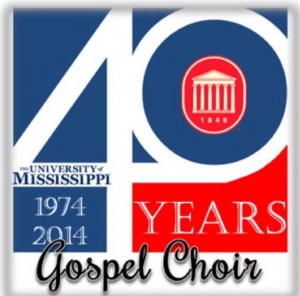 Four decades ago, a small group of African-American students at the University of Mississippi made their musical debut as the Black Student Union Choir. In November, the renamed and renowned UM Gospel Choir celebrates its growth, longevity and success with a weekend of competitions and a concert.

The Grammy-nominated choir hosts its 40th anniversary celebration Nov.14-15 at the Gertrude C. Ford Center for the Performing Arts. Scheduled festivities include an educational workshops and student panels for high school students from around the state, a choir competition for local churches and regional college and university choirs, and the UM Gospel Choir’s end-of-semester concert.

“The university wanted to showcase its choir in recognition of the service to the institution rendered over that 40-year span,” said Julian Gilner, UM assistant director of alumni affairs. “Seeing an opportunity to not only honor the choir, a group was pulled together, along with current choir leadership, to create a student recruitment day to recruit prospective students.”

Both UM staff and students expressed high expectations for the weekend.
“Whenever prospective students visit our campus, they can’t help but notice that Greek life is a strong presence here,” said Brandi Hephner LaBanc, vice chancellor for student affairs. “However, Greeks are not the only strong presence. This musical group of students continues to be a major asset to the Ole Miss community. Their obvious love for what they do and for each other is amazing.”

“We have reached out to local churches and also universities within Mississippi, Tennessee and Alabama,” said Justavian Tillman of Bruce, a sophomore education major and choir president. “There will be one grand prize of $1,000 to the winner. I am excited and highly anticipating a great celebration.”

“I enjoyed so much when it came to UMGC,” said Gloria Howell, who sang alto in the choir from 2008 to 2011. “I appreciated the fact that gospel choir was like a second family. And it felt great to be able to worship with people who shared a love for Jesus Christ and a passion for ministry through song.”

Howell, who served as an executive board member for the choir every semester except one, earned a bachelor’s degree in journalism and master’s degree in higher education-student personnel. She is a second-year Ph.D. student in the higher education student affairs program at Indiana University.

“Going to Monday night rehearsals was a perfect, refreshing way to begin the class-work week,” she said. “I also attribute my growth and development as a leader to my involvement with UMGC.”

Founded in 1974 as the Black Student Union Choir, this “no-audition” group steadily consists of 100-plus students, including 20 who run its operations. To finance their first album, 1999’s “Send Up the Praise,” choir members undertook a $14,000 fundraising effort. The successful campaign led to Malaco Records’ support of the live project with a mobile studio and mixing support. After hearing a copy of the live recording, the label’s executives decided to sign the group. The resulting CD was nominated for a 2000 Grammy Award for Best Gospel Performance by a Duo or Group.