Group members are excited about opportunity to sing at convention 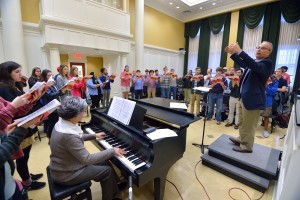 The UM Concert Singers are preparing for a performance at American Choral Directors Association convention in Chattanooga, Tennessee. Photo by Kevin Bain/UM Communications

As part of an invitation-only, 175-voice chorus, the University of Mississippi Concert Singers will perform March 10 at the American Choral Directors Association Southern Division Convention.

Forty-nine members of the UM ensemble will join singers from three other institutions to perform “Hymnus Paradisi” by Herbert Howells at the Tivoli Theater in Chattanooga, Tennessee. The event begins at 7:30 p.m.

The combined chorus includes UM, the Louisiana State University A Cappella Choir, the University of Kentucky Choir and the High Point University Choir.

“David Hill, conductor of the BBC Orchestra and Choir and former organist at Westminster and Winchester Cathedrals, will conduct this performance with the Chattanooga Symphony Orchestra,” said Donald Trott, UM professor of music and director of choral activities.

“The musical work is a multimovement composition that Howells (a prominent British composer) wrote upon the death of this son, Michael. This rarely performed masterwork is a difficult score, a thrilling challenge for the singers.”

Members of the concert singers have been rehearsing for several weeks for the convention performance.

“I’m looking forward to collaborating with the singers from the other institutions invited to participate,” said Sergio Vergra, a junior music education major from Olive Branch. “I’ve been to one ACDA convention previously, but this is my first time performing there.”

Vergra, who sings baritone/bass, said Howells’ work is nothing like the requiems he is familiar with singing.

“This is a very large orchestral work with jazz elements,” he said.

“Those elements create a unique texture compared to other, more traditional pieces.”

Freshman Pablo Frias said he is definitely enjoying being a part of the UM Concert Singers.

“This is all so new to me,” said the vocal performance major from Katy, Texas. “It’s fantastic to come in and be one of the top vocal ensembles in the state.”

Although Frias enjoys the frequent travels with the Ole Miss group, the ACDA convention trip somehow is different from the rest.

“First of all, not a lot of people are asked to perform there,” he said.

“This is a really big deal, especially because I’ve just gotten started in my formal higher education.”

While Vergra and Frias each aspire to become featured vocalists, Rachel Dennis said she prefers being out of the spotlight.

“Being a soloist would cause me a lot of anxiety,” said the senior vocal music education major from Olive Branch. “I just love choral music. Period. That’s why I’m looking forward to teaching choral music after graduation.”

As for Howells’ masterwork, Dennis agreed that preparation for this performance has been different.

“This is one large, very difficult work,” she said. “It’s given me a great opportunity to stretch my brain and my voice.”