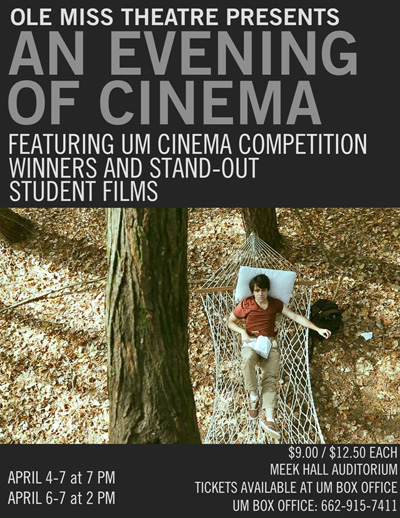 Fans of drama, musical, documentary and film noir are in for a treat. The University of Mississippi’s “An Evening for Cinema,” featuring the final projects of the 2012 UM Cinema Competition winners, debuts April 4-7 at Meek Hall Auditorium.

Although the event may appear to be a contest to see which student makes the best film, it actually works much differently, said Alan Arrivée, assistant professor of cinema and cinema director.

“Our cinema competition is important to student artists,” Arrivée said. “Yes, it gives them an opportunity to make films, but more importantly, it teaches them about the process. This is definitely more about learning than about wowing the audience.”

Prizes are awarded in several categories – documentary, dance, musical and narrative – based on pre-production packets, which included screenplay, storyboard, short list and vision statement. Several UM professors joined Arrivée to judge the competition, and winners were announced in the fall.

The 2012 UM Cinema Competition winners and runners-up slated to debut their final projects are:

– “Lifted” by senior Jordan Leigh Henry, winner in narrative 30-minute/pages or less. Henry, an English major, is the daughter Brock and Valerie Henry of Madison.

– “Morningtime” by senior Michael Woods, runner-up in narrative 30 minutes/pages or less. Woods, an English major, is the son of John and Nan Woods of Madison.

– “Talking in Bed” by juniors Mike Fant Jr. and Megan Justine Fowler, winner in narrative 15 minutes/pages or less. Fant, broadcast journalism major, is the son of Delesa Smith and Michael Fant of West Point. Fowler, an English and classics major and cinema minor, is the daughter of Danny and Maureen Fowler of Henderson, Tenn.

– “Eddie Rex: A Boy’s Best Friend, the Musical Extravaganza” by junior Connor King and sophomore Alex Thiel, winner in musical 15 minutes/pages or less. King, managerial finance major and cinema minor, is the son of Larry and Vicki King of Ridgeland. Thiel, English major, is the daughter of Bret and Adele Thiel of Brandon.

– “Bridging the Gap” by Mike Fant Jr., winner in documentary 15 minutes/pages or less.

The hard work and professionalism exhibited by the student filmmakers has paid off for some of them, who have had their works premiere at various festivals, including the Orlando Film Festival and Indie Memphis Film Festival, said Arrivée, who will host the four-day event.

“The winning films and stand-out works are not just course work films,” he said. “These are student-written, student-produced short films and student-acted, and it shows their ability to work together, plus their drive and dedication to the field.”

Fant, who is slated to have two works debut, said he could not have completed the projects without a dedicated team.

“I don’t think it would be what it is today without my team of filmmakers coming together and helping me get ‘Talking in Bed’ off the ground,” he said. “I worked on the documentary by myself, but it has not been an easy process without my team. I have most definitely learned that when it comes to filmmaking having a team is a must.”