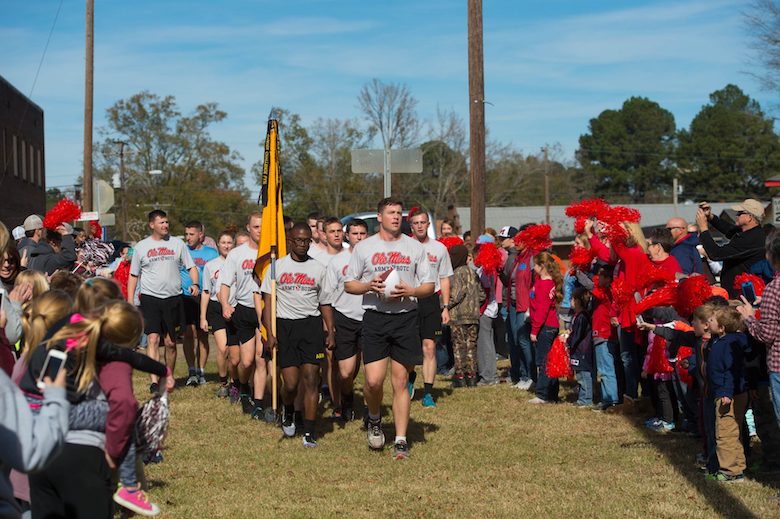 Two dozen Army, Navy/Marine and Air Force ROTC cadets from the University of Mississippi will arrive by van in Calhoun City Monday morning (Nov. 19) on a mission to retrieve the ceremonial game ball for the 91st Battle for the Golden Egg, but it will be their feet that bring them home to Oxford.

The ROTC’s Sixth Annual Egg Bowl Run will feature Ole Miss cadets taking turns trekking more than 40 miles, from the Calhoun City town square to the Lyceum, with the game ball in tow after receiving it from cadets from Mississippi State University. The transfer of the ball is to occur around noon at the gazebo in the Calhoun City public square.

The football will be signed by MSU coach Joe Moorhead, and Ole Miss coach Matt Luke will sign the ball after the cadets return it to Oxford.

Waiting in Calhoun City will be residents of the town, as well as fans who come from all over Mississippi to see the cadets meet, circle the town square with the ball, trade cheers and friendly trash talk, and eventually part, heading back to their respective universities.

“It’s breathtaking (when you come into town),” said Ole Miss Army ROTC cadet Sam Faulkner, an Egg Bowl Run veteran. “It’s a really fascinating site to see that amount of people show up in support of the Egg Bowl Run.”

The Egg Bowl Run began in 2013 as a way for Ole Miss ROTC to show its support of Ole Miss athletics. The event serves as a fundraiser for the Rebel Battalion Cadet Activity Fund. Supporters can visit the Army ROTC Facebook page, where a link will be posted to direct people to a donation website.

“Our cadets think this run is so important,” said Sgt. 1st Class Anthony Douglas with UM Army ROTC. “These cadets run in rain and sleet without ever complaining or feeling sorry for themselves.

“From the moment that they take over carrying the ball, their singular focus is to get that ball to the Lyceum. There’s a lot of dedication and resilience they will have to exhibit come (Monday).”

Laura Edwards, president of the Calhoun City Chamber of Commerce, said the event usually hosts some 500 fans, split down the middle between each school. Fans host tailgates, and there are activities for all ages. The National Guard provides an interactive military display for children and adults to enjoy.

Along the run back to Oxford, Ole Miss cadets greet fans and supporters, sometimes passing out candy to children along the route, Faulkner said.

“There is a really good split between fans of both schools to support the runners,” Faulkner said. “We have good support along the route with people who stop to cheer us on and say, ‘Hotty Toddy!’”

The tradition is catching on with Ole Miss fans, and support continues to grow, Douglas said.

“We’ve had a steady increase in fan participation,” he said. “Every year, there’s a few more Ole Miss tents and shirts in the Calhoun City square. Knowing that Ole Miss fans are there at the handoff means a lot to us all.”

And while the focus of the Egg Bowl often remains on the football field, Edwards said the Egg Bowl Run is a way to shift the attention to those who will serve the country.

“Our military doesn’t always get the thanks and notoriety that it should,” she said. “I think we need to keep that on the forefront of our children’s minds. They need to understand that freedom isn’t free.

“It needs to stay something that we have respect for, and we need to respect what (these cadets) do.”

Cadets see the run as a good chance to connect with not only their own classmates, but also with counterparts from MSU.

“I know a lot of older guys in the program that I’m friends with that said this is something you should experience,” first-time Egg Bowl Run participant Cole Cromwell said. “It’s a good way to meet cadets from Mississippi State and build connections.”

“We would prefer that the Calhoun City square looked more like a game-day Grove scene,” Douglas said. “It would be icing on the cake if businesses and the LOU community lined University Avenue on our way back into town or if they met us at the Lyceum at the conclusion of the run.”

Times may vary, but a link will be shared on the Army ROTC Facebook page where fans can keep track of the runners’ progress via GPS, Douglas said.