February 15, 2018  |  By Nathan Towery for the University of Mississippi Graduate School 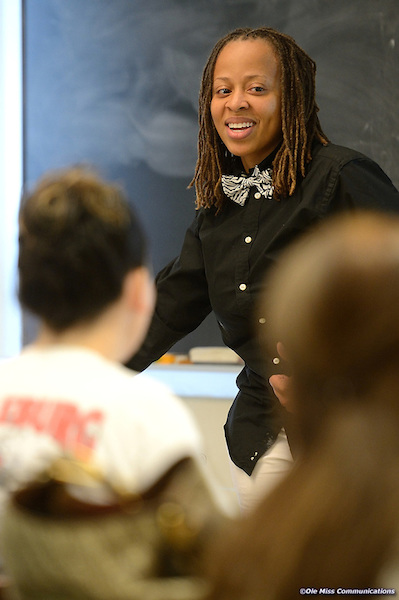 Torina D. Lewis, Ph.D., received the Vulcan Teaching Excellence Award earlier this year. Lewis is a University of Mississippi alumna and an assistant professor in the Department of Mathematical Sciences at Clark Atlanta University.

The prestigious award is given every year by Vulcan Materials Co. through the Georgia Independent College Association. It is given to the faculty member in Georgia who demonstrates the highest levels of leadership and scholarship inside and outside the classroom.

“Dr. Lewis’ effectiveness in the classroom is a shining example of the caliber of instruction and the level of challenge that students can expect at Clark Atlanta,” said Ronald A. Johnson, Clark Atlanta University’s president. “Her passion and enthusiasm give depth and hue to the university’s culture and are an essential building block in creating our global pipeline of scholarship, discovery, innovation and entrepreneurship.”

Lewis mentored the student winner of CAU’s 2017 Undergraduate Research Symposium and is also the recipient of CAU’s Aldridge-McMillan Award for Excellence in Teaching.

Her publications include “Bicircular Matroid Designs” (with McNulty, Neudauer, Reid and Shepardson) in Ars Combinatoria, 2013); “Square Functions as a Dynamic System” (with Ronald Mickens, Ph.D.) in Proceedings of Dynamic Systems and Applications, 2015) and her current work, “The Construction of the Inscribed Polygonal Periodic Functions,” which is funded by the National Science Foundation. She is collaborating with Mickens of Clark Atlanta University and Nancy Neudauer of Pacific University on this work.

Lewis is a member of the Phi Kappa Phi, Gamma Beta Phi and Pi Mu Epsilon honor societies; the National Association of Mathematicians; and Enhancing Diversity in Graduate Education.