Kennedy Center Awards for student performances in ‘The Laramie Project’

By Maggie McDaniel, March 21, 2014
Courtesy of The Daily Mississippian 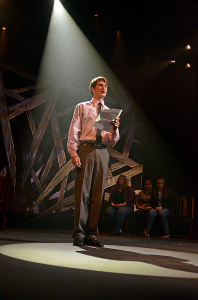 The John F. Kennedy Center for the Performing Arts in Washington, D.C. nominated two University of Mississippi musical theater students for outstanding performance awards for their performances in “The Laramie Project.”

Junior B.F.A. student Nathan Burke of Keller, Texas, and sophomore B.F.A. student Rachel Staton from Atlanta were nominated based on their individual ensemble as actor and actress in the play, originally performed last fall on campus.

The play is about an openly gay male who was murdered in Laramie County, Wyo.

The awards are part of the 46th annual Kennedy Center American College Theater Festival, which was developed by Roger L. Stevens in 1969 to encourage and celebrate theatrical productions nationwide.

Burke and Staton will receive the awards next month at the closing ceremony of the festival April 19 in Washington, D.C.

“This is very exciting,” said Rene Pulliam, interim chair and associate theater professor. “Think of it as The Tony Awards for college theater.”

Burke and Staton recently traveled to Roanoke, Va., with the production of “The Laramie Project” and the Kennedy Center American College Theater to perform the play for evaluation in the festival. It is rare for two students from the same school to be chosen for the same award, according to Pulliam.

Burke said he grew up loving movies and performing and loved to act out his favorite scenes from the movie “Dumb and Dumber.” During his time at UM, Burke has been cast in nine shows, including both main stage shows for the university and Ghostlight Repertory Theatre shows.

“He is a gifted performer who brings something special to all he does,” Pulliam said.

Staton grew up acting in school plays and participated in theater throughout high school. Staton was cast in the play “Urinetown” her first year as an understudy, but she did not land her first big role until “The Laramie Project.”

“She excels in comic timing and character work,” Pulliam said.

Both students said they were honored to receive the nominations for the awards.

“Of course I was ecstatic, flattered and completely floored because I did not expect it a single bit,” Burke said.

“I still cannot believe this happened to us,” Staton said. “Nathan is a truly gifted actor, and I am honored to be recognized on the same level as him,” Staton said.

“The Laramie Project” cast worked extensively with their director Rory Ledbetter on the play, in which Burke and Staton played multiple roles.

Last fall, the theater department’s production of “The Laramie Project” made national news headlines when members of the audience, including an estimated 20 UM football players, openly disrespected and disrupted the production by shouting derogatory slurs and heckling the cast members on stage. The incident was followed by a series of talks and seminars as UM addressed the issues of diversity and acceptance of others.

Burke said he found the controversy of the incident fascinating in many ways.

“I really believe it happened so that we could learn that we do have a place here at the university, and we do have the backing of not only the Oxford community but the community of theater artists throughout the country and the world,” Burke said.

Both students said they were overwhelmed and appreciative of the amount of support shown across the country after the incident, something that they both agreed has made them more secure as actors.

“The ‘scandal’ simply proved to me why I do what I do,” Staton said.