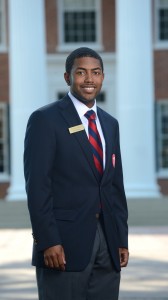 With many Mississippi schools struggling to attract effective teachers, Timothy Abram of Horn Lake has decided to take an alternate route into the teaching profession after graduation from the University of Mississippi.

A senior majoring in public policy leadership, Abram plans to enter the Teach For America program when he completes his degree in May. He is among many high-achieving University of Mississippi students who are willing to forgo the traditional trajectory of their chosen career to serve as educators in the state.

These students, who take an alternate route into the teaching profession, are recruited into the TFA program and trained for placement in high-poverty schools.

“I fervently believe that educational inequity is the paramount issue we must solve as a society going forward,” Abram said. “Teach For America affords me the opportunity to play a direct role in that effort by teaching underprivileged youth, many of whom look like me.”

Like many Mississippi residents, Abram wants to see his home state improve in tackling issues such as poverty, obesity, health and educational deficiencies.

“Improving our education system is way in which we can indirectly affect each of these ills that plague Mississippi,” he said. “I hope to play a role in a movement aimed at eradicating these problems.”

After growing to more than 550 teachers in 50-plus Delta-region districts in 2012, Teach for America expanded to launch Teach For America-Mississippi in 2013, focusing on deeply impacting the state independently.

“We know that in order to expand educational equity and opportunity for our students in Mississippi now and in the future, we especially need young, accomplished campus leaders like Tim Abram who are just launching their careers to join our movement,” says Ron Nurnberg, executive director of Teach For America-Mississippi. “Like so many others who have joined our ranks from Ole Miss in previous years, Tim promises to lead by example and craft a new day for us all in Mississippi.”

Abram chose the University of Mississippi because it seemed like the best fit for him.

“The Luckyday Scholarship provided by the Luckyday Foundation cemented my decision to attend,” he said. “The university was in close proximity to my home and with the combination of receiving a full scholarship, it made Ole Miss the logical decision.”

He majored in public policy leadership because he thought the field would provide him the ability to critically think about complex policy issues, as well as the training in writing and speaking in an effective way to elicit positive change.

“One of Tim’s key contributions to our university has been through his role as editor and writer for the opinion section of The Daily Mississippian,” Chancellor Dan Jones said. “His thoughtful use of that space for his writing and the writing of others has stimulated healthy and needed discussion at Ole Miss.”

Jones said Abram has a bright future with Teach For America. “Tim Abram is someone who makes others around him better people. He will make a difference in the world.”

After his two-year commitment with Teach For America, Abram plans to pursue graduate studies at Georgetown University.

His parents are Charlotte Jackson of Hernando and Timothy Abram Sr. of Southaven.