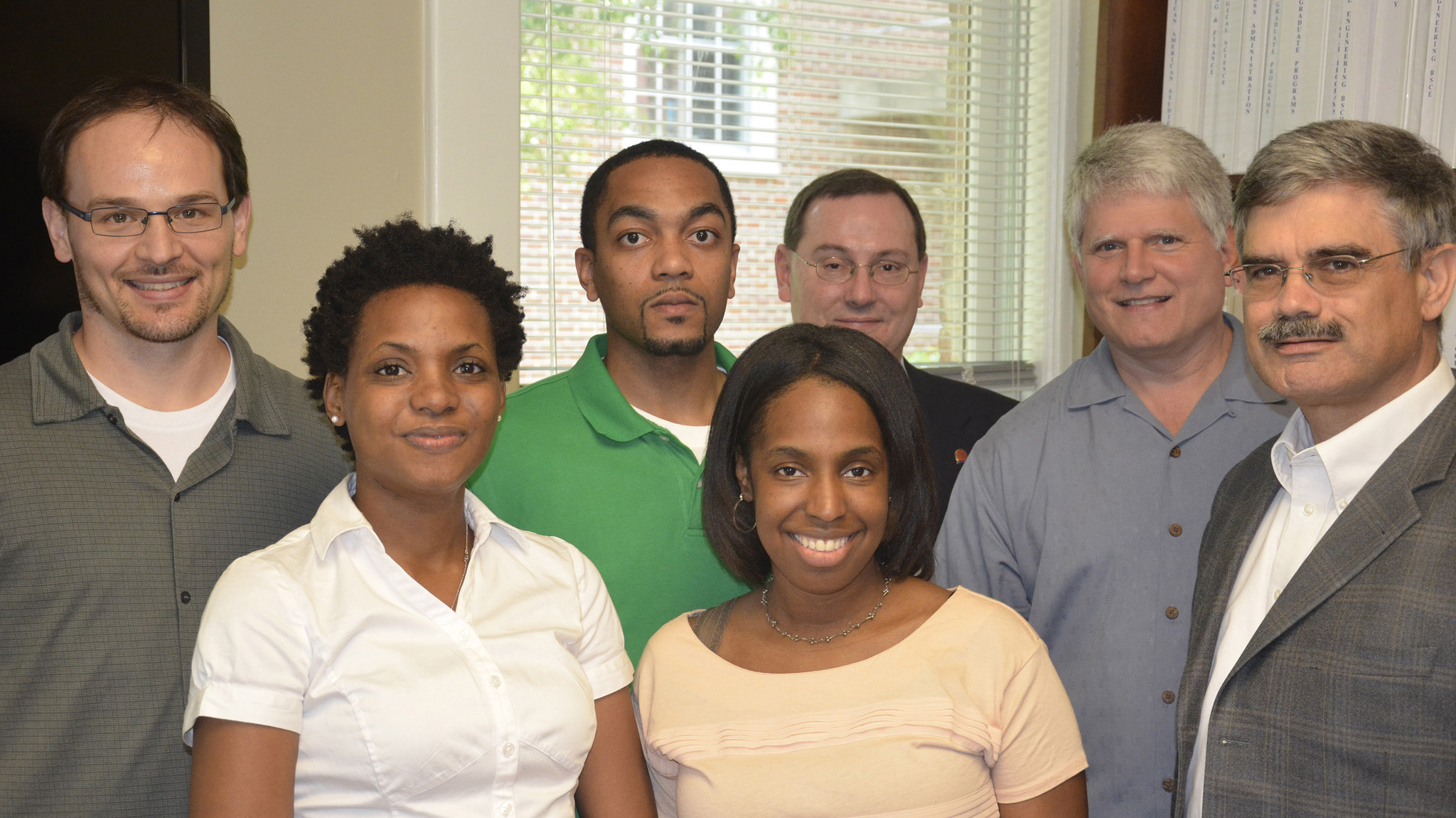 Less than a year after launching an aggressive initiative to increase the number of graduates in science, technology, engineering and mathematics fields, the University of Mississippi has recorded an impressive national achievement.

Friday evening (May 11), the university graduated three African-American students with doctorates in chemistry, an exceptional number for any university.

“On average, about 50 African-American students receive Ph.D.s in chemistry nationwide each year, so UM produced 6 percent of the national total,” said Maurice Eftink, associate provost and professor of chemistry and biochemistry.

The history-making candidates who received their degrees Friday were Kari Copeland of Coldwater, Margo Montgomery of New Orleans and Jeffrey Veals of Gloster. And a fourth African-American student, Shanna Stoddard of Louisville, Ky., is on track to earn her doctorate in chemistry in December.

“This is a significant achievement for these three graduates and their families, and it is also significant for the university,” Chancellor Dan Jones said. “UM 2020, our new strategic plan, calls on us as the flagship university of our state to lead our state and region in preparing professionals in science, technology, engineering and mathematics, especially from underrepresented groups.”

It is the second time in recent years that UM has set a benchmark in STEM fields. The university produced four African-American Ph.D.s in mathematics in 2006.

“That was an even more outstanding achievement given that there are only 15-to-30 African-American Ph.D.s in math granted each year. But the current achievement is still pretty noteworthy,” Eftink said.

Charles Hussey, UM chair of chemistry and biochemistry, lauded his faculty for their support.

“Our three students represent a significant proportion of the national graduates,” he said. “This department and its faculty are absolutely devoted to the success of minority students, regardless of whether they are undergraduate or graduate students.”

Overall enrollment of minority graduate students in chemistry and biochemistry at UM has been noteworthy over the years. In addition to the three students who graduated, four more minority students have passed their prospectus and are moving on to begin Ph.D. work.

“Hopefully, these graduates will view their UM experiences as positive and will spread the word, so that others may become interested in taking advantage of similar opportunities,” Hussey said.

The newest alums have already begun cheering for their alma mater.

“I am elated to earn my doctoral degree from the University of Mississippi,” Copeland said. “I feel my degree is just as worthy as a degree from Harvard or any other Ivy League institution.”

“I am truly honored to become an Ole Miss grad,” Montgomery said. “I hope to become a role model for future scientists. I want to remind students that no matter how impossible things may seem at times, if you continue to study and work hard, everything and anything is possible.”

“If you would have asked me nine years ago as a freshman if I would have a Ph. D. by the time I was 27, I would have laughed and said, ‘Yeah, right,’” he said. “Ole Miss has grown on me over the years, so it does feel good to have received it from here.”

Faculty advisers said each student was exceptional in his or her respective field of study.

“Kari’s general area is computational quantum chemistry,” said Greg Tschumper, associate professor of chemistry and biochemistry and Copeland’s adviser. “She worked on characterizing the subtle interactions between molecules that influence many important processes in chemistry and biology, including how molecules in our bodies – proteins and DNA, for example – recognize each other.”

Copeland completed both her bachelor’s and master’s degrees in biochemistry from UM. Her immediate plans are to continue research at Jackson State University as a post-doctoral researcher.

Walter Cleland, assistant chair and associate professor of chemistry and biochemistry, and Montgomery’s adviser, said she proved herself during four years of teaching at UM and already has tenure track offers from several colleges, including one in Mississippi.

“Margo has had a long road to this achievement,” Cleland said. “She has endured a lot and is one of the bright spots in our program. Her research in bio-organic chemistry is exceptional, but she is very interested in teaching. She’s done a fantastic job with the students she has mentored. We’re terribly proud of her.”

“Working with Jeffrey was every research adviser’s dream,” professor Steven Davis said. “He was very independent, hardworking and creative. One of the most memorable interactions was when he proposed a new method of interpreting strain energy in molecules that I had not even considered. It worked out remarkably well and will be a used in one of our publications.”

Copeland is a Southern Regional Education Board Scholar. One of the organization’s initiatives is to increase faculty diversity in America’s colleges and universities. “In light of this, I plan to eventually seek a faculty position,” Copeland said.

Montgomery holds a bachelor’s degree in chemistry from Xavier University of Louisiana. Her dissertation was on “Synthesis and Characterization of Nickel Complexes with Relevance to Acireductone Dioxygenase.” She hopes to develop a summer science academy where students from all walks of life are exposed to the sciences in a nontraditional manner.

“Creating an interest for science at an early age will hopefully encourage more minorities to study science in college and beyond,” Montgomery said. “No longer will it be a phenomenon to have three African-Americans graduate with a doctoral degree in chemistry, but rather routine.”

Veals, who earned both his bachelor’s and master’s degrees from UM, is to be a post-doctoral researcher at the University of Missouri. His long-term goal is to become a chemistry professor.

“I think many otherwise qualified prospective African-American students in Mississippi may think that a Ph.D. in chemistry is beyond their grasp,” Hussey said. “Our graduates speak loudly to them and say, ‘Yes, you can do it!’ Have courage. You can succeed at the highest educational level in the sciences.”

For more information about chemistry and biochemistry education at UM, visit https://www.olemiss.edu/depts/chemistry_biochemistry/.