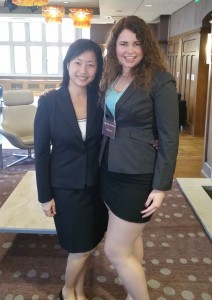 Student Hattie Fisher, left, pictured with Henrietta Yang, co-director of the Chinese Flagship Program, will begin her capstone year this fall to complete a semester of studies and an internship in China.

University of Mississippi students have once again ranked top in the nation, this time for placement in the Chinese Language Flagship Program capstone year.

Thirteen UM students were among the 63 applicants selected from 12 universities to study in China beginning this fall. That’s more than any other university. Participating students were selected in March, and UM students rose to the top in the selection process. Three of the top five applicants are from UM.

“I was ecstatic to receive my letter of acceptance,” said Hattie Fisher, an Oxford resident majoring in international studies and Chinese. “It was a validation of the Chinese language skills I have worked for four years to acquire, as it showed that all my hard work had indeed paid off, and I was good enough to be accepted into this exclusive program to compete with the best of the best Chinese (language) students.”

The capstone year is a national program that allows students to immerse themselves in native culture by spending two semesters in China. The first semester puts participants in two classes with Chinese students. During the second semester, capstone students complete an internship at a Chinese company.

Fisher will begin her capstone year in Nanjing this fall and is eager to achieve native-speaker proficiency.

“I eagerly anticipate the internship portion of the program, which will give me an opportunity to experience Chinese workplace culture and simultaneously gain professional experience, which will ultimately make me competitive in both the Chinese and American job markets,” she said. “Capstone will allow me to continue my exploration of China and its culture and people, which I have fallen in love with over these four years.”

Erin Dyer, a chemical engineering and Chinese double major from Oxford, was ranked No. 1 among students accepted for the capstone year. She plans to join Fisher in Nanjing beginning in August.

“It is a huge honor to be chosen to participate in the Chinese Language Flagship capstone program,” Dyer said. “I’m so excited to be part of a group made up of outstanding Flagship students from all over the country. The capstone year is the culmination of my Chinese studies, and I’m really looking forward to polishing my language skills and using Chinese in a real work environment.”

At UM, students complete double majors during their first four years, one of those majors being Chinese language.

“The goal is to train students to be global professionals,” said Henrietta Yang, co-director of the Flagship program and Croft associate professor of Chinese. “Our students are exceptional.”

Upon completion of the capstone year, students who achieve a superior level in their language proficiency receive certificates confirming that they no longer need testing to apply for government jobs requiring Chinese language skills.

UM has participated in the program for 13 years, and its students have dramatically improved their performance over that span. In the last two years, 22 UM students have been accepted into the capstone-year program, and all are expected to reach the superior level.

The Language Flagship is a national initiative to change foreign language teaching and learning in the United States, producing graduates with professional-level proficiency in their chosen language. The initiative offers programs in 10 languages across 22 colleges and universities.

For more information on the Chinese Language Flagship Program at UM, visit http://chinese.olemiss.edu.