More than 360 third-graders spent a day last week playing with dirt, touching turkeys and tasting stevia leaves at the University of Mississippi Field Station, all in the name of learning about science.

The Oxford Elementary School students participated in a fast-paced science clinic March 30 at the field station, staffed by volunteers from the USDA National Sedimentation Laboratory and several UM units, including the Department of Biology, Medicinal Plant Garden, National Center for Natural Products Research and the National Center for Physical Acoustics. The students visited 17 activity stations, where they learned about all sorts of environmental sciences, ranging from the activities of red fire ants to the characteristic sonic signature of tornadoes.

“Having this large group of scientists assist in talking about their research at the Field Station for all these children was an enormous help to our staff,” Highsmith said. 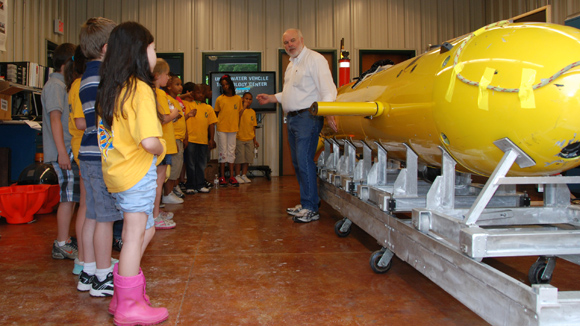 Ray Highsmith (right), director of the University of Mississippi Field Station and executive director of the National Institute for Undersea Science and Technology, shows third-graders from Oxford Elementary School how NIUST scientists use the submersible Eagle Ray to conduct research in the Gulf of Mexico. Photo by Michelle Edwards.

“Everyone made outstanding contributions, and the day was a great success,” said Mark Baker, Field Station resident director and organizer of the event. “We couldn’t have handled this large of a school group without our partners that volunteered to help.”

Most of the 17 activity stations began with questions from the scientists.

“What is this?” asked Seth Dabney, a National Sedimentation Lab researcher, holding up a soil sample.

He quickly answered his own question with, “Soil. Now, if I rub it on your jeans, what is it?”

Daniel Wren, research hydraulic engineer at the Sedimentation Lab, asked, “Where does water come from?”

Some students answer, “Rivers. Rain. The ocean. The water hose!”

Water is a main research theme at the Field Station, which has more than 200 experimental ponds.

The students were able to connect a lot of the Field Station experience with the science they’re learning in the classroom, said OES third-grade teacher Chasity Arbuckle.

“They’re asking so many questions; they’re very engaged!” she said.

Wren taught the students about waves and said, “They love to get their hands on the wave machine. They definitely want to touch it and see how it works, even if they get wet.”

Aruna Weerasooriya, senior research scientist at the UM natural products center, had arguably the most engaging of the stations, where he showed students many plants, among them tea and stevia plants. Stevia is used to make sugar substitutes such as Truvia and SweetLeaf.

Picking a few leaves, he offered them to students to taste. 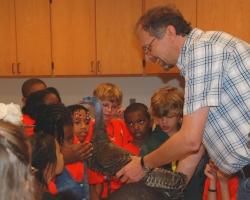 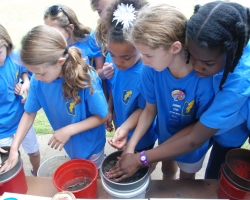 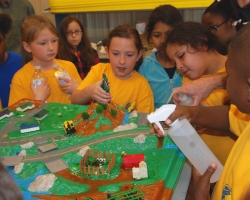 One of the most important takeaways for the kids was to learn about the principles of science, said Matt Moore, a research ecologist at the Sedimentation Lab who helped design the science stations.

“It’s not all rocket science,” Moore said. “Science can be down and dirty, too.”

Moore also wanted children to see that science isn’t as foreign as they might think and that scientists are normal people.

“They need to understand that science happens here in Oxford and that one of their best friends’ mom or dad might just be a scientist,” he said.

That understanding would be a good thing for Michelle Edwards, assistant to the director for marketing and business development with the Field Station and NIUST. One of her main goals is community outreach, which is tantamount to the Field Station’s mission: to preserve natural ecosystems and make the station’s entire 746 acres available for teaching and research.

“We’re trying to keep one small spot completely natural for researchers and teachers to use,” she said.

The clinic with OES students was deemed a success by the entire scientific group, Edwards said.

“With this event, we’re able to reach the general public because the kids go home and say, ‘Hey Mom, guess what we did today?’” she said.

For more information about the Field Station, go to http://www.baysprings.olemiss.edu.