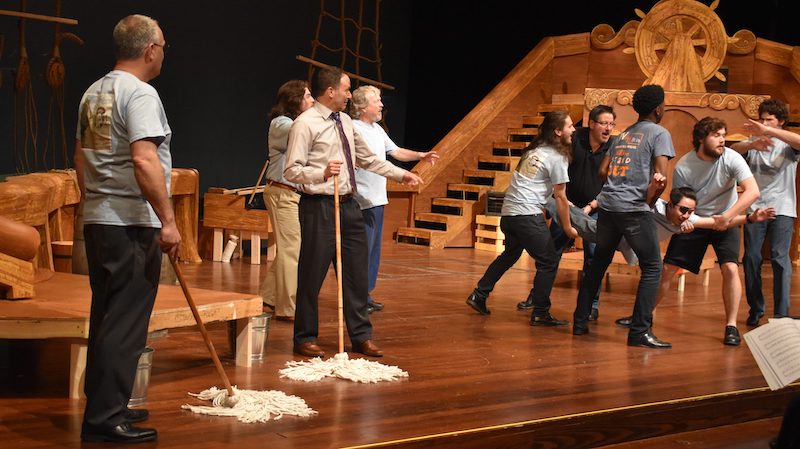 UM Interim Chancellor Larry Sparks (left) and liberal arts Dean Lee Cohen look on as their fellow sailors prepare to launch a mate overboard in rehearsals for the Opera Theatre production of ‘H.M.S. Pinafore,’ which runs this weekend at the Gertrude C. Ford Center for the Performing Arts. Photo by Lynn Wilkins/Department of Music

In this weekend’s production of the classic musical comedy “H.M.S. Pinafore,” don’t be surprised if you spot people you’re more used to seeing at the grocery or around town – even in the halls of the Lyceum – than on the stage.

The University of Mississippi Opera Theatre presents “H.M.S. Pinafore” at 7:30 p.m. Friday and Saturday (April 26-27) in the Gertrude C. Ford Center for the Performing Arts.

“My involvement was initially accidental,” said Patricia O’Sullivan, a writer, UM instructor in pharmacy administration and adjunct instructor in philosophy and religion. “My daughter was auditioning for ‘The Sound of Music’ but feeling nervous about having to sing in front of an audience, so I auditioned as well in solidarity.

For Dr. Jean Gispen, staff physician at UM Employee Health, the production has provided a pleasant diversion from her usual routine.

“I have enjoyed every bit of the preparation for the show,” said Gispen, who plays an aunt in “Pinafore.” “I’ll have withdrawal when it is over. It’s fun to sing every day.

“The students work hard, are pleasant to be around, are always polite and are exceptional musicians.”

Oxford attorney Jim DeLoach, who sang with the American Boychoir as a child, agreed.

“Some of these kids could have careers in New York; they are that talented,” he said.

“I have directed Gilbert and Sullivan operettas many times over the past 35 years and each one has been memorable,” said Julia Aubrey, director of UM Opera Theatre. “This production of ‘H.M.S. Pinafore’ is special to me because we have community members and university faculty, staff and administration on stage with the UM Opera Theatre student ensemble.” 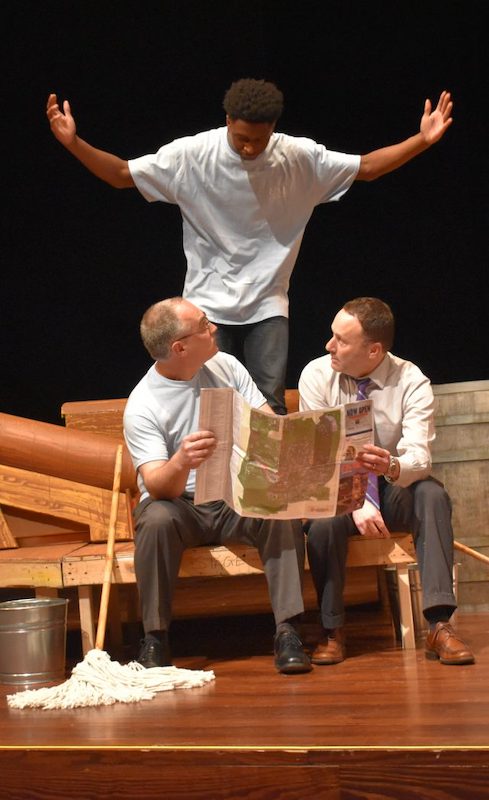 The cast also includes two “celebrity” guests: Interim Chancellor Larry Sparks and Lee Cohen, dean of the College of Liberal Arts, who perform in a special scene at the opening of the show.

“The students want us to share in this experience with them and enjoy it as much as they do,” Cohen said. “During our rehearsal, everyone we interacted with on stage was so incredibly supportive, understanding and patient with us as we stumbled our way through our scene.”

The students also appreciate the mix of student and community players, said Ben Rorabaugh, a master’s student in music performance from Long Beach.

“I’ve enjoyed seeing more informed choices in characterization, as well as different perspectives on music as a career versus a hobby,” Rorabaugh said.

“Music is not something the community cast members have to do, as they are all volunteers, but they choose to be part of our production for their enjoyment. This is humbling to me. And students and community members have formed lasting relationships.”

This experience has been particularly insightful for Ole Miss administrators, Cohen said.

“I very much appreciate Julia providing me with this opportunity,” he said. “I believe it’s good to do things outside your comfort zone every once in a while, and in this case, I get to experience firsthand the talents of our students, staff and faculty. I am honored to perform alongside these gifted individuals!”

Chancellor Larry Sparks noted that in rehearsal, he “was encouraged by the support and helpfulness of all those involved, as well as their talent and dedication. As a fan of the theater, it was neat to see ‘underneath the hood’ and witness the work that goes into a performance.”

The diverse backgrounds and experiences of cast members have made for an unforgettable production, Julia Aubrey said.

“It has been a wonderful process to watch individuals from varied professional paths and levels of performance experience come together on stage and create a unique collaboration with our students,” Aubrey said. “They have all learned from each other, and their diversity gives this storytelling a unique breadth and depth.

“The most important aspect for me is to hear how much they are enjoying their time on stage in such a beautiful theater as the Ford Center.”

“H.M.S. Pinafore,” or “The Lass that Loved a Sailor,” is known for its rollicking music and clever, funny lyrics; written in English, they highlight Gilbert’s arch British humor.

Rorabaugh, who plays leading man Ralph Rackstraw one night and a sailor in the chorus the other night, said that both parts give him “permission to be comic at almost any point. Rackstraw’s exaggerated portrayal of real emotions is extremely comic, and even within the chorus, each character expresses opinions and objections to the action, which adds to the general humor.”

Tickets, which range from $18 to $25 each, are available from the UM Box Office at 915-7411 or https://olemissboxoffice.com/, and at the door. Discounted tickets are available to UM faculty, staff, retirees and students.