April 13, 2015  |  by Anna McCollum
Courtesy of The Daily Mississippian 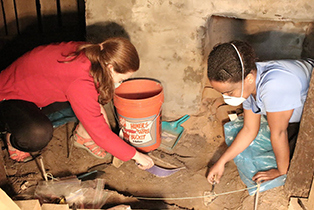 The Department of Sociology and Anthropology participated in an anthropological dig Sunday as part of Holly Springs’ annual Behind the Big House Tour.

As part of the town’s spring pilgrimage, Behind the Big House: Preserving the Histories and Architecture of Slavery tells the history of its slaves’ quarters. With approximately 20 of these structures still intact, Holly Springs has one of the largest inventories of these buildings in the South.

Three of the quarters were on display last week at Hugh Craft House, Burton Place and Magnolias. Visitors were able to tour each of these structures, which were chosen because of their variety and proximity to one another. In addition, professors and students from the department of sociology and anthropology conducted an archeological dig around the Hugh Craft House’s slave quarters, which was built in the 1840s.

“The houses are hidden in plain sight, but we’re trying to go a little bit beyond that and to see what things people left behind that we might not otherwise know about,” Freiwald said.

Freiwald’s curiosity was shared by the home’s owner, Chelius Carter, who started the Behind the Big House Tour along with his wife, Jennifer Eggleston, after they purchased the Hugh Craft House in 2008.

“Behind the Big House is one of our more unique preservation initiatives because it is basically the preservation of a culture that was an intricate part of making up Southern culture,” said Carter, president of Preserve Marshall County and Holly Springs. “Basically, it is offering up an opportunity for a former antebellum, plantation community that celebrates these big palatial mansions to tell a more fuller, complete, accurate story that by those tokens is more inclusive.”

This was also the mission of both Joseph McGill, founder of the Slave Dwellings Project, and Michael Twitty, a culinary historian who studies African-American foodways.

In a presentation Saturday at the Ida B. Wells Museum, McGill supplied in-depth information on the structures included in the tour, as well as what life would have been like living in them. Witty contributed cooking demonstrations, during which tourists learned what foods were eaten in the 1850s as well as how the slaves would have prepared them.

The archeological dig also explored the foodways of the nine slaves who worked at the Hugh Craft House.

“Specifically, we’re looking for any animals’ bones or any pottery to give us an idea of what it was like — how they used to eat and cook,” said Kyara Williams, a junior archeology major from Killeen, Texas.

For Williams and several other students, the dig for “Behind the Big House” was their first hands-on experience with archeology, according to Freiwald. Searching in the cellar and along an exterior wall of the structure where a porch once was, Freiwald and her students found old nails and other construction debris: charcoal, animal bone, ceramic pieces and a spot they believed to be the location of an old post.

These discoveries, along with other uncovered histories by the “Behind the Big House” project, all work together to supplement a narrative that has long been incomplete, according to Carter.

“We’re looking to offer up an option to retool that historical narrative and give this enslaved population a voice and a history in which they are silent, and in many ways, they are silent still,” Carter said. “When you do a tour of antebellum homes, and you mention nothing about the people that made that grand lifestyle possible, you’re editing history.”