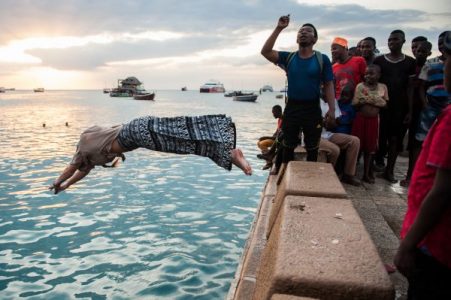 The winding, cobblestone pathways of Stone Town, Zanzibar are lined with endless ancient buildings whose facades are dominated by enormous hand-carved doors remnant of times when sultans ruled the land from grand palaces. Vendors in taqiyah caps and hijabs call out, beckoning to tourists that “looking is free!” Consistent with its reputation as the “Spice Island,” you can follow your nose past the Old Fort to the Forodhani Gardens that overlook the turquoise port of the Indian Ocean which is filled with wooden dhow ships. Here, local chefs and entrepreneurs offer dishes from traditional Arab and Indian influences including mouthwatering chicken shawarma, mishkaki and the famous Zanzibar pizza. A recent cholera outbreak led the current president to ban foods typically offered at Forodhani.

“It is was too bad our group missed out on all the delicious seafood and the fresh sugarcane juice with lime and ginger, but the reality of the outbreak and the need for clean and safe water was a lesson that we learned throughout our entire trip, and I hope it’s one that sticks” said associate professor of psychology Laura Johnson, who has taught the course in Tanzania since 2009.

This summer, 12 Ole Miss students traded the traditional Oxford classrooms for an invaluable experience led by Johnson and her team of partners in Tanzania. After getting up close and personal with lions, elephants and cape buffalo on safaris in Tarangire and the Ngorongoro Crater, we biked around Lake Manyara and discovered seemingly infinite varieties of bananas, including one specifically for making “mbege,” the local banana beer. We marveled at the carvings made by the Makonde refugees whose handmade creations spoke of their exodus from Mozambique, depicting starvation and importance of unity for survival. We toured huts made out of dried dung and danced with the Maasai tribe and also danced and beat the drums with the Iroq tribe, trying to learn something about the great cultural diversity in Tanzania which has over 120 cultural groups.

The next phase was for students to circumnavigate Mt. Kilimanjaro’s bumpy, muddy roads and stop in villages to participate in Johnson’s National Geographic Society grant to promote and study new methods of community conservation. Tanzanian partners from Jane Goodall’s Roots&Shoots program helped translate surveys into Swahili, and together we interviewed students, teachers and village elders to study the conservation initiatives, including biogas, fuel-saving stoves and tree nurseries. In conjunction with the Roots&Shoots anniversary initiative, we planted over 100 trees around the mountain. Johnson made use of a grant for internationalization, awarded by the Office of Global Engagement and the College of Liberal Arts to offer the research opportunity to UM students signing up for her course.

Sophomore Crissandra George studied Swahili at the university for a year prior to the trip and took the opportunity to join Johnson’s course.

“I enjoyed picking up a conversation with anyone,” she said. “It was very nerve wracking at first, but once you saw their reaction to us speaking, it instantly made me more comfortable.”

Giving formal speeches before meals and ceremonies plays a large role in Tanzanian culture and George was able to strengthen the bonds between cultures because of her language skills.

“It made us feel instantly connected with a crowd, even if our Swahili was horrible,” she said. “I discovered the connection you can feel with a person when you speak their language. You feel as if you have always known each other.”

According to Johnson, having the Swahili students was a huge plus: “It had a very positive impact on the group as a whole, Gracie and Crissandra encouraged everyone and more students were really trying it out this year, and it was very much appreciated.”

After visiting all the sites and getting to know our partners with camping, hiking to a waterfall, and dancing the night away came the ‘capstone’ experience, as Johnson calls it, “the village live-in.”

“The village living was a test of everything I had learned,” said Christina Harris, a senior social work major from Coffeeville. “We got a better understanding about how Tanzanians take what little they have and are able to survive off of it.”

Students each spent a night in a local home with a Tanzanian partner student in the Mweka village and a “Mweka mama.”

“It took me far outside of my comfort zone staying the night without electricity and even typical foods we had been eating,” Harris said. “My ‘mama’ practiced Ramadan during the day, but that didn’t stop her from preparing a feast for me.”

“The love we were shown from the mamas and our partners was immense,” Johnson said. “We certainly received a whole lot more than we gave—and we still have a lot to learn from the motherland. Life is respected as fragile, interconnected with nature, and there is a mutual and apparent responsibility for ensuring the well-being of others.”

This tradition was fostered by Julius Nyerere’s “ujaama policy” (collective work and responsibility) and naming Kiswahili as a unifying language.

“The media gives us such a distorted notion of the region and it is largely neglected in psychology and other disciplines as well,” Johnson said. “A correction is needed, and that is why living and working here, and sharing that experience with students, my family and my field is so crucial.”

One of the main events of the trip was experiencing the Muslim tradition, Eid al Fitr in Stone Town. Eid is the celebration and culmination of Ramadan, when the whole community comes together after a month of fasting during daylight hours. It is practiced worldwide, but in Stone Town, we got a unique experience because nearly the whole community practices Islam.  You could feel the excitement in the air.

“I awoke every morning at 5:30 a.m. to a sound that, at first, I didn’t recognize,” Harris said. “I soon learned that it was the Muslim call to prayer and became interested in the unique sounds.”

Harris had never witnessed such traditions and believes she acquired vital skills that will help her with her goal of becoming a social worker. “I learned to be more aware and understanding of what goes on around me. Cultural competence.”

During Eid, the Forodhani Gardens turned into what felt like a scene from a fairytale.

“Initially I was impressed with the town’s participation,” said Jaime Thomas, a senior anthropology major from Baton Rouge. “Although the holiday equivocates to our American Christmas, the community seemed more engaged with its celebration by gathering to share each other’s time, rather seeing lights or the anticipation of the arrival of Santa. We all enjoyed great priced street food and smiling faces regardless of our color, or religion, and especially overall appearance.”

“It will be like walking into a Disney princess movie,” Johnson told students before the trip. “Girls will wear beautiful dresses and have kohl eyeliner and intricate henna.”

This made an impression on Thomas: “My favorite part was probably the ostentatious image the women and girls pursued,” she said. “Their clothing provided an important representation of the women in the culture — they were able to express their individualism even with their covered heads and bodies.”

In Zanzibar, we experienced that beauty is measured not by the physical qualities that we are used to at home, but rather, by respect. Johnson asked female students to cover their heads with scarves at times, and the response was immediate. As soon as all heads were covered, local attitudes became noticeably excited and friendly. “Thank you for visiting Stone Town,” one man said. “You all look beautiful.”

Each night there was a group of boys who would do acrobatic jumps into the ocean off the docks. For Thomas, this was a golden opportunity to participate even though no women were jumping. “I did what I could to break a very apparent language barrier and asked about jumping too. One of the boys said, in broken English, ‘Of course you can!’ as if I should have already known.”

With everyone watching, she quickly decided to dive into the ocean at sunset. “Although it was just a jump, it had a huge impact to me to share a once-in-a-lifetime experience with the locals who enjoyed me jumping in as much as I did,” Thomas said.

After one of us dove deep, another climbed to the rooftop of Africa—Mt. Kilimanjaro. Senior Lauren Lewallen, a psychology major from Atlanta, was the only student from the group who decided to stay an extra week and take the trek.

“I love doing adventurous stuff, so hearing about that opportunity instantly sparked my interest,”  Lewallen said.

She had no expectations about the climb, other than the fact that it would be difficult as it is the tallest in Africa and she doesn’t usually hike much.

“People I told that I was doing it thought I was crazy, which made me want to do it more to prove that I could do anything that I decided to.”

Through steep altitude changes, negative temperatures and strong winds, she summited the mountain and accomplished her goal.

“Summit night was brutal. We woke up at midnight and hiked up from base camp in the dark with headlamps in the freezing, windy cold. We made it to the top at sunrise.”

A common phrase to hear in Swahili is “pole, pole” which means slowly, slowly. It represents the slow-paced Tanzanian lifestyle, but is also a vital mantra when climbing to avoid altitude sickness. Lewallen took that to heart and was able to avoid the sickness by hiking up further and then back down to acclimate her body.

“I was slow every day, which helped,” she said. “Everyone in my group was older and thought I was crazy for not training, but I ended up making it to the top before them. It just shows that it’s not all physical but also very mental.”

Now that we are back home, we want to share our new global understandings.

“I feel beyond fortunate to have been able to experience such an eclectic culture as Tanzania,” Thomas said.  “It taught me a lot about, as cheesy as it is, love. Without our group cooperation and general ability to get along we probably wouldn’t have been able to gain as much. But the love we all shared for various things that brought us together also was conveyed to the people we met, and in turn provided a bridge of cultures solely on our ability to come together in a peaceful, loving way.”

“This was a large, but very enthusiastic group,” Johnson said. “I relish seeing them experience such things that you know will change their lives. Watching Cady photograph an elephant bull and calf was a huge highlight for me. It was so intensely beautiful and real, and she cried. Intense reactions don’t always happen like that, so I started crying too.”

“This trip was one of the best things that has happened in my life,” Harris said. “In 29 days, I experienced so much more than I would have in America.”

Without resources that are seen as basic necessities in the United States like drinkable running water or electricity, we had to figure out new ways to do things. “You learn how find solutions to new challenges quickly,” Harris said.

“The whole experience was incredible,” Lewallen said. “Being surrounded by the scenery and beauty every day was amazing. And being able to say I accomplished making it to the top of Kili is something that I’m proud of that I’ll always cherish.”