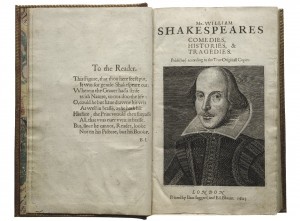 Ole Miss has been selected as the only college in Mississippi to host the original Shakespeare First Folio, and the month-long event kicks off Monday.

The University will host the First Folio as part of a national touring exhibition celebrating 400 years of Shakespeare. Many of Shakespeare’s most beloved plays such as “Macbeth,” “Julius Caesar” and “As You Like It,” are only known because of the book at the heart of this exhibition. His friends and colleagues created the folio in 1623, seven years after Shakespeare’s death in 1616. It includes 36 of Shakespeare’s plays, 18 of which were never printed before.

Marking the 400th anniversary of Shakespeare’s death, the Folger Shakespeare Library is sending the First Folio to every state as well as Washington D.C. and Puerto Rico.

There will also be performances, workshops, master classes, exhibitions and lectures throughout the First Folio’s tour here at the University.

Matthew R. Wilson, assistant professor of performance and director of Ole Miss Theatre’s “A Midsummer Night’s Dream,” said this exhibition is going to be very exciting for the University and Oxford community.

“For people around here to be able to walk up and read Hamlet’s ‘to be or not to be’ speech out of an almost 400-year-old book is, I think, a very special connection to history,” Wilson said. “Another thing that is exciting is the enormous collection of events planned. Departments all around campus have contributed to this. You had to put together a pretty big proposal to win your state’s slot.”

Ole Miss Theatre is presenting “A Midsummer Night’s Dream” in conjunction with the First Folio exhibition.

“’Midsummer’ is going to be a lot of fun,” Wilson said. “It’s been a while since we’ve done a Shakespeare play on the main stage. Even people who think that they don’t like Shakespeare will find a lot to laugh at and enjoy with ‘Midsummer.’”

Michael Whitmore has been the director of the Folger Shakespeare Library since July 2011. He said Shakespeare is one of the greatest storytellers of all time.

“His characters are familiar to us, and his words still excite artists, scholars and audiences around the globe,” Whitmore said. “He connects us to each other, to our history and to the themes and ideas that touch us every day. Shakespeare’s world is our world, and it is vast. We hope this exhibit invites everyone to come explore.”