By Virginia England, Courtesy of The Daily Mississippian

A few miles down Highway 334, a Spaniard who first came to The University of Mississippi to run track feverishly churns out pottery from an old-fashioned groundhog kiln.

Pablo Sierra does ceramics the traditional way. He digs his own clay from the soil in Yocona, kneads it in a clay mill powered by his horse and throws and sculpts the clay on a wheel in the studio he built behind his home. To complete the process, he fires the clay.

Sierra considers himself a craftsman, not an artist. He said the process is what brings beauty to his pieces, making them organic and authentic.

“There are beautiful traditions in the South; it’s funny how there are very few people who take the traditional approach here,” Sierra said. “American potters want to be viewed as artists who make one-of-a-kind work.”

“Pottery is one of those things where you don’t become somebody else because you move to different place, but it’s unconscious — like you don’t make Chinese pots in Spain,” Sierra said.

The main seller of Sierra’s pottery is Levi Hostetler, a member of the Amish community in Randolph.

Hostetler’s son is an aspiring potter and hopes to learn the traditional pottery techniques Sierra practices. Sierra is merely passing on what he knows to someone else, just as his former UM professor Ron Dale did with him.

Crask, 2001 by Ron Dale. Polychrome on wood and ceramic.

“I took classes under Ron Dale and I learned a lot from him,” Sierra said. “I may not have his same approach to the craft, but you learn from everything the more you see, and being exposed to different people is never going to hurt you. The more you see the better.”

Dale’s exhibit, Recollecting: 1980-2012, was on display at the University Museum until Jan. 11, 2014. It featured large-scale contemporary pieces that are constructions of wood and clay.

“All of my work comes from pots, and that’s where it stems and originates,” Dale said. “I know that some these things that I make and fire are to be used, but the other pieces make more obvious sort of statements. Handmade objects make statements in themselves, that it’s worth your while as a buyer because it’s special, handmade and distinctive.”

The job at UM is what first brought Dale to Oxford. He taught ceramics for 25 years before retiring. 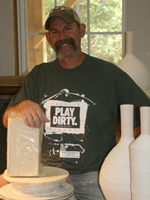 In 2000 Long was asked to be a visiting artist in UM’s art department and led a weekend workshop.

“I felt at home, and of all places, The University of Mississippi; I had never even been to Mississippi before,” Long said. “I said to my wife, ‘I don’t wish anything bad on Ron Dale, but if he dies I’m going to apply for that job.’”

When Dale retired in 2004, Long left the University of Florida for UM.

Long said he teaches because he feels he can make a difference in his students’ lives.

“The teachers I had were huge, and it’s a big deal to have teachers like that,” Long said. “I still think that that’s why I weather the storm of higher education because of how big of a deal a teacher can make in a young person’s life. They can change their future. I’m a kid who grew up in the mountains on a small farm and came from no money. I chose to do ceramics and here I am a professor at a great institution and to me that means all things are possible.”

Long said students play a large role in the community of Oxford through the Empty Bowls Project, which Dale brought to Oxford 13 years ago.

Empty Bowls is a national movement that raises money to feed those in need. All the proceeds go to the Oxford Food Pantry.

“I donate 200 bowls, and Pablo has given that many before as well, and Matt makes sure the students participate,” Dale said.

Keith Stewart, a former student of Dale’s, does ceramics in his studio located behind his home in Taylor.

But Dale’s classroom was not Stewart’s first introduction to ceramics. Stewart comes from a long line of potters — his family has been making pottery since 1888.

Stewart chooses to create utilitarian pieces instead of decorative pieces.

“I’m not making art, I’m making pottery,” Stewart said. “I find it infinitely more charming when someone calls me up seriously distressed because they broke their coffee mug and it’s the only one they want to use. It becomes something that they hold and put their lips on and their food in. It integrates with their life in a way that a painting can’t.”

Unlike Stewart’s, Long’s pieces are at the juncture between utility and artful concept.

Sierra considers himself a production potter doing mostly utilitarian work, but he does do some decorative pieces.

“There is nothing more beautiful to me than something that is functional,” he said. “The objects that you use every day to me are beautiful.”

Sierra continues to go against the grain of most American pottery, following his purest approach of digging it from the land. To him, it’s what seems natural.