The DM: Oxford’s literary history, future, Conference for the Book 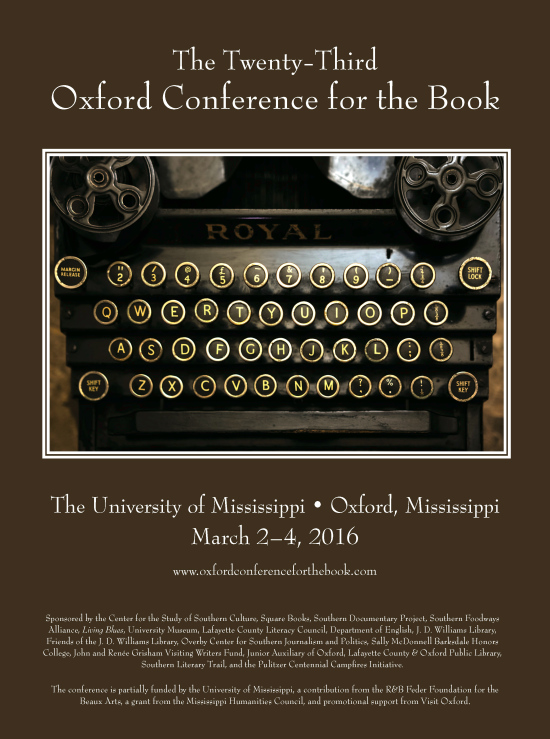 Established in 1993 by Ann Abadie, the then-associate director of the Center for the Study of Southern Culture, and Richard Howorth, the owner of Square Books, the Oxford Conference for the Book has become an integral part of the thriving literary scene in Oxford. Drawing a literary crowd of both established and up-and-coming writers, poets, novelists, bookmakers, book publishers and readers, the conference focuses on the “whole book,” not just any one particular aspect of the business. In this way, the conference’s multifaceted variety of events is suited for an equally large variety of attendees and interests.

Aside from the opening reception, which serves as a fundraiser for the conference, all events are free and open to the public. The conference is designed so people may come to as many or as few of the events that interest them without obligation to attend every panel or reading in the three-day affair. The different events are scheduled at several different places, such as the Overby Center, the J.D. Williams Library, the Lafayette County Courthouse on the Square, the University Museum and Off Square Books.

There are reoccurring events, such as the opening reception at the Barksdale-Isom House and the special Thacker Mountain Radio Hour, but the focus of the conference is less on tradition and more on bringing exciting, unique literary programming to Oxford year after year. This year marks the conference’s 23rd year in Oxford.

The conference will open 11 a.m. Wednesday morning with a welcome lunch at the Archives and Special Collections section of the J.D. Williams Library and close 5 p.m. Friday with the closing reception and book signing at Off Square Books. In between, a series of incredible, imaginative, unique events will take place, headlined by authors and other literary figures and industry members from around the country.

James G. Thomas, the associate director for publications of the Center for the Study of Southern Culture, said after this event, “inevitably [the attendee] will understand where we are, where we live, work and go to school, in a different context.”

Also on Wednesday, Kiese Laymon, the current John and Renée Grisham Writer in Residence, LaKisha Michelle Simmons, an assistant professor of global gender studies at the University of Buffalo, SUNY, and Ted Ownby, the director of the University’s Center for the Study of Southern Culture and professor of history and Southern Studies, will discuss “Growing Up in the South” at the Overby Center for Southern Journalism and Politics.

The University of Mississippi Museum will host to the exhibit “Of Rivers: Photography by Young Suh” 3:30 Thursday afternoon. Suh’s photographs will be paired with poems by Chiyuma Elliott, Katie Peterson, Derrick Harriell and Jericho Brown, who during the event will read their poems in response to a poem by Langston Hughes entitled “The Negro Speaks of Rivers.” After, there will be time for conversation as well as a few words from the artist, Young Suh.

“Having so many amazing artists assembled in the Museum to read poems and talk about art will be magic,” Chiyuma Elliot said. “It’s a good example of what happens when lots of people across the University think outside the box about creative work.”

Thacker Mountain Radio at Square Books will conclude Thursday’s events with live literature by feature guest authors Julia Claiborne Johnson and Ariel Lawhon. Friday morning, Vereen Bell, a longtime literature professor at Vanderbilt University, and Joseph Crespino, the Jimmy Carter professor of 20th-century American political history and Southern history since Reconstruction at Emory University, will discuss Harper Lee’s “To Kill a Mockingbird” and “Go Set a Watchman” at the Lafayette County Courthouse on the Oxford Square in what is sure to be a particularly poignant event given the recent death of the famed author.

“It is a good thing for us to have ‘Go Set a Watchman’ to remind us of how irrational and vicious and demented white racism became in the 1950s and 1960s, and what it felt like to be stranded in the midst of it.”

Crespino, who reviewed “Go Set a Watchman” for the New York Times, will respond to Bell’s paper with a discussion to follow.

Two Pulitzer Prize winners— Sheri Fink, author of “Five Days at Memorial: Life and Death in a Storm-Ravaged Hospital,” and Edward J. Larson, professor of History at Pepperdine University and author of “Summer for the Gods: The Scopes Trial and America’s Continuing Debate over Science and Religion”— will speak on Friday at the Lafayette Country Courthouse as part of the Pulitzer Prize Centennial Campfires Initiative.

This initiative seeks to “illuminate the impact of journalism and the humanities on American life today, to imagine their future, and to inspire new generations to consider the values represented by the body of the Pulitzer Prize-winning work,” in commemoration of the prize’s 100 year anniversary.

“I know we are in small-town Mississippi, but this is very much still a literary town,” Thomas said. “This one of the places where people like to come if they are writers—to come to the same town as William Faulkner, Larry Brown, Barry Hannah, and all those guys, Willie Morris, you could go on, and some really wonderful writers that continue that today.”

Oxford is steeped in literary tradition, and that tradition will continue with monumental events such as the Oxford Conference for the Book.

A detailed schedule for the conference, with locations and biographies of all of the speakers included, is available online at www.oxfordconferenceforthebook.com.