November 7 2017 By Jacqueline Knirnschild for The Daily Mississippian 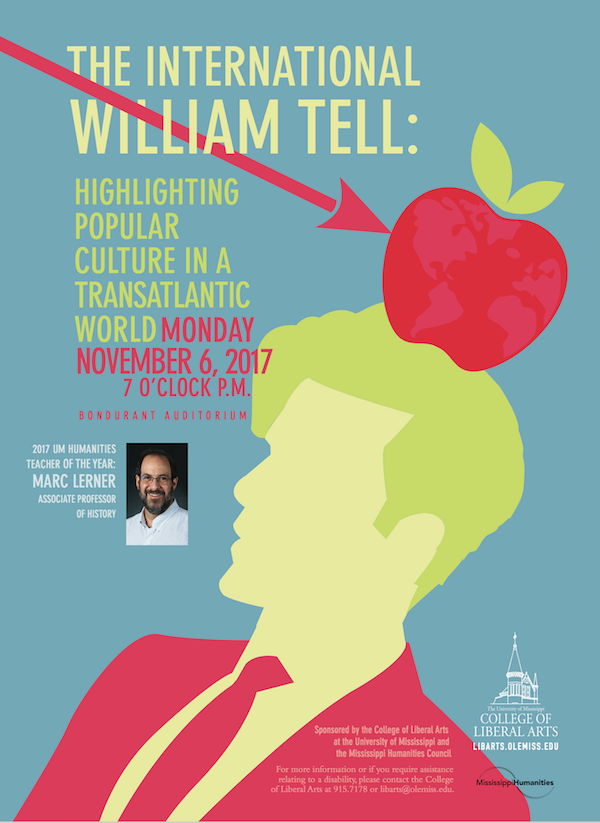 What does William Tell, the honest and virtuous Swiss folk hero who shot the apple off his son’s head and killed the tyrant, have to do with the mission of humanities?

UM Humanities 2017 Teacher of the Year, Marc Lerner, an associate professor of history, took the stage at Bondurant Hall Auditorium on Monday to explain how the 15th century tale of Tell spread throughout the globe and took on different revolutionary roles dependent on the geography and political context.

Lerner plays Gioachino Rossini’s 1829 opera to demonstrate how the music, along with Tell, is familiar, but lost, yet still powerful because of their reception and resonance.

“Rather than being complete historical records, the pictures of William Tell reflect the period and place in which they were recorded,” Lerner said.

In the first records, Tell is an expert marksman with a crossbow who not only shoots an apple off his son’s head but also assassinates the tyrannical leader Gessler, leading to the establishment of republican self-rule between the three forest cantons.

But there are many key questions left unasked that shape the message of the story, Lerner said. Who is the tyrant? Who overthrew the tyrant or tyrants? What type of self-rule was established? Did Tell organize and lead the movement himself? Was Gessler a local aristocrat or a foreign bureaucrat?

Such omitted details are what allowed years of plays, operas, songs and chronicles to mold the story to match their political agenda. By defining a tyrant as either a local aristocrat or foreign oppressor, the author can also define the type of rebellion he or she follows.

Binary storylines thus emerged, Lerner said. Tell is either supporting the elite leadership of the Swiss or arguing for more popular input in politics.

“Tell either acted in defense of his family against a foreign tyrant and continued to respect the authority of the local elite or he was a popular revolutionary who sought to overthrow aristocratic rule,” Lerner said.

Lerner said the number of varieties of Tell’s story can be used as a source base to examine how political symbols, rhetoric, culture and material culture shape the revolutionary experience.

“Part of my argument today is that ordinary people participated in the evolution of the symbol and the making of different meanings,” Lerner said. “Popular culture matters.”

The image of Tell crossed the Atlantic and became popular in American operas during the 1800s. Two male actors became well-known for playing the role of Tell — English William Macready was seen as feminine and associated with French elites, whereas American Edwin Forrest was seen as masculine and a symbol of national pride.

These personas sparked the Astor Place Riot in 1849 in New York City, when 1,800 spectators blocked the entrance in protest against Macready’s role as Macbeth. The actors represented the binaries in class issues and national rivalries.

In earlier records of Tell, songs used his story to bolster the popular rebellion and overthrow the tyrant, whereas chronicles were made by the Elites to expel foreign rulers and return to the status quo.

Such songs were written and sung by ordinary people, pointing to the ability of the individual to shape society.

“Popular culture itself matters, and it’s always mattered in creating a society,” Lerner said. “Humanities are not just engaged in by faculty in specific academic departments but more broadly, as well — people have always had the power to change their society.”

Lerner earned his Ph.D. from Columbia, joined the Ole Miss community in 2005 and focuses his research on revolutionary Europe through a comparative lens.