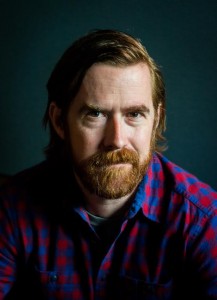 Darren Grem joined the history and Southern Studies departments at the University of Mississippi in 2013 after he graduated with his doctorate in 2010. During his few years here, he has rooted himself in Oxford’s culture and music scene.

Grem is an assistant professor, but he is a musician when he is not grading papers, playing with his band Darren Grem and the Yellow Days.

Growing up in the old mill town of Rock Hill, South Carolina, he developed an interest in music at a young age. His early musical influences include Johnny Cash, Merle Haggard, Nirvana, R.E.M. and The Replacements.

“I grew up in a church and sang alongside my mom who is quite a good singer,” Grem said. “I really started singing and playing out, writing my own stuff, that kind of thing when I was a teenager.”

The origins of the band are essentially the same as any other; a group of guys who like making music decided to get together and do what they enjoy doing.

“We came together at the tail end of last summer,” Grem said. “They’re just guys like me. I mean, they have regular jobs. I just kind of know the guys from around town. We got together really first with our bassist and drummer. Then a friend of mine that plays in more of a singer-songwriter group was interested in playing in a rock band so I told him bring your guitar and your voice.”

Since teaming up to form Darren Grem and the Yellow Days, the band has frequented small music venues around Oxford like The Blind Pig, Shelter on Van Buren, Proud Larry’s, Rooster’s and Cups.

Consisting of five tracks, Darren Grem and the Yellow Day’s first release is a self-titled EP that they put out late March. Their music can be accessed at degrem.bandcamp.com or on the band’s Facebook page.

Each track on the EP is more than a song; it is a narrative that could stand alone outside of a collection of songs, similar to an individual’s life told in the span of five minutes.

“They’re fictional in the sense that nobody in those songs are real,” Grem said. “The five songs are five different people. They’re composites of people that I either knew or maybe a little bit of me and on a line or two there, something I thought of or felt at one point. Other times, it’s just stuff that I made up, just an image that struck me and I kind of rolled with it.”

Grem said his background as a history teacher has an influence on the situations and subject matter discussed in his music.

“I find it very boring to write about myself,” Grem said. “The EP and album that we’re working on is very much stories about people in a neighborhood and it helps in a sense to think about what’s really behind these people’s lives and why they’re making it or not.”

Grem summarized his music best, saying, “I like to refer to it as stories with amps.”