The DM: Former Professor Remembered After 40 Years of Influence

Friends and family remember theater professor Jim Shollenberger at a memorial service in the style of a play, complete with its own playbill Sunday at the Powerhouse. Photo by: Elizabeth Blackstock/The DM

Playbills were printed, the house was packed and the stage was set. But when friends of Jim Shollenberger gathered to celebrate the life of the former UM theater chair, the show was to go on without its star.

The director, writer, performer and mentor of many died Jan. 31 of cancer. He was 72.

Shollenberger taught at the University and served as chair of the theatre department from 1985 to 2002, as well as serving two years on the Oxford Board of Theater. He worked in the UM theater department for almost four decades. He earned a Purple Heart in Vietnam, and his colleagues said he brought a dream to Ole Miss Theatre.

“It’s hard to put into words just how he’s touched my life,” said Jaime Adams, treasurer of the Oxford Board of Theater. “I can only imagine how many lives Jim has touched.”

Adams acted in two of Shollenberger’s plays, and was cast in his final show. She and other members of the Board of Theater performed one of the director’s 10-minute plays as part of the celebration Sunday. Adams remembers Shollenberger, or Jim, as she calls him, for his ability to make others laugh.

“Comedy— that was were he was very skilled,” Adams said. “He’d take those of us who knew nothing about any of it and make us feel like professionals.” 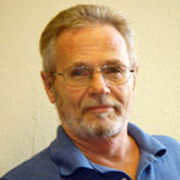 In a theatrical style suited for Shollenberger, a table of playbills for the memorial was set just inside the entrance. The playbill named the show “Sunday in the Powerhouse with Jim,” a reference to the Broadway show “Sunday in the Park with George.” Sunday’s “show” was divided into three acts with two intermissions.

Gail Stratton began the first act with a memorial speech, backed up by a choir.

Stratton said Shollenberger waged a five-year war on cancer with the same remarkable enthusiasm he held throughout his life. Shollenberger’s courage and talent shone through in Stratton’s stories about his life.

“This is a lovely tribute to his life and his impact on others’ lives,” former UM teacher and administrator Gloria Kellum said.

Michael Campbell, a 1991 alumnus of Shollenberger’s theater program, drove from Lawrence County, Tennessee for the memorial. Campbell said he remembers the surprise he felt when Schollenberger invited him to get coffee after arguing Campbell’s senior thesis with him.

“Jim demanded everything and more from his students and usually got it,” Campbell said.