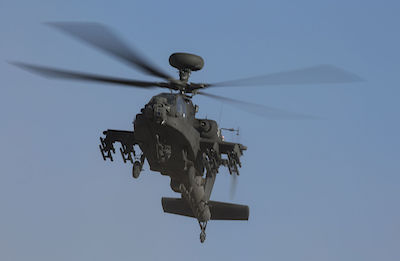 When Jessi McCormick was a child, if you would have told her what she would be doing in 2016, she would have never believed it.

“I never, ever as a kid would have ever thought I’d be an Apache pilot,” she said. “It’s the greatest feeling.”

The Boeing AH-64 Apache is the most advanced multi-role combat helicopter for the U.S. Army and a growing number of international defense forces.

The 31-year-old Olive Branch resident, now a warrant officer, is the first female Apache helicopter pilot in the Mississippi National Guard. She started out as a Marine, joining in 2003 as a military police officer. After four years and two deployments, she left the Marines, but joined the National Guard a year later.

McCormick was an MP with the Clinton unit for a while, deploying again in 2009-2010, and moved to the public affairs unit out of Jackson. While she was deployed to Afghanistan in 2013, the urge to fly hit her.

“When I was in Afghanistan, I was flying around a lot, and one day I was flying in a Blackhawk looking out the side of it and I thought, ‘I kinda want to fly,'” she said. “That was one of those things I hadn’t tried and I figured it would keep me interested. So I decided to inquire about the path to flight school.”

McCormick is finishing a psychology degree from the University of Mississippi, and she wants to use that degree to be a counselor for veterans. She’d also like to fly for law enforcement, and “for the Guard for as long as they’ll let me, until they kick me out.”