The Clarion Ledger: Elise Winter: A Lifetime of Giving

April 11, 2015 | Excerpts from Billy Watkins’ story in The Clarion-Ledger 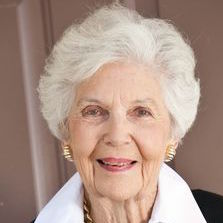 Elise Winter will receive the 2015 Governor’s Initiative for Volunteer Excellence Lifetime Achievement Award for her work with Habitat for Humanity Mississippi Capital Area, which she founded 29 years ago. | Photo: The Clarion-Ledger

“…doing for others is what Elise Winter (BA history and political science), the wife of former Gov. William Winter, is all about.

On Monday, she will receive the 2015 Governor’s Initiative for Volunteer Excellence (GIVE) Lifetime Achievement Award at a luncheon at the Mississippi Museum of Art in Jackson.

Truth is, there are probably a dozen reasons Elise Winter deserves this honor. Officially, it’s for her work with Habitat for Humanity Mississippi Capital Area.

She founded the organization 29 years ago. Since then, 600 Habitat houses have been built in Hinds, Rankin and Madison counties for people in need.

Winter’s work didn’t stop in the board room. Time and again, she could be seen — without fanfare — painting walls and hammering nails.

“It’s always been special to her,” says Lele Winter, the Winters’ middle child who lives in Oxford with her husband, Guy Gillespie, and their three children. “I can remember coming to Jackson, and the first thing she wanted to do was take us to see the new Habitat home they had just built. She would tell us about the family who was moving in. She would just beam with pride.”

It’s difficult to get Elise Winter to talk about her accomplishments. But during an interview for this story, she let her guard down just for a moment when the subject of Habitat and what those 600 houses have meant to the people who moved into them.

“The whole thing started with a little dream that we could help people live in better conditions,” she says. “To think that we’ve built 600 houses, and to consider that each house was the home to two or three people … that’s a lot of lives touched.

“I think being a mother helped me understand how important it is to live in a nice home. I don’t mean big or fancy. But nice. It thrills me beyond words and gives me chills every time I see a family move in.

“And I’ll never forget what one person said: ‘I am finally out of poverty.’ That really hit me hard.”