The Chronicle of Higher Education: The Lazarus Project 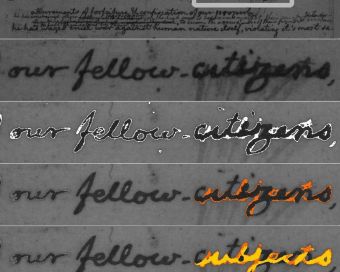 An imaging of Thomas Jefferson’s draft of the Declaration of Independence, done by Fenella France in 2009, revealed that the founding father had originally referred to nascent Americans as “subjects,” not “citizens.” | Library of Congress image

For centuries, textual ghosts have lived among us.

Sequestered, often moldering, in libraries and archives from Paris to the Sinai are a trail of manuscripts that, through a variety of insults, be it fading, overwriting, or firebombs, have turned indecipherable to the standard scholarly eye. They reward no amount of traditional paleographical patience. They have been present, but lost.

That literary purgatory has begun to end, however, thanks to a small team of humanists, scientists, and engineers who, over the past 15 years, have quietly revolutionized what scholars can recover from damaged sources. Their methods, enabled by an array of digital lighting and imaging techniques from the world of satellite surveys and national security, are collectively called “multispectral imaging” and could open a golden age of new primary sources — that is, if other scholars will use them.

“Humanities researchers need to understand that multispectral projects can fundamentally change the way we do research,” said Gregory Heyworth, an associate professor of English at the University of Mississippi and director of the Lazarus Project, which hopes to give a diverse array of researchers access to those tools at little cost.

As Mr. Heyworth sees it, classicists and medievalists have two choices: They can provide another sliver of interpretation on a text that has been picked over a thousand times before, or they can comment on a previously unknown work. “How much better,” he said, “to write about a text nobody has read?”