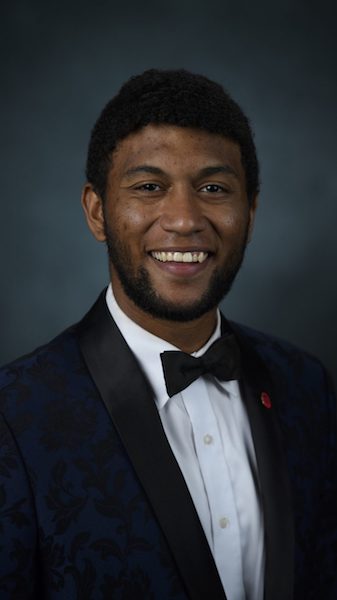 University of Mississippi senior Terrius Harris and Ann G. O’Dell, president of the board of directors of the Pantry of Oxford-Lafayette County, are being honored with 2018 Algernon Sydney Sullivan Awards in recognition of their volunteer work in the Lafayette-Oxford-University community.

The awards will be presented at the Celebration of Service at 3 p.m. April 3 at The Inn at Ole Miss.

Three other Ole Miss students are Sullivan Award finalists. They are Zacchaeus McEwen, a senior integrated marketing communications major from McComb; Sarah Robinson, a senior Spanish major from Covington, Louisiana; and Yujing Zhang, a second professional year student in the School of Pharmacy from Oxford.

“The University of Mississippi has a unique responsibility to encourage, support and honor members of our campus who are actively engaged in community work,” said Katrina Caldwell, vice chancellor for diversity and community engagement. “This annual recognition is an opportunity for us to showcase those individuals who contribute greatly in our mission to serve beyond the walls of our institution.”

“To date, we have recognized 12 Sullivan Award recipients and 15 Student Sullivan Award finalists for their selfless service to others,” Martin said. “These honorees come from diverse backgrounds, academic disciplines and career paths, but they share a commitment to service that is truly inspiring.”

Having nominated Acacia Santos for the Sullivan Award last year, Harris said he instantly knew what the award represents, and it was the greatest honor to have been nominated and chosen.

“I believe that no service goes unseen and that everything we do touches someone in ways that we can never imagine,” Harris said. “Receiving this amazing honor only verifies that belief. I will continue to be true to who I am by being kind to everyone I meet and continuing to give back to others when they are in need.

“For I believe that the future we all want to see begins with one kind act at a time. Because kindness is contagious and is the foundation of our most instinctual human behavior, all we have to do is remember to let it shine through.”

An international business and French major, he also served as vice president of administration for the UM Residential Housing Association and had a program selected for the “Top 20 Program” at the South Atlantic Affiliation of Colleges and University Residence Halls

Harris has served with the McLean Institute’s Catalyzing Entrepreneurship and Economic Development initiative, as well as with College Corps and Ole Miss Ambassadors, in addition to years of volunteer work.

O’Dell said that she acted on her inspiration to address food insecurity through service in 1982.

“I knew that more would come than I could possibly act on,” she said. “I look forward, however, to acting on as many as possible for the rest of my life.”

She also has worked as a volunteer with the Oxford Pantry and has served on the pantry’s board for several years. O’Dell expressed gratitude for the recognition.

“I know the significance of the award because my son Dee attended Hampden Sydney College, and at his graduation ceremony in 1987, he was honored with the Sullivan award,” O’Dell said. “To follow in his footsteps by receiving this honor gives me great joy.”

The Algernon Sydney Sullivan Award was established in 1890 to honor individuals who exhibit nobility of character, exemplified by selfless service to others and the community. Award criteria emphasize placing service to others and the community before oneself, while embodying the qualities of honesty, morality, ethics, integrity, responsibility, determination, courage and compassion.

For more about the McLean Institute, visit http://mclean.olemiss.edu/.