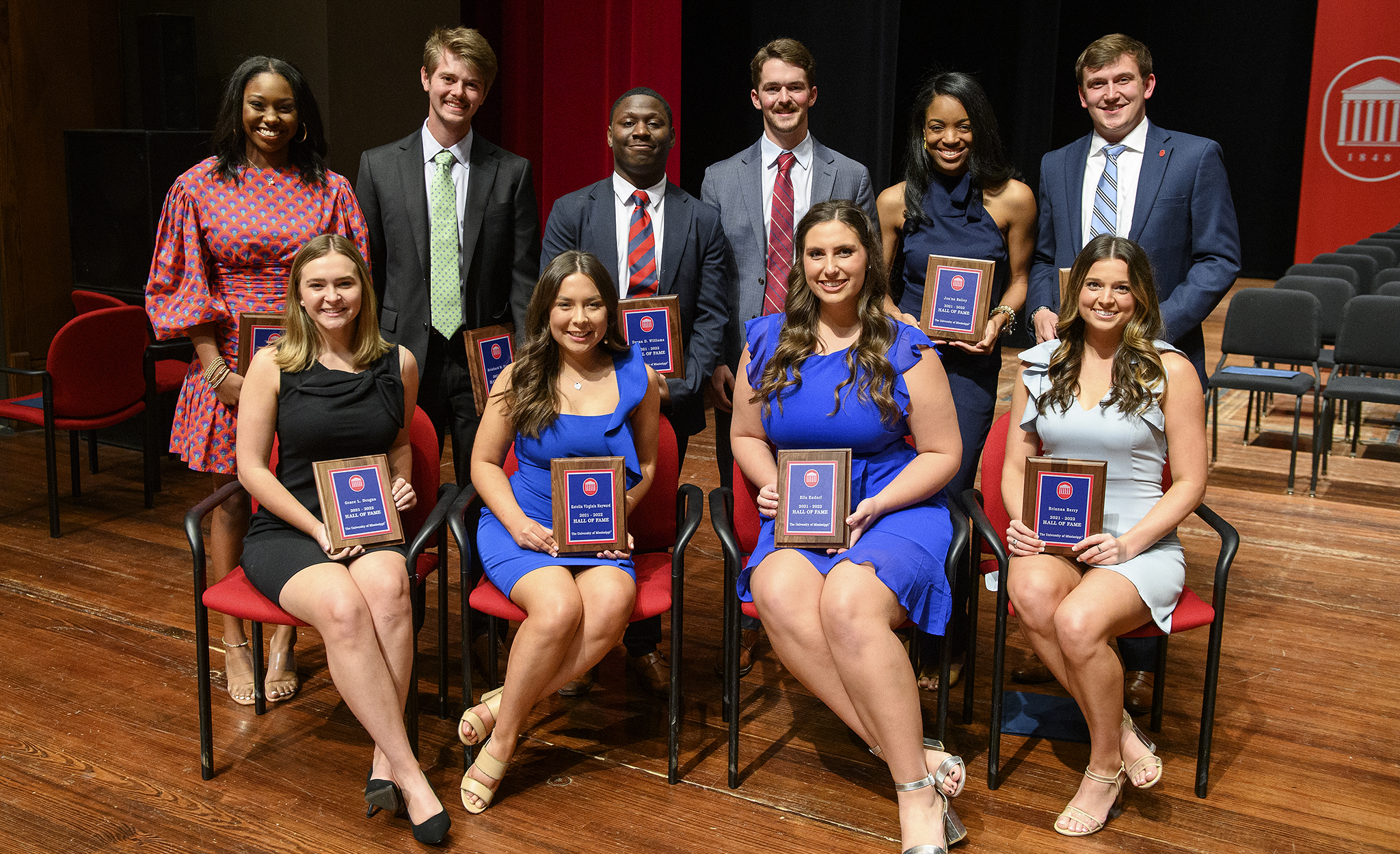 Ten University of Mississippi seniors have been inducted into the university’s 2021-22 Hall of Fame, one of the highest honors given to Ole Miss students.

The inductees were selected by a committee in accordance with policy developed by the Associated Student Body. Selections are based on outstanding contributions in all aspects of campus life.

“The 2022 Hall of Fame class exhibited significant leadership during one of the most unique and challenging times in the history of this institution due to the COVID-19 pandemic,” said Brent Marsh, assistant vice chancellor for student affairs and dean of students. “Nevertheless, they persisted in their academic, leadership, and service endeavors.

“Since the first Hall of Fame inductees were honored in 1930, these students join a long line of individuals who’ve made this university a better place.”

The honorees were introduced during a ceremony Friday evening (April 8) in the Gertrude C. Ford Center for the Performing Arts. 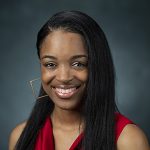 Bailey, a sociology major, has been a member of the Associated Student Body First Year Encounters Freshman Council, Lambda Sigma chapter of Delta Sigma Theta Sorority and Social Action co-chair and president of the Black Student Union. She also mentored the student population at Ole Miss by serving as a FASTrack peer leader, orientation leader and community assistant.

Bailey believes that her greatest accomplishment was establishing the Council for Black Student Affairs.

“This deliberative body has allowed me to focus on the needs of all Black students rather than those directly related to my organization’s interest,” she said. “If I had not seen the significance in repurposing the President’s Circle, issues faced by Black students would have gone unnoticed.” 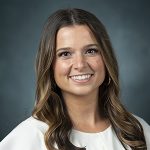 “I believe in breaking barriers, pushing for growth and investing back into those that invest in you,” said Berry, who used her involvement and service to demonstrate to student-athletes that they are more than their sports and can participate in other student organizations across campus.

“With this, I can graduate knowing that I have changed the dynamic of our athletic program and what involvement can look like at Ole Miss.” 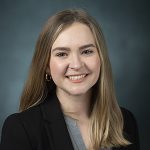 Dragna, a dual public policy leadership and economics major, is a member of the Sally McDonnell Barksdale Honors College, a Lott Leadership Institute student and a member of Kappa Delta Sorority.

“Engaging with prospective students has remained central to my undergraduate experience,” said Dragna, who served in numerous roles in the Associated Student Body and as a pre-college programs summer high school counselor. As a member of the Greek community, she was able to interact with outstanding prospects, share her experiences and connect with students from across the United States.

“My hope is that these students will cement their own legacies over the coming years, but I am hopeful that my legacy starts with them.” 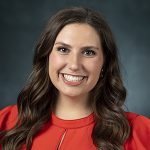 A dual public policy leadership and integrated marketing communications major, Endorf used her involvement in the Associated Student Body to negotiate a pass/fail grading scale at the outset of the pandemic. She served as the only student representative on the Council of Academic Administrators and continued advocating for students through the Keep Learning COVID-19 committee with faculty and administrators.

“I saw the future I wanted for students, and I threw myself into making this system more permanent,” said Endorf, who has held multiple roles in the Associated Student Body and Ole Miss Ambassadors and served as a Lott Leadership Institute peer mentor, Panhellenic Council recruitment counselor and Phi Mu involvement chair.

“The University of Mississippi is stronger when we work together, and I want my legacy to be one of strength through collaboration.” 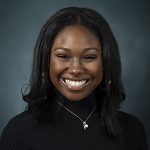 Gordon, a public policy leadership major on the pre-medical track, has been council director for ASB’s First Year Encounters program, Black Student Union director of recruitment and retention, Tri Delta vice president for community relations and an Ole Miss Ambassador. Her greatest accomplishment was serving as executive director of the Big Event.

“Experiencing this showed me what it meant to be a member of a college institution, and how a college is more than just its campus,” Gordon said. “It intersects with a community of people living their daily lives, raising their children and enjoying retirement.”

Being voted Miss Ole Miss by her peers was a humbling experience, she said. “I hope that the legacy I leave behind is one that encourages students to embrace the growth that comes with the college experience.” 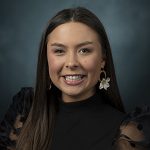 A public policy leadership major, Hayward has held significant leadership roles in the Associated Student Body as executive assistant to the vice president, chair of the Research and Development Council and secretary. She has also been the president for Omicron Delta Kappa and served on the Chancellor’s Commission on the Status of Women and the Lecture Series.

“I am creating a legacy by advocating for all students, shattering the stigma around a gender specific position in our student government and fostering a welcoming environment,” said Hayward, who hopes that her advocacy for the student body will make a lasting change.

“Through advocacy programming initiatives, we have been able to connect with various campus stakeholders, including cultural organizations and university sponsored divisions, to create awareness of these spaces for all of our students.” 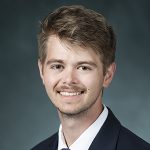 Knerr, a biochemistry major, Stamps Scholar and Barksdale Award recipient, recently was named a 2022 Goldwater Scholar. His collegiate experience has been defined by service to the campus and Oxford communities, mainly focused on Hill County Roots, UM Green Roofs and UM Environmental Coalition.

“I’ve watched myself grow as a leader, a servant and as a person as I’ve worked on this tree farm,” said Knerr, who believes his legacy will be that he helped make the university more sustainable. “My work has given hundreds of college students, public school students and Oxford citizens the opportunity to connect with nature, improve their understanding of Oxford’s environment, smile from the work they’ve done and the causes they’ve helped.” 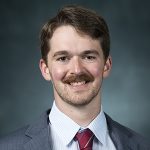 An integrated marketing communications major in the School of Journalism and New Media, McCool has served in the Mississippi Alpha chapter of Phi Delta Theta, serving as historian, social media chairman and vice president for philanthropy, helping raise more than $70,000 for The LiveLikeLou Foundation.

A member of the Lafayette County Fire Department, he completed internships with ESPN and NFL Films and earned five Emmy nominations through his work with Ole Miss Sports Productions.

“I am confident that I will never again meet a stranger at the University of Mississippi because I have been welcomed into and embraced what so many know as the ‘Ole Miss family,’” McCool said. 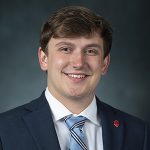 to act on that to leave this place better than I found it,” he said. “I hope my legacy proves you can be whoever you want to be at Ole Miss.” 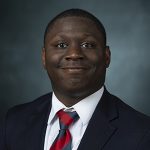 Williams is a dual economics and political science major. During his time on campus, he served as Interfraternity Council’s vice president of diversity and community engagement, UM Black Caucus president and a member of the Columns Society.

“I have dedicated myself to make every part of campus that I touch welcoming to everyone by pushing for inclusive initiatives that will lead to the betterment of not only our beloved campus, but also the community.”