Ten Seniors Awarded Hall of Fame Distinction Based on Excellence in Academics, Service

Ten University of Mississippi seniors have earned entry into the school’s 2012-13 Hall of Fame, the university’s highest honor.

Provost Morris Stocks bestowed the honor Friday (Jan. 25) in a campus ceremony at the Ford Center for the Performing Arts, noting that the selection is based on a student’s academic achievement, community service, extracurricular activities and potential for future success.

“Since 1930, induction into the Hall of Fame has been recognized as the highest honor a student can receive at the university,” Stocks said. “Hall of Fame recipients are chosen by a committee pursuant to ASB policy. Previous inductees have brought distinction to the university as leaders in government, medicine, law, journalism, business, entertainment, education, the ministry and a variety of other fields. Those of you selected this year join an elite group.” 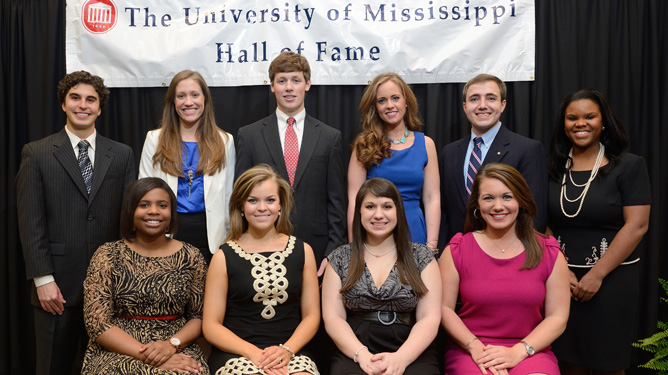 The 10 outstanding seniors inducted into the 2012-13 University of Mississippi Hall of Fame are (front, l-r) Lauren Wright of Tupelo, Stevie Farrar of Waynesboro, Emily Roland of Meridian and Margaret Ann Morgan of McComb, and (back, l-r) Douglas Odom of Jackson, Maggie McFerrin of Belden, Brian Barnes of Atlanta, Sarah Robinson of Brandon, Jess Waltman of Quitman and Kimbrely Dandridge of Como. UM photo by Nathan Latil.

The 10 students, along with 141 other Ole Miss seniors, were also recognized for inclusion in Who’s Who Among Students in American Universities and Colleges. They are to be listed in the national publication’s 2013 edition.

Students named to the Hall of Fame are Brian Barnes of Atlanta, Kimbrely Dandridge of Como, Stevie Farrar of Waynesboro, Maggie McFerrin of Belden, Margaret Ann Morgan of McComb, Douglas Odom of Jackson, Sarah Robinson of Brandon, Emily Roland of Meridian, Jess Waltman of Quitman and Lauren Wright of Tupelo.

Barnes, a public policy leadership major, is a member of the Sally McDonnell Barksdale Honors College and Trent Lott Leadership Institute. He received a Taylor Medal, the university’s highest academic award, and is a member of Phi Kappa Phi, the university’s highest academic honor across all disciplines. He belongs to Mortar Board, an honor society recognizing outstanding scholarship, leadership and service. He served as president of the Interfraternity Council and member of the Vice Chancellor of Student Affairs Student Advisory Committee. He received a Chancellor’s Scholarship and has been listed on the Chancellor’s Honor Roll every semester. As a member of Gamma Beta Phi honor and service society and the SMBHC Community Action, he worked with Million Meals Challenge and LIFT Community Services. He is the son of Allen and Gene Barnes of Atlanta.

Dandridge, a journalism major, is president of the Associated Student Body and former president of the Black Student Union. She is a Rotary Scholar and Northwest Mississippi Realtors Scholar. Last summer, she joined 10 other university student body presidents, on a trip to Russia to meet with that country’s leaders to discuss ways to improve the relationship between the two countries. She is a member of One Mississippi, a student coalition that promotes social integration within the student body. She served on three chancellor’s standing committees: athletics, sensitivity and respect, and student affairs, and on the Vice Chancellor for Student Affairs Advisory Council. Her volunteer efforts include work with Relay for Life, Children’s Miracle Network, Como Public Library and Le Bonheur Children’s Hospital. She is the daughter of Earnest and Deborah Dandridge of Como.

Farrar, a business administration major, is a mentoring member of the SMBHC. She served as assistant director of outreach for UM’s Big Event, a major annual student-led community volunteer effort, and co-director of policy for One Mississippi. A member of Phi Kappa Phi, she is an Academic Excellence Scholar, Leadership Scholar, Phi Mu Presidential Scholar and School of Business Administration Charles E. Baker Scholar. She represented Mississippi at the Hugh O’Brien Youth Leadership World Conference. She has been a volunteer for Le Bonheur, Children’s Miracle Network, Leap Frog tutoring and more. Her parents are Steve and Linda Farrar of Waynesboro.

McFerrin is majoring in exercise science. She is co-captain of the Ole Miss Lady Rebel basketball team and member of the Student Athletic Advisory Committee, which seeks to improve issues affecting student athletes. She was listed on the 2011-12 SEC Academic Honor Roll and was UM’s 2010-11 Outstanding Scholar Athlete. She is a member of the Order of Omega interfraternal leadership honorary, Gamma Beta Phi academic and service honor society, and National Society of Collegiate Scholars. Her volunteer efforts include motivational speaking for Healthworks and work with Habitat for Humanity, Lafayette County Food Pantry and Cystic Fibrosis Walk. Her parents are Jack and Amy McFerrin of Belden.

Morgan, a journalism major, serves on the student advisory board in the Meek School of Journalism and New Media. She was a 2012 member of the National Board of Directors for Order of Omega. She is a mentor for and a former co-director of Freshman Focus. She is a member of Mississippi First, a student organization that works to define and advocate sound public policy solutions for the state’s democracy. She served on the Chancellor’s Standing Committee for Sensitivity and Respect. She is a member of the Columns Society, a group of 24 students who serve as official hosts for the university. Her volunteer efforts include two working trips to Belize as a member of the San Mateo Empowerment Project, and she spent spring break 2011 in Haiti assisting with medical care, teaching in a school and helping build a hospital. She is the daughter of Tommy Morgan of McComb.

Odom, an English major, is a mentoring member of the SMBHC. He is a member of the UM Judicial Council, ASB Judicial Council, Senior Class Executive Committee, Chancellor’s Standing Committee: Lecture Series and UM Big Event Executive Committee. He is co-president of Omicron Delta Kappa, co-director of the Big Event and community service chair of the Columns Society. He has been listed on the Chancellor’s Honor Roll every semester, and his scholarships include National Merit Finalist, Luckyday Merit, Chancellor’s, Honors College and Classics Departmental. He is a member of Phi Kappa Phi and Mortar Board. Besides his work with the Big Event, his volunteer efforts include Relay for Life, Habitat for Humanity and Leap Frog. His parents are Doug and Walterine Odom of Jackson.

Robinson, a public policy leadership major, is a member of the SMBHC and Lott Institute. She is co-director of the Big Event, and she has served as an ASB deputy attorney general and community service co-chair of both Freshman Focus and Senior Class Council Fundraising. Listed on the Chancellor’s Honor Roll, she is a member of Phi Kappa Phi and Order of Omega. A Lott Scholar, she participated in the Lott Leadership Exchange to South Africa. She has served as a mentor for the Lott Leadership Institute and Freshman Focus. Her volunteer efforts include work at Azalea Gardens Retirement Community and Mississippi School for the Blind. Her parents are Bob and Jan Robinson of Brandon.

Roland, a journalism major, is editor-in-chief of UM’s student-run newspaper, The Daily Mississippian. Her other posts at the DM have included copy chief, managing editor, campus news editor and lifestyles editor. She is president of the Society of Professional Journalists and member of the National Society of Collegiate Scholars. Listed on the Chancellor’s Honor Roll, she received the Community Foundation of Greater Jackson Scholarship. Her parents are David and Denise Sisson and Will and Cindy Roland, all of Meridian.

Waltman, an accountancy major, is a mentoring member of the SMBHC. He is a member of Phi Kappa Phi, Order of Omega, Omicron Delta Kappa and Mortar Board. He is ASB parliamentarian and a former senator, Undergraduate Council student representative and a mentor for First Year Experience, an academic course designed to help freshmen make a positive transition from high school to college. An Ole Miss Ambassador, he was the 2012 co-director of campus tours. He served the Big Event as a team leader and logistics committee member. He is a volunteer at Camp Lake Stephens and for the Journey of Mississippi. He is the son of Walt and Cheryl Waltman of Quitman.

Wright, a public policy leadership major, is a member of the Lott Leadership Institute. She is president of the Black Student Union and vice president of the Columns Society. She is a member of One Mississippi and an Ole Miss Ambassador. She had been a leader in the Big Event, including service as assistant director and co-director of transportation and logistics. Her ASB posts have included senator, and service on the communications committee and diversity affairs committee. She has served on the Vice Chancellor’s Student Advisory Board. She has been a mentor for Freshman Focus and Lott Leadership and a counselor for Summer College. She has volunteered for the Salvation Army, More Than a Meal, Out of Darkness Suicide Prevention Walk, the Boys and Girls Club and more. Her parents are Charles and Linda Wright of Tupelo.