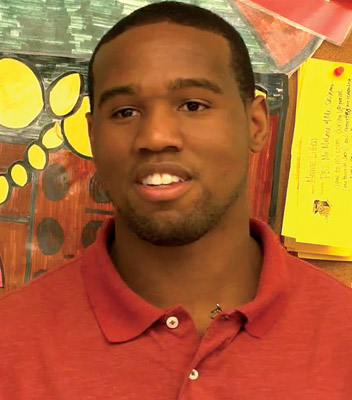 Cornell grew up in Azusa, California, and received a football scholarship to UM where he earned a B.A. in political science in 2011. “He’s extremely positive and wants to share his experiences,” said Aaron Johnson, acting Teacher Corps program manager. “He came from a challenging background, became a successful football player, and then a teacher in a critical needs school. He reaches out to students and teaches in an almost coaching fashion.”

Cornell uses techniques learned on the field and in the classroom. “I knew we were reaching him when he started drawing parallels between theories of international conflict and football,” said Susan Allen, associate professor of political science. “I have no doubt that his students in Meridian are starting to make connections between the things they learn in Mr. Cornell’s class and their everyday lives.”

For one of Allen’s classes, Cornell remembers submitting drafts of a research paper while the professor repeatedly asked him to reevaluate his work with questions such as “Why do you think this?” and “Why do you propose that?” Today he brings the same challenge to his students. He also applies his football experience to his new career. “I remember Coach O used to always tell us ‘be a pro’,” he said. “I didn’t fully understand until I joined the Teacher Corps. As a teacher you have to be a pro every day with all that you do.”

Not unlike athletes, teachers review their performance on video and address strengths and weaknesses as classroom leaders during the program’s rigorous summer training. “You’re thrown out there and you either sink or swim. The majority of us end up swimming but a few end up sinking,” Cornell said. “That strengthens you.” The UM School of Education recognized Cornell’s success with its student of the month award last February. 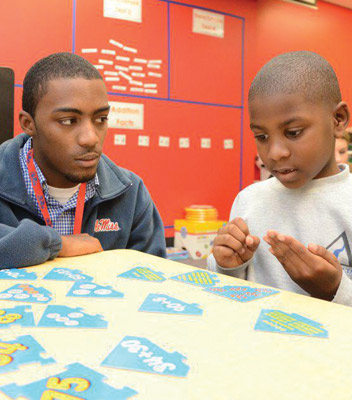 The University of Mississippi Hall of Fame student from Calhoun City (B.A. public policy leadership and English, ’12) became interested in the career when he spoke to the Mississippi House of Representatives’ education committee about charter schools. “After that, I understood the challenges the state faced providing all children with high-quality education, and I had to do something different and it wasn’t through policy,” Moss said. “I knew I had to be a classroom teacher to make a difference.”

Moss is a member of Teach for America, a national corps of leaders who commit to teach for two years in low-income communities to ensure that kids receive an excellent education. His first choice location was the Mississippi Delta and he plans to remain long after his commitment is up.

“I think my students understand the reason I am in the Delta, that I am a Mississippi boy and face challenges like they do,” said Moss, who eventually wants to become a school administrator. “As an African American male, I can say that I’ve done this and it’s possible for you to do the same—but it takes hard work.

“Looking back on my college experiences, every Associated Student Body meeting and public policy leadership class challenged me to think outside of the box to convince and educate; that is the art of teaching in the Mississippi Delta. I do that every day now. I am eternally grateful for those experiences.”