Summit to Focus on Women and Civic Engagement 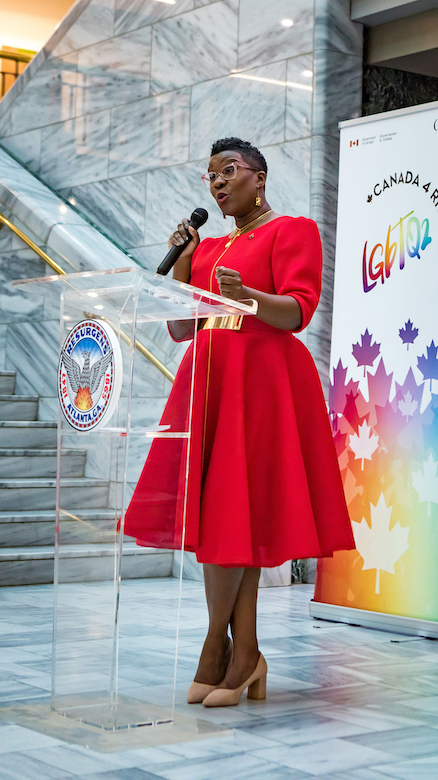 Nadia Theodore, consul general of Canada in Atlanta, is set to deliver the keynote address Feb. 19 at the inaugural Carolyn Ellis Staton Women in Government Luncheon during the UM Women and Civic Engagement Summit. Submitted photo

In honor of the centennial anniversary of women’s suffrage, the Sarah Isom Center for Women and Gender Studies at the University of Mississippi is planning a half-day summit Feb. 19 featuring an inaugural memorial luncheon, discussion groups and networking opportunities.

The UM Summit on Women and Civic Engagement will feature a wide range of conversations about the many ways that women are engaged in larger communities: running for office, organizing nonprofits, building community, starting businesses, advocating for change and transforming institutions. This event, at The Inn at Ole Miss, is free and open to public.

“2020 marks the 100-year anniversary of the passage of the suffrage amendment, which opened up new means of political expression for women,” said Jaime Harker, Isom Center director. “That, plus the beginning of the political season with the presidential election, seemed like a good time to consider women’s political investment and influence, broadly understood.”

The day will begin with the inaugural Carolyn Ellis Staton Women in Government Luncheon. A trailblazer who became the university’s first female provost, Staton joined the Ole Miss faculty in August 1977. During her 32-year tenure, she served as a professor and interim dean in the School of Law, associate provost and provost before her retirement in 2009.

Nadia Theodore, consul general of Canada in Atlanta, will deliver the keynote address at the luncheon.

Theodore joined the Canadian civil service in 2000. She has made her career in the Trade Agreement and Negotiations Branch of Global Affairs, holding leadership positions on several recent and major trade initiatives of Global Affairs Canada, including serving as one of the two deputy chief negotiators for the Comprehensive and Progressive Agreement for Trans-Pacific Partnership and as the executive director of Canada’s Secretariat for the Canada-European Union Comprehensive Economic and Trade Agreement.

After lunch, roundtable conversations will be conducted on the themes of: historical movements, political leadership, entrepreneurship and community activism.

Part of the Sarah Isom Center’s mission is to explore women’s roles, history and accomplishments through programming. Summit organizers said they hope participants will receive at least two things from having attended the event.

“We hope, first, to showcase the diverse and inventive ways women are leading in our community, including holding public office and organizing, but also leading at the university, in nonprofits, in business, and in regional and national organizations,” said Kevin Cozart, Isom Center operations coordinator.

“Second, we hope that learning about these varied ways there are to make a difference will inspire the attendees to consider their own investment in civic engagement.”

To learn more about the event or to register, visit https://sarahisomcenter.org/wce.